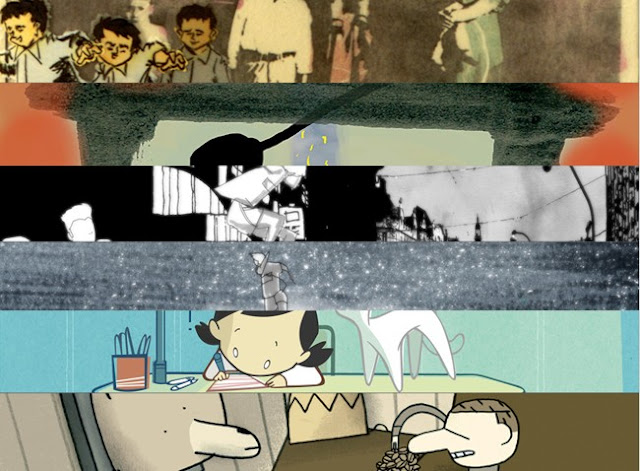 As part of its Canadian Spotlight, the Toronto Reel Asian International Film Festival hosted an evening with renowned NFB producer Michael Fukushima on November 7, 2012 entitled Michael Fukushima: The Art of Producing Art.  The evening was moderated by Aram Siu Wai Collier and featured both conversations with Fukushima and a selection of films.  Fukushima notably worked with Koji Yamamura on Muybridge’s Strings (2011).  Other notable animated shorts that he has produced include Christopher Hinton’s Genie-award winning cNote (2005) and Ann Marie Fleming’s I Was a Child of Holocaust Survivors (2010.) The evening’s proceedings were uploaded onto YouTube.  I have summarized the proceeding below with some added context and links to related NFB content.


Due to technical difficulties they weren’t able to screen cNote (but you can watch it online here).  The evening began with Fukushima’s directorial debut Minoru: Memory of Exile.  Fukushima was very modest about his abilities as an animator, but this is a very impressive film which I have been meaning to write a review of for some time.  Fukushima’s proposal for this film is what brought him to the NFB in 1990.  His invitation was thanks to what he called “a whole series of wonderful serendipitous convergences.”  His proposal landed on producer William “Bill” Pettigrew’s desk at around the same time that he was asked to look into funding projects that addressed the internment of Japanese living on the west coast of British Columbia during the Second World War.  This followed in the wake of Prime Minister Brian Mulroney’s historic apology to Japanese Canadians on September 22, 1988 and the compensation offered to victims of the internment.  The redress included funds for educational materials.

Minoru: Memory of Exile by Michael Fukushima, National Film Board of Canada


Minoru: Memory of Exile is an animated documentary about Fukushima’s father Minoru and his experiences during and after the internment.  It took about two years to make this 18 minute film which was handmade and shot on film.  It won a couple of awards including Best Short Documentary at the Toronto Hot Docs festival in Toronto in its inaugural year.  At the time, the genre of animated documentary was a new form.  Fukushima himself had actually conceived of the film as a completely fictional animation but during the development process, it became clear to Fukushima and Pettigrew that in order to make the story more poignant, it needed to have more of an element of the real.

Pettrigrew had himself started out at the NFB as a documentary filmmaker with films such as Kuralek (1967), Oskee Wee Wee (1968), Epilogue (1971), and The Vinland Mystery (1984) and recognized the potential of bringing animation and documentary together.  It had never occurred to Fukushima before that one could “marry documentary and animation” so this was a significant moment in the creative process for him.

The producer David Verrall helped Fukushima edit his film.  Verrall produced more than 240 films during his NFB career including Bob’s Birthday (Alison Snowden and David Fine, 1993), When the Day Breaks (Amanda Forbis and Wendy Tilby, 1999), Village Idiots (Rose Newlove, 2000), Ryan (Chris Landreth, 2004), The Danish Poet (Torill Kove, 2006).  Through his experiences with Verral and Pettigrew, Fukushima “came to realize that being a producer is more than just being a manager” and said that he thought that “it was at that moment that the seed was planted” for his trajectory to becoming a producer.

I was surprised to learn that Fukushima was initially resistant to the idea of making Minoru the film more personal because “It was still raw.  I honestly didn’t think I could do it.  .  .  to give justice to the story.  .  .”  He had only just recently discovered the story of his father because of Minoru Fukushima’s receiving of a compensation package from the government.   This had prompted his father to tell him the story.  Fresh out of college and with no experience with documentary filmmaking, Fukushima was concerned about how to tackle the subject matter.  At the time there was a huge debate in the documentary community about “veracity” with people asking “Who gets to tell stories?” and it seems that Fukushima was very sensitive about this.  In the end, Pettigrew recognized the potential for how Fukushima as an artist could make the important story his father had to tell much more accessible and poignant for audiences while at the same time being “very subversive.”  Fukushima credits Pettigrew with teaching him that “animation has a way of sneaking up on audiences and catching them unawares, and having a greater impact because of that.”

After Minoru, the Reel Asian audience watched Flutter (Howie Shia, 2006) and Jamie Lo, small and shy (Lillian Chan, 2006).  Jaime Lo came out of the Talespinners Collection which was an initiative designed to encourage young, relatively inexperienced animators who reflect Canada’s ethnic diversity to make animated films for children.  First the NFB took the “safe route” of optioning a number of children’s books by non-white authors to adapt.  Fukushima produced one of this first batch of films and while he was pleased with the result felt that they could push it further and suggested putting out a call for proposals from young filmmakers about the minority experience in Canada.   It was through this they discovered great talent like Lillian Chan and Jonathon Ng.  They produced some terrific films for kids that were not necessarily about “being Asian” or “an ethnic minority” but were rather “coloured by their experience of being Asian.”


Flutter by Howie Shia, National Film Board of Canada


Fukushima was introduced to Howie Shia by the Hothouse emerging filmmakers programme for which Shia had made the great short short animation Ice Ages (2004).  Shia came to Fukushima with the idea behind Flutter: a boy that just “runs and runs and runs.”  It turned into what Fukushima calls a “beautiful, elegiac poem about search; about love; about how.   .  .  you just have to dive into life and life takes you.  .  .”  The film went on to win the Open Entries Grand Prize at the Tokyo Anime Awards in 2007 – the first animation produced outside of Asia to do so.


Asthma Tech by Jonathan Ng, National Film Board of Canada


After the films were screened Lillian Chan and Jonathan Ng – director of another great Talespinners film called Asthma Tech (2006) – joined Fukushima on the stage to discuss Fukushima as a producer.  Ng was concerned that he might end up becoming too “gushing” about Fukushima.  He praised him as behind different from other producers because he has a knack for understanding the needs of the director.  In Ng’s case, he likes to be left alone during the creative process and he was appreciative of the fact that Fukushima gave him “a lot of leeway,” which is quite remarkable as Ng did not have a lot of experience as an animator at the time.

Collier asks if this hands off approach is something Fukushima tailors to specific animators or if it is his “style” as a producer and Fukushima says that to him “getting engaged on a filmmaker’s personality and their working style is fundamental to being a good producer for me.  It’s a relationship.  With animation it can be a 2, sometimes 3 year relationship and it’s pretty intimate.” Because of the deep emotional investment that he has as a producer, it’s important to Fukushima that he find animators with whom he can foster a good working relationship.   He sees no point in badgering an artist like Ng, who prefers to be left alone, when that won’t bring any results.  He also mentioned that he enjoys picking apart films and discussing them, but finds that it isn’t always productive or useful.  It sounds like a very delicate process.


Jaime Lo, small and shy by Lillian Chan, National Film Board of Canada


Lillian Chan said that she moved to Montreal to work on Jaime Lo, small and shy and that Fukushima warned her at the outset that production meetings can sometimes involve tempers and people walking out of the room and that that was okay and a normal part of the process.  Chan was surprised to realize that it could be “that intense of a process.”  She doesn’t recall having any shouting matches with Fukushima herself, but she remembers that initially the story for the film wasn’t fully fleshed out and she was given several months just to work on the story.  She really respects Fukushima for giving her the time that she needed to get to the right space with the film on her own.  Fukushima would give her a critique of the film that would identify very precisely what the problems were with the film, but would not tell her how to solve the problem.  She wanted definitive answers for her problems, but Fukushima instead offered suggestions, encouraging her to problem-solve issues on her own.  This forced her, Chan explained, to come to terms with her own creative process.

Chan asks Fukushima how he finds it different working with young filmmakers like her and Ng as opposed to more experienced filmmakers as she imagines that this would be a different experience.    Fukushima claims that there is often very little differences working with a veteran as opposed to an emerging filmmaker as long as the framework of the roles of producer and director have been set up clearly from the beginning.   He addresses the fact that it is not only a two way relationship but a three way relationship which includes institution of the NFB.  The NFB is “a very scary beast for veteran filmmakers and it must be terrifying for younger filmmakers.”  The most important thing for Fukushima is establishing his relationship with the filmmaker.  He sees his role as not only an advocate and champion of his artists, but also someone who will challenge them artistically.  The only difference is that veteran filmmakers tend to have greater self confidence and a greater sense of what will work and won’t work for them artistically.


The final film of the evening was Patrik Doyon’s Oscar nominated film Dimanche (2011).  Like Ng, Doyon was not classically trained as an animator, but rather had training in illustration.  He also came into contact with Fukushima through the Hothouse project.  After Hothouse, Doyon approached the NFB with a proposal about life as a child in rural Quebec .  It ended up being a co-production with the French language ONF studio (the French branch of the NFB).  Dimanche won Doyon the 2012 Jutra Award for Best Animated Film.  Many people at the NFB pushed it as a children’s film, but Fukushima obviously thinks that it is more than that.  They pushed the NFB to send it to the Berlinale where it won a prize, which led the NFB to get behind the film even more.

Unfortunately they seem to have run out of time at this point in the evening.  I had been looking forward to hearing to listening to Fukushima talk about his transition from director to producer.   He seems to have a close relationship with Reel Asian however and there was a suggestion that they would invite him back at some point in the future.  I was impressed by Aram Siu Wai Collier as the moderator for the event.  He asked very thoughtful and engaging questions.  With the online availability of these superb short films plus the video record of the event, it was the next best thing to being there in person.