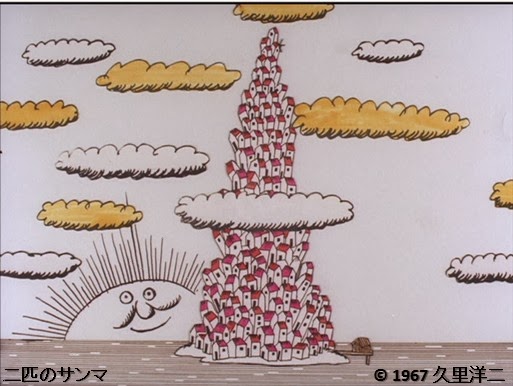 In 1967, the experimental animator Yōji Kuri remade his 1960 animated short Two Grilled Fish (二匹のサンマ).  This new version has the same basic plot as the original film, which I described in an earlier post.  It also has the same overall theme of theme of well-intentioned people with a desire to live in peace and harmony being thwarted by external forces (politics, war, communities) beyond their control. 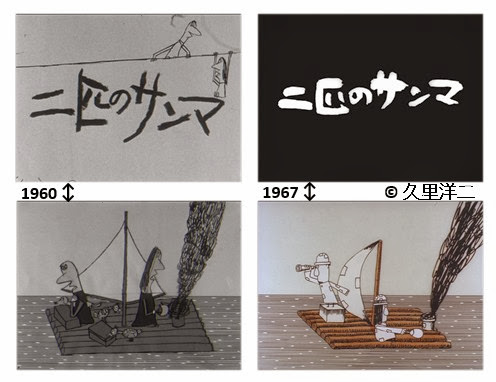 The original film was shot in black and white, but the 1967 version uses colour.  As is typical of Kuri, the colour is used sparingly.  Some of the scenes, such as the idyll of the couple’s island paradise before the invasion of technology and outsiders, more rendered more eye-catching by this stylistic choice.   The change in film stock also suggests that Kuri had a higher budget for this film.

There are also differences in character design.  For the central protagonists, the couple, these changes are only minor:  they are now wearing hats and come to the island without their dog and their chickens.  The most startling difference is to the character design of the outsiders who invade in the island.  In the original version, it was an assorted mixture of men and women with no identifiable nationality.  In this second version, the invaders are bearded men dressed and are very obviously an ethnic Arab stereotype.  The men invade the island and use the scientist’s machine to produce women, with whom they pair off and create babies who help them take over the island. 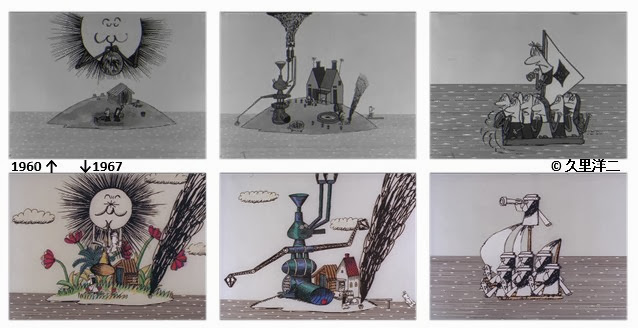 There was a lot of unrest in the Middle East in the 1960s – the Six-Day War occurred in 1967, for example.  I am not well versed enough on the Japanese perspective on the Middle East at this time to speculate on what Kuri was trying to say by using these characters but it makes for fascinating viewing.  Post-9/11 the image of a giant rocket sticking out of a skyscraper seems chillingly prescient.   It got me to wondering about what Kuri’s wartime experiences were.  I know from his official bio, that his father was a soldier and was absent for much of his childhood years.  He was also still living in his home prefecture of Fukui when the terrible earthquake struck that region in 1948.  I imagine the average person growing up in Japan in the 30s and 40s would be acutely aware of how external forces can affect a person’s life irrevocably.

As for the animation itself, the movements in the 1967 version of Two Grilled Fish are smoother and the film has been more tightly edited.  Some of the shots in the original version lagged slightly.  My intuition tells me that the differences in editing can be mainly attributed to experience.  In 1960, Kuri had only just begun to experiment with animation as an artistic medium, but by 1967 he had at least two dozen films under his belt.  He also had the assistance of his protégée Taku Furukawa (Speed, Jyōkyō Monogatari) who had been under his mentorship since 1963 and would go on to become one of Japan’s top independent animators in his own right.

Another significance difference between the two versions of Two Grilled Fish is the soundtrack.  The original film featured experimental sound designed by the avant-garde composer Kuniharu Akiyama with a narrated text by poet Shuntarō Tanikawa.  Although there is still a cutting edge element to this new soundtrack thanks to effects by Hiroshi Yamazaki, who also collaborated on Kuri’s films The Midnight Parasites (1973), the film has a completely different feel to it because of the addition of the pop song Sekai wa Futari no Tame ni (世界は二人のために / The World was Made for Only the Two of Us) sung by Naomi Sagara.  It is a very catchy song, with the theme matcheing perfectly to the animation.  As much as I like the poet Tanikawa, the narration in the first version did not really add much to the interpretation of the film --- and in general I prefer when animators use narration and dialogue sparingly.  The lilting of Sekai wa Futari no Tame ni when it is reprised at the end reminded me of Stanley Kubrick’s ironic use of Vera Lynn’s “We’ll Meet Again” at the end of Dr. Strangelove (1964). 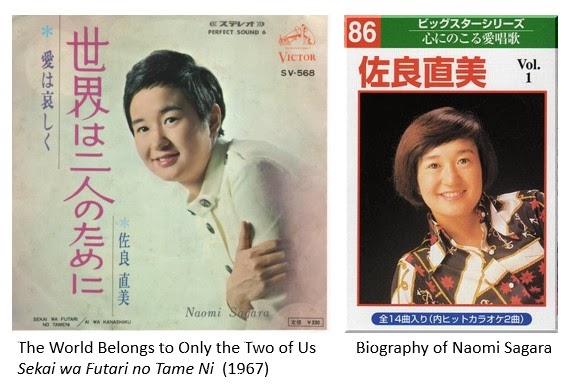 Although it seems incongruent for Kuri to use a pop song when most of his films use avant-garde soundtracks, there is a subversive element to Naomi Sagara herself.  Sekai wa Futari no Tame ni was Sagara’s first hit song and marked the beginning of her successful recording and TV career.  Her career peaked during the 1970s when she appeared more than a dozen times on the Kōhaku Uta Gassen – the popular annual New Year’s Eve Special – an honour bestowed only on those who have “made it”.   She even hosted the programme five times (1972, 1974-7).  While this all indicates that she was mainstream, Sagara was subversive because of her gender ambiguity.  She has a deep singing voice which means she gets mistaken for being a young man – and she also dressed (and continues to dress) in a masculine way.  She rejected the miniskirts of the era in favour of suits and has always cut her hair short.  Despite these obvious signals about her sexuality, her lesbianism was a closely guarded secret until she was outed in 1980 by a bitter ex-girlfriend.  This caused her to leave the spotlight for a long time.  She apparently ran her family’s business for many years but is happily back in the spotlight these days not only as a recording artist but as a dog expert (see her book!).  I love her voice so I am a bit biased when I say that the song adds greatly to the appeal of the film. 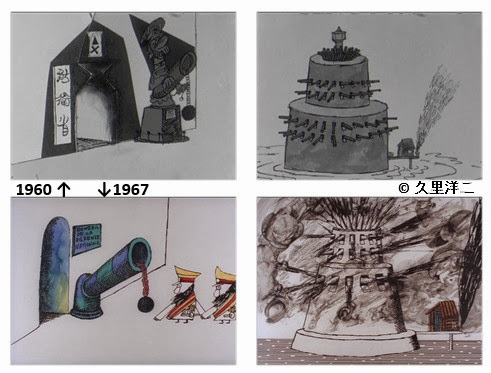 I suspect that the key reason behind much of the changes between the two versions of Two Grilled Fish has to do with the intended audience.  In 1960, Kuri was just testing the waters domestically with his unique brand of animation.  By 1967 he had an international audience for his works.  Thus, the 1967 version has English and French text instead of the Japanese of the original.  This is not just in the opening credits but also within the action of the film itself (ie the label on the entrance to the Ministry of Defense in the war scenes).  With an international audience in mind, Kuri also made two versions of Au Fou! (殺人狂時代 / Satsujin Kyōjidai)) – 1965 for the original and 1967 for the international version.  Kuri made a splash on the international festival scene in the early 1960s with his profile boosted significantly when he won the Special Jury Award at Annecy in 1963.  This new version of Two Grilled Fish won Kuri an award at Oberhausen in 1968.  He also won his second Noburo Ofuji Award at the Mainichi Concours in 1968 for Two Grilled Fish and The Room (部屋/Heya, 1967).

The film appears on the Universal Geneon DVD:

The Collected Works of Yoji Kuri

This review belongs to my series on the Noburo Ofuji Award:

Posted by Cathy Munroe Hotes at 7:16 am