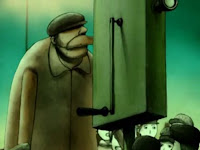 This year Kunio Katō (加藤 久仁生 b.1977) won the Annecy Cristal at the Annecy International Animation Festival for his latest film La maison en petits cubes (Tsumiki no Ie) as well as both the Hiroshima Prize and the Audience Prize at the Hiroshima International Animation Festival. In so doing he is following in the footsteps of Kōji Yamamura who won the Annecy Cristal (in 2003 for Atama Yama) . Yamamura took the Grand Prix at Hiroshima this year for Kafuka Inaka Isha, as well as in 2004 for Atama Yama.

While Katō may be following in Yamamura's steps in terms of winning prizes at festivals, his animation style is very different. The Diary of Tortov Roddle (Aru Tabibito no Nikki, 2003-4), which showed at Annency in 2004 under the category films for the the internet, demonstrates Katō's distinctive style, which Iwa ni Hana likens to the art of Raymond Peynet.

The Diary of Tortov Roddle seems to be the films official English title, but I prefer the more literal translation of the Japanese title: A Traveller's Diary. The film consists of a series of six dream-like vignettes, each approximately two minutes in length, in which a tall, slender man wearing a tall top hat and riding a pig with long, giraffe-life legs recounts his travels through a strange and unusual land. 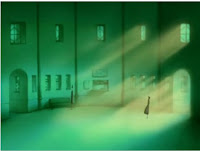 1.The City of Light (Hikari no to)
2.Midnight Cafe (Mayonakan no Kouhii-ya)
3.The Little Town's Movie Gathering (Chisana Machi no Eigakai)
4.Moonlight Travellers (Tsukiyo no Tabibito)
5.The Meloncholy Rain (Yuutsu na Ame)
6.The Flower and the Lady (Hana to Onna)

Each vignette contains an element of the surreal: cities on the backs of frogs, a fish jumping out of a coffee cup to eat a butterfly, an outdoor cinema projected onto the back of a shirt-wearing bear, slender rabbit people riding off into the sky aboard a flying streetcar, and so on. Vignette #3 seemed inspired both in theme and music by Cinema Paradiso (Guiseppe Tornatore, 1988) , and the flying streetcar in #5 is reminiscent of Galaxy Express 999 (銀河鉄道999, Rintaro 1979).

Katō uses a rather dark, blue-grey-green colour palette in The Diary of Tortov Roddle. His use of clean lines with a fill that has the softness of watercolour is the same aesthetic he uses in his work as an illustrator (examples here and here). He really would make an excellent illustrator of children's picture books. The softness of the fill and the warmth of light flooding into scenes, usually from a single light source like a lamp or window, mean that the film has an atmospheric, slightly melancholy tone without becoming overly gloomy. 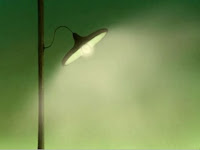 The film is also prevented from becoming too melancholy by the marvelous sense of humour that Katō infuses into each vignette. Even the gloomiest of vignettes, such as The Melancholy Rain, end on a positive note with a page from Tortov Roddle's journal putting an optomistic slant on the recounted events. The music also becomes less melancholy with each short film ending with an upbeat musical refrain.

The surrealism of the film is indicated not only by the unusual characters and events that inhabit the mysterious, fictional world that Tortov Roddle travels through, but is also indicated by the slightly off-kilter framing choices. Often the main action or character within a frame is off-center, as in this still taken from the opening of the first vignette. 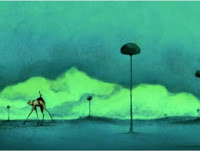 There are many clever framing choices in Tortov Roddle that create interest on the part of the spectator. In vignette #5 there's a great unexpected shot from the ground looking up with the rain falling directly onto the camera. Another great example is the moment in vignette #3 when the movie being projected in the town square is shown from the perspective of the bear acting as the movie screen. 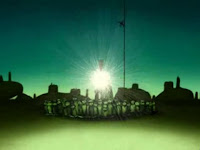 The music for the film was composed by Kenji Kondo. The animation was produced by Emi Matsumoto at ROBOT animation studio where Katō works alongside other young animators/directors Tatsutoshi Nomura, Takuya Inaba, and Osamu Sakai.

The DVD of this film is available at cdjapan, as is his latest award-winning film Tsumiki no Ie. I am hoping to get my hands on it sometime this month.