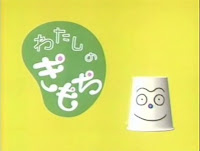 This short animation produced for the NHK by Aiga areba daijobu is one of my kids' most favourite Japanese television shows (along with Anpanman, Pokemon, and Ichi-jo-man). The Watashi no Kimochi (My Feelings) stop motion animation shorts (usually 2-3 minutes in length) aim to encourage children to openly talk about their emotions. The shorts feature an animated paper cup character who goes by the name Kimotchi (キモッチ) who directly addresses the child spectator and asks the child to participate in games and to follow him on his impulsive adventures, both real and imagined. Kimotchi makes many silly faces and asks the child spectator to guess how he is feeling.

My children howl with delight at Kimotchi's silly antics and word play. Kimotchi particularly enjoys playing games with the Japanese language, making up tongue twisters in an apparently spontaneous manner. The success of the Kimotchi character is due in a large part to the skillful voice acting by Sadao Abe (阿部サダヲ). Abe is a well-known actor (Kamikaze Girls, Kisaru Cat's Eye, First Kiss) and lead singer of the wild & crazy rock band Group Tamashii [check out their hilarious hit song "I Want to Buy You Some Juice" 君にジュースを買ってあげる♥, Kimi ni Juice wo Katte Ageru - this live clip includes some amusing banter with Kotoōshū, who looks like a giant in the front row of the audience]. 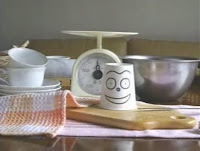 The animator Mitsuo Shionaga (潮永光生) is the creative force behind Watashi no Kimochi, acting as director, storywriter and character designer. Jun Sasaki (佐々木隼) and Hirofumi Oohashi (大橋弘典) of mupy animation, who regularly do animation for NHK, are responsible for the animation. The concept of an animated paper cup is clever in its simplicity, there are a number of challenges to be overcome in order to execute it as well as Sasaki and Oohashi have. For one thing, drawing on a paper cup is tricky and I wondered when watching it how in the world they managed to do the frame by frame continuity when drawing on a curved surface is so challenging. Fortunately, Sasaki's blog features wonderful entries complete with behind-the-scenes photos that answered all my questions about how they animate the paper cup. Sasaki has even posted a template of the Kimotchi (キモッチ) figure so folks at home can try making their own. He also demonstrates how they draw the character's face flat and then shape it into a cup. Here are some photos of the hundreds of drawings that they create for the character. 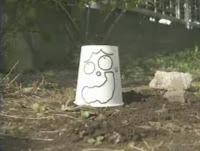 The fact that much of the settings for the animation are outdoors or indoors near a window or open door adds another set of challenges to the stop motion animator. Outdoors, the elements interfere with the continuity of the film such as the differentiation of light levels, wind blowing leaves, grass, and curtains, and so on. This is why most stop motion animators choose to do their 'outdoor' work on an indoor model where they can control the levels of light (example: Murata's My Road series). 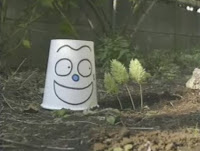 Jun Sasaki's blog has photos of the team at work outside: controlling rain by using a gardening hose to create rain and covering Kimotchi with a plastic cup to keep his face from running in the rain. In the final product, they've left in some of the 'flaws' inherent in using real locations for stop motion (changes in light, jump cuts of grass moving, etc.) but I think that it gives the film an authentic, hand-made feel that only adds to the charm of its script.