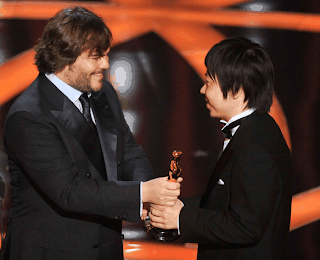 It was a big coup for Kunio Katō (加藤久仁生, b. 1977) last year when he won the Oscar for best animated short. Although La maison en petits cubes (Tsumiki no ie, 2008) had won high praise at festivals around the world including the prestigious Annecy Cristal, it is highly unlikely that Katō anticipated becoming the first Japanese animator to win an Oscar for a short film. With only a handful of nominees out of an international selection of innovative works, the competition is so tough that Katō was the first Japanese animator to ever win in this category. 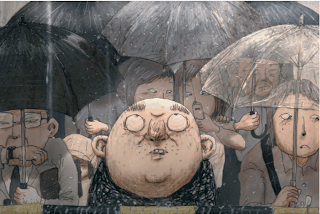 Atama Yama (Koji Yamamura, 2002)
Six years earlier, Kōji Yamamura (山村 浩二, b. 1964) came close with his remarkable film Mt. Head (Atama Yama / 頭山, 2002). Unlike Katō, who is still in the early stages of his career, Yamamura is at the peak of his career. Having spent the 1990s honing his multi-layered animation style, the past decade has seen Yamamura producing one acclaimed work after another, each of them winning animation festivals around the world. Franz Kafka’s A Country Doctor (Kafuka Inaka Isha / カフカ田舎医者, 2007) was his most brilliant work to date, but it didn’t even garner an Oscar nomination.  Technically Yamamura's films are brilliant, but his storytelling style may be too abstract and cerebral for the Academy who traditionally like crowd-pleasing fare.
I’m not sure how animated shorts have historically been eligible for nomination, but in recent years a film must first win an award at a qualifying festival to be considered by the Academy. Judging by previous nominees and winners, it is certainly a very prestigious category to find oneself in.  The Best Animated Short category was inaugurated at the 5th Academy Awards in 1932 - in contrast to the Animated Feature category which only began in 2001. In the 1930s, animated shorts were much more common that feature length films. They played before the big name Hollywood features along with newsreels and other shorts. The early years of this award are dominated by Walt Disney (who won 12 times), with Universal, MGM, and other studios occasionally slipping a nomination in. In those days, it was the production studio and not the individual artist who got the award. In the 1940s and 1950s, Warner Brothers and UPA began showing up in the nominations as often as Disney. In the 1960s, foreign films began to make their way into the nominations. Interestingly, Canada’s top animator of the century, Norman McLaren, won his first two Oscars in the Best Short Subject rather than the Animation Category – I guess pixilation was considered too avant-garde to be animation in those days (in fact, the category was called Short Subjects: Cartoons up until 1973). By the 1970s, and continuing up until the present, the category no longer represented mainstream animation but cutting edge works from around the world.

The Magic Pear Tree (Jimmy Murakami, 1968)
Before Yamamura, only two semi-Japanese projects were nominated in this category. The first was nisei Teruaki “Jimmy” Murakami (b. 1933), the Japanese-American animator from California. Murakami, who has an animated documentary about his life called Jimmy Murakami, Non Alien making the rounds at the documentary festivals this year, was interned at the age of 8 with his family during the Second World War. He is best known for his adaptations of Raymond Brigg’s books The Snowman (1982) and When the Wind Blows (1986). Murakami was nominated for his only Oscar in 1968 for The Magic Pear Tree. 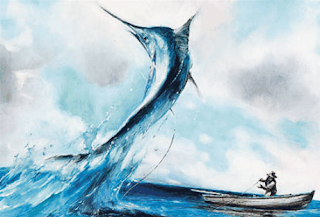 The Old Man and the Sea (Aleksandr Petrov, 1999)
A Japanese producer also had a hand in the making of Aleksandr Petrov’s The Old Man and the Sea (老人と海, 1999), which not only won an Oscar but also won the Grand Prix at festivals around the world . It is the only animated film with a non-Japanese director to win the Noburō Ōfuji Award at the Mainichi Film Concours. This international (Canada/Russia/Japan) co-production was co-produced by Tatsuo Shimamura. Shimamura (島村達雄, b. 1934) also co-produced with Kihachirō Kawamoto the animation omnibus Winter Days (Fuyu no Hi/ 冬の日, 2003). He also has an illustrious career as an animator in his own right founding his own studio (Shirogumi) in 1974.
This year’s nominees for best animated short represent France, Ireland, the UK, and Spain. In terms of animation technique, I find the selection heavy on computer animation (apart from the Wallace & Gromit short A Matter of Loaf and Death).  As my regular readers will know, I don't mind the use of computers in animation, but I prefer a good handmade film. In terms of innovations in plot and storytelling technique, the films get high points for creativity and sense of humour. La dama y la muerte (The Lady and the Reaper, Javier Recio Gracia) gives a humorous take on the battle between death and modern medical science. The prize for pure chutzpah goes to Logorama (Nicolas Schmerkin) – I am sure it is only a matter of time before some of the big corporate logos sent up in this short go after the French animators (starting with Mickey D’s). My personal favourite of the bunch is Granny O’Grimm’s Sleeping Beauty (Nicky Phelan and Darragh O’Connell) because I love feminist retellings of fairy tales.
The artists featured in this piece need your support.  Jimmy Murakami has a DVD out of his films. The Old Man and the Sea is available on DVD in Japan and in the States, Canada, & France. The following films can be purchased via cdjapan: