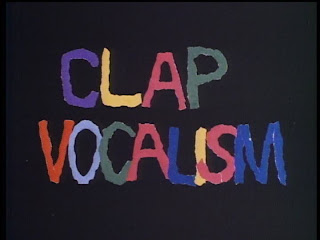 In many ways Yōji Kuri’s 1962 animated short Clap Vocalism (人間動物園/Ningen Dōbutsuen) is a partner film with his work Love (愛/Ai, 1963). Not only did both films, together with his short works The Chair and AOS and Tadanari Okamoto’s A Wonderful Medicine jointly win the Ofuji Award in 1965, but they also share similar themes, motifs, and animation styles. Kuri uses his characteristic illustration style in this film, but without the Japanese cloth/paper cutouts of Love.

). The voice actors are also the same: H. Mizushima and Kyōko Kishida (The Woman in the Dunes

). The film actually has two titles – one in English, the other in Japanese – which point to two important thematic concerns of the piece. The English title “Clap Vocalism” refers to the experimental style of composition used by Takemitsu in the piece. Instead of using classical composition or song, Takemitsu has composed a piece that uses the male and female voices in an animalistic manner - sometimes staccato, sometimes sustained as if moaning.

I have deliberately used the term “animalistic” because as the Japanese title “Ningen Dōbutsuen” – “Human Zoo” – indicates, the human characters in this film are pictured as caged animals. A series of scenes are presented of male/female couples in a cage. As in the film, Love, Clap Vocalism is another example of misogyny in the works of Kuri. The women are all larger and dominating the male figures. There is the motif of the man being held on a leash like a dog, beaten with a broom by the woman, a prone man being poked with an umbrella, a man in a bird cage being prodded by a stick, and so on. Female sexuality is depicted as being threatening to men. Illustrating this are a small man trapped between the exaggerated breasts of one large woman and a woman’s breasts suddenly growing in order to injure a man trapped by the bars of the cage.

The male figures bark like dogs or moan when abused by the female figures. The images are in complete harmony with the soundtrack in a way that suggests that there was a close collaboration between the composer and the animator. The film is significant for the way in which it presents a rather bleak male perspective on the changing roles of women and men in the politically turbulent 1960s.  The film won the Special Jury Prize at Annecy in 1963 and the bronze award for animation at the 1963 Biennale in Venice.

You can support this artist by purchasing his work here: