MOM Productions and the Making of Rudolf the Red-Nosed Reindeer 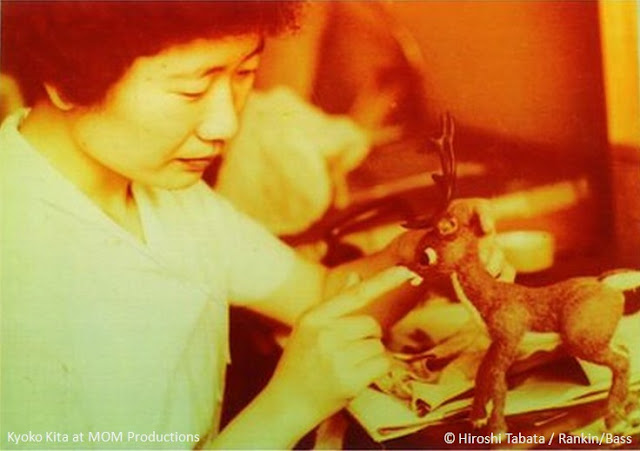 It’s the Christmas season again and my children have already watched our DVD of the 1964 stop motion animation of Rudolf the Red-Nosed Reindeer (1964) half a dozen times.  I never tire of watching this Christmas special which was something I looked forward to watching on TV every year when I was a child.  The characters have clearly been lovingly brought to life by the hand of some animator.

As I reported last year in my post Rankin/Bass Christmas Specials: Made in Japan, Rudolf and many other animated Christmas specials produced by Rankin/Bass were animated in Japan.  Rudolf is an early example of an international co-production for television.  The production, concept, and screenwriting were all done by Americans.  Apart from the star, Burl Ives, the voice acting was all done in Canada.  The stop motion “Animagic” was subcontacted to Tadahito “Tad” Mochinaga’s MOM Production studios – a place where many animators including the great Tadanari Okamoto got their start.  Rick Goldschmidt’s The Enchanted World of Rankin/Bass

tantalizingly offered up a few tidbits about MOM Productions, but I could not afford his book about the making of Rudolph.  Fortunately, he released The Making of the Rankin/Bass Holiday Classic: Rudolph the Red-Nosed Reindeer

Kindle edition this year.  It gives the answers to a lot of questions I had about the production, and provides highly detailed testimonies from former MOM Productions employees.

A few of the nuggets of information about the production:

Goldschmidt’s book is a must-read for fans of stop motion animation and Rudolf the Red-Nosed Reindeer.  Add the Kindle edition to your holiday reading:

Learn more about Rankin/Bass Productions on Goldschmidt's blog or in his book: