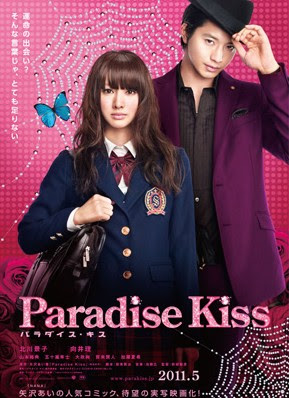 Things have been quiet here on Nishikata Film the past couple of weeks because I have been ill.  When I am under the weather and sofa-bound, I turn to what for me is the movie equivalent of chicken noodle soup: romantic melodramas.  2011 has been so jam-packed for me with work that I have not had the free time to indulge in the guilty pleasures of a cheesy romantic drama.

First on my list was the live action adaptation of Ai Yazawa’s popular manga series Paradise Kiss (パラダイス・キス, 1999-2003).  I am a huge fan of Yazawa and have been suffering from withdrawal since she abruptly stopped writing her Nana (2000 – hopefully ongoing) manga series in 2009 due to illness.  Paradise Kiss is a standalone sequel / spin off of Yazawa’s Neighbourhood Story (1995-8).  The manga tells the story of a high school student called Yukari who gets discovered by some fashion students who want her to model the designs of their studio "Paradise Kiss" at their school's end of year fashion show.  Yukari is torn between her desire to give modelling a go and pleasing her mother, who puts a lot of pressure on her to succeed academically and go on to a good university.

Like Nana, the fashion in the manga is influenced by British punk, Vivienne Westwood, and the Harajuku alternative fashion scene.  The character of George Koizumi, for example, is based on the character of Brian Slade as played by Jonathan Rhys Meyers in the film Velvet Goldmine (Todd Haynes, 1998).  In addition to the avant-guard look of the manga, the central character has a strong coming-of-age storyline.  Yukari (called Caroline by the Paradise Kiss fashionistas) does not yet know who she is as a person or what she really wants to do with her life and she is struggling not only with the intense pressure her mother puts on her, but is also having to deal with confusing feelings of sexual desire for the charismatic fashion designer George Koizumi.  The manga also has a very strong supporting cast of characters with their own subplots – Isabella, a transgender woman and childhood friend of George, and the love triangle between childhood friends Miwako (whose sister was the central character in Neighbourhood Story), Arashi, and Hiroyuki.

The live action feature film Paradise Kiss (パラダイス・キス, 2011) is adapted from the manga by Kenji Bando and directed by Takehiko Shinjo.  Shinjo is known for directing romantic TV dramas and sentimental feature films like Heavenly Forest (ただ、君を愛してる, 2006) and I Give My First Love to You (僕の初恋をキミに捧ぐ, 2009).  To put it plainly: Shinjo has basically given the story a TV-dorama makeover that guts the original story of its edginess.

To begin with, the feature film is woefully miscast.  In the manga, Yukari/Caroline is taller and more sophisticated than most girls her age and really stands out in a crowd.  While she is undoubtedly a beautiful young woman, actress Keiko Kitagawa is of average height.  Ordinarily, height would not be much of an issue except that Yukari’s height and body type are the reasons why Arashi picks her out of the crowd in the opening scene of the manga.  Kitagawa’s average height might not have stood out so much if it weren’t for the fact that Miwako, played by Aya Omasa, towers over her.  Miwako is meant to be a petite “kawaii” girly girl – so tiny in the manga and anime as to be doll-like.  Also miscast is Osamu Mukai who is much too sweet to play the charming but predatory George Koizumi. 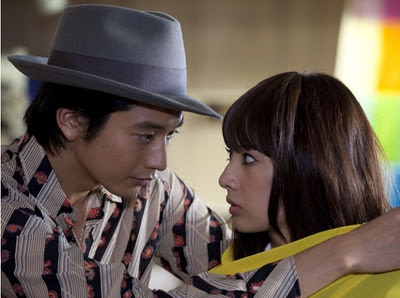 I knew I was going to be deeply disappointed right from the opening credits, which seemed more like an advertisement for nail polish than the engaging, up-tempo montage opening of the anime.  The music throughout is simpering J-pop ballads, which pale in contrast to the funky up-tempo music of the anime adaptation (IE Tomoko Kawase’s “Lonely in Gorgeous” and Franz Ferdinand’s “Do You Want To”).  I am no fashion expert, but the clothes looked more mainstream than avant-garde – instead of hiring Vivienne Westwood to design the costumes (which would have been a lovely tribute to Ai Yazawa), the clothes seemed calculatedly selected with an eye to fashion magazine and store tie-ins.

Now I know that practically speaking the limitations of time for a feature film meant that much of the subplots had to be excised.  Even the TV anime adaptation with its 12 episodes found itself scrambling to fit everything in towards the end.  However, the substantial cuts to the subplots in the feature film meant that all the supporting cast were rendered one-dimensional.  Isabella’s gender identity only gets passing references – there is no depth to her relationship with George.  Speaking of which, George’s sexuality is much less ambiguous than in the manga/anime.  Even worse, Arashi comes off as a creeper and Miwako as promiscuous.

What made Yukari special in the original manga was the fact that her story was messy and complicated.  Her friends also led messy and complicated lives.  There were no simple answers to problems and her romantic feelings towards George and Hiro-kun were confused – just as it is in real life.  By over simplifying Yukari’s story, the filmmakers have just turned it into over-polished Disneyesque schlock for teenaged girls.  I don’t mind a fluffy sentimental romance now and then, but Paradise Kiss should have been more Molly Ringwald in Pretty in Pink (John Hughes, 1986) and less Sandra Dee circa late 1950s.  This "happy ending" version of Paradise Kiss may have been enough to please the target audience of the film (IE adolescent girls), but to fans of the original manga it is simply lacking. Posted by Cathy Munroe Hotes at 5:39 am