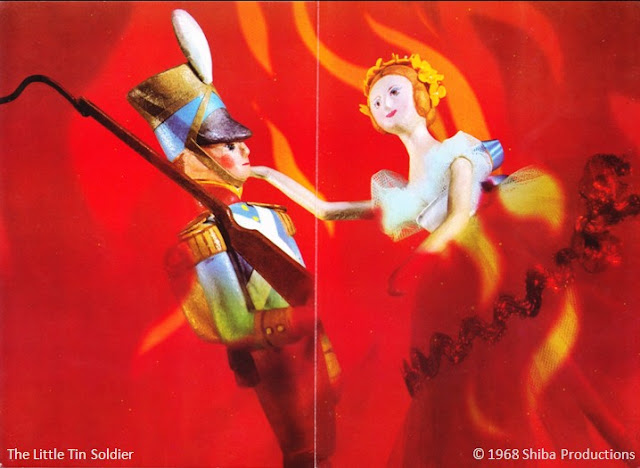 I have recently begun collecting the 3D “Living Storybooks” designed and manufactured by Shiba Productions in the 1960s.  They were distributed in North America by the New York-based publisher Golden Press.  Shiba Productions was a puppet animation studio that was founded in 1958 by three men: writer/editor Tadasu Iizawa (飯沢 匡, 1909-1994), artist/designer Shigeru Hijikata (土方 重巳, 1915-1986), and puppet maker and animator Kihachirō Kawamoto.  Kawamoto would go on to become the most famous of the three men but at the time he was an artisan and not yet a director/artist in his own right.  The studio specialized in puppet animation for television commercials.  In addition to animation, Shiba Productions also created puppets for picture books, magazines, and print advertising.

Kawamoto had first worked for Iizawa during the Tōhō strikes of the 1940s.  He was hired as an assistant art director by Tōhō in 1946.  His mentor was the acclaimed art director and production designer Takashi Matsuyama (松山崇, 1908-1977).  After getting the opportunity to work on three major feature films, Kawamoto found himself on strike with his colleagues.  During the strike, Matsuyama got Kawamoto some work at Asahi Graph, a weekly pictorial magazine run by Asahi Shinbun that ran from 1923-2000.  When Kawamoto was eventually dismissed from Tōhō in 1950, he seems to have worked together with Iizawa and Hijikata on a number of commercial projects.  Iizawa was the one who introduced Kawamoto to the stop motion animation pioneer Tadahito Mochinaga (持永只仁, 1919-1993) when he returned to Japan from China in 1953.  It was from Mochinaga and his wife that Kawamoto learned the basics of puppet animation.

At Shiba Productions, it would seem that Iizawa played a kind of producer/writer role and Hijikata was the designer of the characters.  Kawamoto crafted the puppets by hand and was in charge of the animation – or in the case of the “Living Storybooks” photo shoots of the puppets.  He drew quite heavily on what he had observed as an assistant art director at Tōhō for this.  In an interview with Jasper Sharp in 2004, Kawamoto explained that he considered the dolls that he used in the storybooks “puppets” because to him “they were actors within the books.” 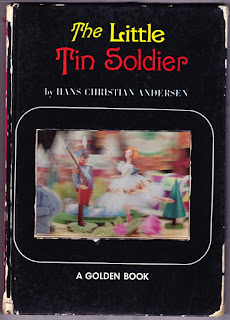 The first “Living Storybook” in my collection is The Little Tin Soldier (aka The Steadfast Tin Soldier)  by Hans Christian Andersen.  As these books were very popular with children, it is rare to find one in mint condition.  My copy (see image above) has well worn edges but the binding itself is intact.

The books were called “3D” or “Living Storybooks” not only because they feature photographs of three-dimensional puppets and sets, but also because the front cover features a full colour hologram.  This novelty cover meant that the books were quite eye-catching when displayed on the shelves of bookstores and libraries.  It also made the storybooks quite memorable for children who grew up with them.

The Little Tin Soldier has thick card pages and features 18 full colour pages and 14 black and white pages with text.  The monochromatic images of the puppets are less satisfying than the full colour pages because the images have been rather awkwardly cut out in order to have them alternate with the text.  The best monochromatic pages are the ones that have used illustrations to give the tin soldier floating down the river in his paper boat a setting.
The story is faithful to the original version of Andersen’s Steadfast Tin Soldier (Den standhaftige tinsoldat/しっかり者のスズの兵隊, c. 1838), so it does not have a happy ending.  .  .  at least not in the way most parents today would expect.  I rather like how the story ends with a random act by a child.  It seems a much more likely scenario for a tin soldier than a happily ever after ending.

The puppets and sets are all consummately designed and crafted.  The most striking image by far is that of the tin soldier and ballet dancer in the blazing fire.  Although there are certain design elements that make the book recognizable as being a product of the 1960s (ie. the title font, choice of colours, the modern looking castle and toy elephant), on the whole most of the puppets and sets have been designed in a way that references 19th century European toys and design.  It is a beautiful, highly collectable book.

Posted by Cathy Munroe Hotes at 1:29 am