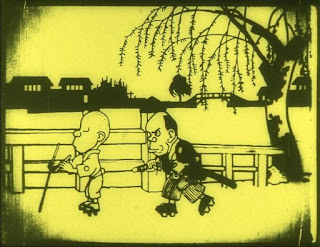 The National Film Center in Tokyo has digitally restored the oldest extant animation film in Japan and will be screening the film this spring as a part of a celebration of newly found or restored films in their collection.

Namakura Gatana: Hanawa Hekonai Meitou no Maki was made in 1917 by Junichi Kouuchi. By many it is considered to be the second animation film made in Japan after Oten Shimokawa's Imokawa Mukuzo Genkanban no Maki which was also made in 1917, but there is some debate about what film can claim the title of 'first made in Japan'. There is some evidence animation was made privately before 1917, but these were the first animation films made for public screenings.

Namakura Gatana (The Dull Sword) is a comedy with a running time of about 2 minutes. The main protagonist is a samurai who sets out to try out his new sword. There is a comical about-face which leads to the would-be victim having his revenge on the samurai. The film was quite popular with the audiences of the day.

Even more dramatic than the film's plot is the story of the film itself. Namakura Gatana and another antique animation Urashima Taro (Seitaro Kitayama, 1918) were discovered and purchased by film historican Natsuki Matsumoto at an antique fair in Osaka in July 2007. The films were in remarkably good condition because they had been stored in paper containers that allowed enough ventilation so that the films did not deteriorate.

To put this remarkable story into perspective, Japan had a flourishing film industry during the silent and pre-war periods. Donald Richie has estimated that more than 90% of Japan's pre-war films have been lost forever. The reasons for this include fires (especially the one that levelled Tokyo following the great Kanto quake of 1923), war (the fire-bombing of major cities and the American's torching 'banned' films during the Occupation), and neglect by the industry itself. Many early films were made of nitrate, which is highly combustible, and led to many films going up in flames. There was also the problem that film was seen by many as a novelty and studios did not see any profit in preserving these films for future generations.

I do hope that the Cinema: Lost and Found event that the National Film Center is holding will tour other countries and be made into a DVD for the benefit of film historians and enthusiast around the world. I find it so exciting that almost a hundred years after these films have been made, that they are still being found!