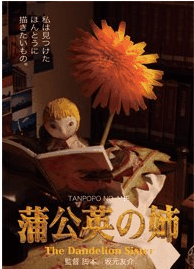 Last night at Nippon Connection I watched the Open Art Animation shorts from Open Art TV. Here’s a run down of what they showed. I will definitely do follow-up pieces on a couple of these films that were real stand-outs, like Sakamoto’s The Dandelion Sister (蒲公英の姉). The films were all presented via projected DVD.

A surreal vision in which talk, thin human figures hunt oversized fish that swim through the desert. This was the first time that I have seen a CGI film in which they were able to give the effect of a hand-held camera in certain scenes.

This piece begins with the slow view from the elevator of a skyscraper of a Canadian urban scene. The view contains no hint of the natural world. The only clues to its location are a Canadian flag flying on top of the first building we see, and a Scotia bank symbol on a skyscraper. From the smogginess, I would guess this film was shot in Toronto, but it didn’t contain any famous features of the city (ie no SkyDome, harbour, or Queen Street views). It did not look like it had been shot from the CNTower, but perhaps from a building in the business district. After a couple of vertical trips up and down, the shot then moves horizontally, and soon the filmmaker begins to break up the image into different sections and plays with perspective and geometric patterns in interesting way. My only criticism of this film was that the insistent ‘thump thump thump’ of the soundtrack is quite monotonous and by the end of the film was detracting from my enjoyment of the film. I am guessing that Hirata chose such a soundtrack to create a sense of unease, instead of choosing music that might romanticize the beauty of the ‘slide show’ he was creating on the screen.

This film won me over from beginning with its hilarious representation of one of these girls that hand out Kleenex outside major train stations in big cities in Japan. For those of you who are unfamiliar with this (I think much of the audience didn’t get it because I was the only one laughing), in Japan they found that people are reluctant to take flyers that are handed to them on the street. So, advertisers decided to put the ads onto something useful - a small bag of portable tissues – because they found that the public was more likely to take something useful for them. In the flu and allergy seasons (cedar pollen!!!) in Japan, it really is quite a handy thing.

The girl in this film has her hair covering her face and is standing in the countryside instead of an urban setting. Business men and cars still come by, and are dealt with by her in surreal and absurd ways. I haven’t worked out the meaning of the food flying around after she trips a car with a futon (I told you it was surreal) but it is a visual delight and I always enjoy it when art films have a sense of humour.

This film plays with digital images and seems to be making a statement about globalization.

I was quite impressed by this surreal cel animation. The way in which figures morph into one another and the soundtrack reminds me of some of the work done by Koji Yamamura and Tomoyasu Murata. This animator shows a lot of promise and I will be keeping an eye out for his future work.

This looked like it may have been done using Flash animation. It’s a kind of a fable about the relationship between a man made of cloud and a man made of rain. A beautiful and humorous flight of fancy.

A very clever film that at first just seems like a graphic playing with i images taken from a wide variety of currencies, but soon transforms itself into a political statement on the relationship between money and political power, war, and imperialism.

This claymation film was a delightful discovery. It tells the tale of the difficult relationship between two sisters. The younger sister struggles with her feelings for her older sister, a talented artist who is ill. By adding the surreal touch of the ailing older sister being a dandelion, Sakamoto is able to lesson the sentimentality of the story and transform it into an artistic rendering of the younger sister’s journey through sorrow that ends in her discovering herself as an artist herself. A real gem of a film.

An amusing exploration of what it means to be an artist and a human being. The witty voice-over narration leads us through the main protagonists transformation into a maggot who has retained his human consciousness from his former life. Beautifully shot and cleverly written, this film was a pleasure to watch from start to finish.