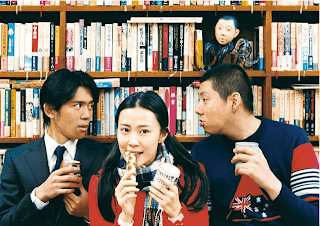 The funniest film at Nippon Connection this year was unquestionably Yosuke Fujita’s Fine, Totally Fine (Zenzen Daijobu, 2007). The film put such a delightful spell on its spectators that the film managed to beat out some pretty stiff competition from competing films to win the top prize at the festival.

Unlike most comedies, which immerse audiences in a storyline and move from plot point to plot point, Fine, Totally Fine works its magic through character development. We are introduced to a set of quirky characters who delight with their unusual hobbies and personality quirks. Taking centre stage is Teruo Tōyama, played with comic finesse by the irrepressible Yoshiyoshi Arakawa. Teruo loves scaring his friends and complete strangers with horror gags. By day he works in parks management and in his spare time he creates elaborate horror models and gags. He also helps his father, who is experiencing a mid-life crisis, run the family second-hand bookstore.

The bookstore becomes the focal point for the eclectic cast of characters who wander in and out of the narrative. Conflict eventually arises when Teruo’s best friend Hisanobu Komori (Yoshinori Okada), a medical center manager with a soft heart, and Teruo both fall for the shy, horrifically accident-prone artist Akari Kinoshita (Yoshino Kimura). Each of the characters has a personal issue that they need to work through. Teruo dreams of creating the most spectacular haunted house in the world so that he can prove to his friends and family that his hobby is not childish. Komori finds that his staff are trying to match-make for him and needs to overcome his shyness to find the romantic relationship he desires to have. Akari also needs to overcome her shyness and connect with people instead of only connecting with the world around her through her art.

The film completely fascinated me in the way it kept me fully engaged through comic gags and character development. Yosuke Fujita, who both wrote and directed Fine, Totally Fine, has worked in theatre comedy for many years working with the Otona Keikaku comedy troupe. The impeccable timing of the 2-part gag set up was reminded me of the films of the three greats of the silent era: Charlie Chaplin, Buster Keaton, and Harold Lloyd. The first gag would start you laughing, then Fujita would hit you with a second, even funnier gag that would escalate the audience laughter even further. Like Chaplin, Fujita also adds sentimentality and romance through crushes that Komori and Teruo develop on the beautiful Akari. The bittersweet ending also has a Chaplinesque charm about it.

Other things to like about the film include the endearing performances of the supporting cast. Fujita’s script allows each character to shine long enough to make a solid impression on the audience. The horror dolls designed by expert movie model-maker Hiroshi Sagae are priceless. Examples of Sagae’s horror dolls done in Arakawa’s likeness can be seen at ryuganji.net. You can also see them pop-up on the official homepage for the movie, where you can also listen to a sample the relaxing soundtrack music.

Although this film hasn’t even made it onto the Internet Movie Database yet, perhaps because it is the feature film debut of Fujita, I have a feeling that it will make it onto the international art house circuit. Fine, Totally Fine is a real comic gem.