I was delighted to have the opportunity to chat with artist, manga-ka, and animator Akino Kondoh at Shinsedai this year. Her 2004 painting Red Fishes was used as the eye-catching poster art for the festival, and her 2006 animation Ladybirds’ Requiem (Tentou Mushi no Otomurai, 2006) preceded Momoko Ando’s Kakera (2009) at the opening event.
Childhood influences
Kondoh was born into an artistic family. Her father and brother are both architects and her homemaker mother studied design at university. Kondoh was never particularly interested in television. Instead, she recalls enjoying having picture books read to her by her parents and being taken to museums. Kondoh also had little interest in popular manga as a child.  She did; however, discover Garo (ガロ, a monthly anthology magazine for avant-garde manga which ran from 1964-2002) when she was a junior high school student. Kondoh’s own manga art has been featured in alternative manga magazines and one of her striking images adorns the cover of the debut English language edition of AX: A Collection of Alternative Manga 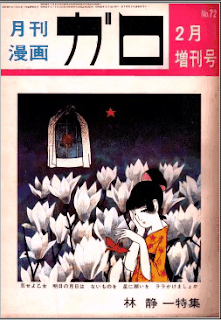 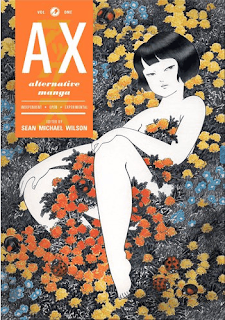 Insects
I have long been interested in the prevalence of insects in Japanese art and culture. Cicadas, for example, are always used as signifiers in movies to indicate that the setting is late summer. When my children were in hoikuen (nursery school) in Bunkyo-ku, they had a pet kabuto-mushi (Japanese rhinoceros beetle) in the same way that a Canadian Kindergarten might have a hamster. In Kondoh’s art insects like ladybirds (ladybugs in Canadian vernacular), butterflies, and insect larvae play an essential role. When I asked Kondoh about this she told me that insects have long been an object of fascination for her. She recalls playing with insects as a child, so it has been only natural that they have become a source of artistic inspiration in her work.

Introduction to art animation
While a student of graphic design at Tama Art University, Kondoh was introduced to animation in her second year of studies through assignment work. Her professor was Masashiro Katayama (b. 1955), who has enjoyed a long and successful career as an animator and illustrator (see my review of Winter Days, and Kawamoto’s Self Portrait). In her third year at Tamabi, Kondoh made The Evening Traveling (Densha kamoshiranai, 2002), her first animation short. The Evening Traveling won her awards at the Japan Media Arts Festival (2002), the Digista Awards (2002), and the third Yuri Norstein Grand Prix / Audience Award at Laputa Animation Festival.
The use of music in her animation
Kondoh and her brother became big fans of the band TAMA when they were teenagers. Through a fortunate series of events, Kondoh was able to develop a professional relationship with band member Toshiaku Chiku. Prof. Katayama often invited animator Tatautoshi Nomura of ROBOT (the company that employs Oscar-winner Kunio Kato) to guest lecture his class. Nomura is also a fan of TAMA and has often worked with the band for the soundtracks to his animations both as musicians and as seiyū (voice actors). Kondoh was able to get permission from Toshiaku Chiku to use his song Densha kamo shirenai for her film of the same name. (English title The Evening Traveling)  At first, Kondoh explained, Chiku was not really sure about her project, but when the film was a success and won awards at festivals, he agreed to compose an original score for Ladybirds’ Requiem. 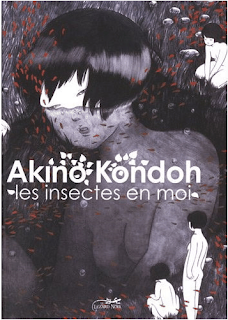 French edition of her manga
Elaborate vision, minimalist style
Akino Kondoh’s art carries us into a complex, dream-like world. Yet while the images she creates are highly detailed, at the same time she employs a very minimalist aesthetic. When creating the images for her animation films, she uses plain art paper. Her tools are graphite and marker. Her colour palette is predominantly black against a white background – as in The Evening Traveling which was entirely monochrome. Filler colours like grey or the brilliant reds of Ladybirds’ Requiem are done with markers. The images are then scanned and edited using Adobe Photoshop and After Effects for Macs.
Prolific artist with an eye for detail
Kondoh’s passion for her craft drives her to put in long hours at the canvas. While some artists prefer to work in the morning hours, or well into the night, Kondoh’s entire day revolves around her desire to keep on creating new work. At the same time, Kondoh is a perfectionist with very high standards. There are actually two versions of Ladybirds’ Requiem. The one that is floating around on various video streaming sites was done as a student work in 2003 and has a running time of 2’50”. Kondoh expressed a deep dissatisfaction with this work and so in 2005 she set out to remake the film. She started from scratch, drawing entirely new images for the animation which was eventually completed in 2006 with a running time of 5’38”. A limited edition DVD of the film (only 12 copies!) was released for sale to her representatives Mizuma Art Gallery and snapped up by high end art connoisseurs. It is this version of the film that played at Shinsedai and at Naomi Hocura’s Seconds Under the Sun screenings.
Kondoh’s fascination with contemporary art
Funding from Bunka-cho (the Agency for Cultural Affairs) allowed Kondoh to do a residency in New York City from November 2008 until October 2009. For that first year in New York she lived in Chelsea. She has now moved to Astoria and is supporting herself through her art. When I asked her “Why New York?”, she responded that she wanted to immerse herself in contemporary art and get exposure to the art community outside of Japan.
Kondoh’s depiction of Eiko, the young woman protagonist at the center of her work, has often reminded me of art deco influenced illustrations that I saw at the Yayoi Museum when I lived in Nishikata. I was also reminded of the unusual world of girls I had once seen at the Collection de l’art brut many years ago in Lausanne, Switzerland. When I described the work to Kondoh, she immediately put a name to the artist – Henry Darger. It turns out that Kondoh shares my interest in l’art brut or Outsider Art and she spoke enthusiastically about the Henry Darger collection at the American Folk Art Museum in New York, which is located near the MOMA.

Future Plans
I was impressed by Kondoh’s high ambitions and passion for her work. She dreams of showing her work all over the world. Among other projects she has currently on the go are collaborations with the New York avant-garde jazz musician John Zorn, for whom she designed the cover art for his CD The Goddess: Music for the Ancient of Days

. She does plan to do more animation in the future, and is working constantly on her art. She expressed her enthusiasm by saying: “I want to keep creating”