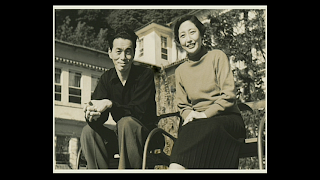 Shunji Iwai’s 2006 documentary The Kon Ichikawa Story (Ichikawa Kon Monogatari) arrived in the post yesterday afternoon. As connoisseurs of Japanese film will know, Japanese DVDs are usually very overpriced compared to prices in other countries. The price for this 2 disc box set is well worth it for the beautifully designed packaging and glorious black and white photographs of the director and his screenwriter wife Natto Wada (和田 夏十, 1920-1983).
The documentary was its flaws (more on that another time), but from it I have gleaned a few more things about Natto Wada than I knew when I wrote 10 Things I Know About Natto Wada: 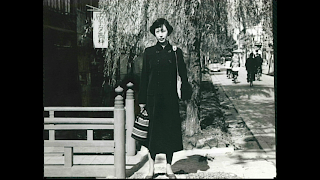 1. When Ichikawa met his wife, she was working as an interpreter at Toho.


2.  When Ichikawa fell in love with Wada, he decided he would marry her after he became a full-fledged director. She chose the novel for him to use for his first screenplay: Machiko by Yaeko Nogami. This novel became his first feature film A Flower Blooms (Hana Hiraku, 1948) 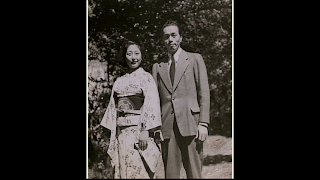 3.  On April 10, 1948, Ichikawa and Wada married quietly in a local shrine and invited a few close friends from Toho to celebrate with them.


4.  The name Natto Wada initially was their pen name as co-writers, but it soon became her name. In private, she called him “Danna” (often translated at “master”, it is a traditional way for a wife to refer to her husband)  and he called her “Natto-san”.
5.  Ichikawa and Wada could have intense creative arguments with each other that could lead to them eating dinner together in silence. But, Ichikawa admitted that when they argued he would always end up being the first to give in because he had to admit that her ideas were always right. 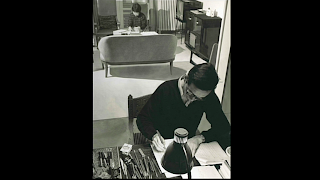 Ichikawa in the foreground at his desk.
Wada in the background working at the coffee table.
6.  Wada had never set out to be a screenwriter. She wanted to be a good wife and saw her writing work as an extension of her support for her husband. In a very Jane Austen kind of way, she didn’t have her own study but would write in communal family spaces like the dining table, the coffee table, or in the kitchen. 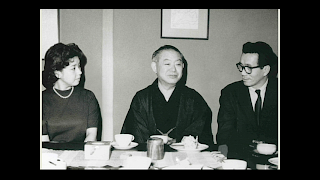 Tanizaki (center) and Ichikawa (right)
7.  In order to acquire the rights from Junichiro Tanizaki for his 1956 novel The Key

(Kagi), Wada told Ichikawa that he should prepare a wad of cash and drive a Mercedes to visit the great writer. Apparently, she was right about the cash and the Mercedes because Ichikawa did get the rights to make the film Odd Obsession

, Wada told Ichikawa that it was time for him to do it by himself. After her retirement, she showed no interest in screenplays any longer and Ichikawa was left to his own devices.  However, before he passed away, Ichikawa told Shunji Iwai that he still had screenplays by Wada that he had not yet had a chance to film.
8.  While Ichikawa was away working on films, Wada rarely called to interrupt his work. One exception was when she was diagnosed with breast cancer. She called him in Osaka where he was editing a television drama.
9.  Shortly before she died, Ichikawa convinced Wada to write the ending to his Makioka Sisters

screenplay. She died before the film was released.

(1982) at a theatre in Ginza.  She and Ichikawa agreed was Steven Spielberg’s best film to date. Ichikawa recalls her saying: “I’m glad I saw such a good movie in the end.”  She died in the New Year.