Lost in Translation: Traditional Chef Master?  It's a Mom & Pop ramen shop!
An amusing discussion took place on Facebook this week about whether or not The Ramen Girl

(Robert Alan Ackerman, 2008) was a “surprisingly good film” or the exact opposite. As I did’t feel comfortable totally discrediting a film for which I had only seen the trailer, I decided to watch it  I had great hopes that it would be so bad that it was funny à la Rock Hudson and Doris Day in Pillow Talk

(Michael Gordon, 1959). Sadly, it was not meant to be. The film is only mediocre, despite the best efforts of the Japanese cast to breathe some life into it.

Confusing marketing.  Is this film about ramen or sex?

My short review of the film would be: “typical in-flight movie fare”, but for the edification of aspiring film directors and producers out there, here are some of my suggestions on what would have made this a much better film:
If you want a great feature film, don’t hire an American TV director. I confess that while I am unfamiliar with the work of Robert Alan Ackerman, in my judgment it is very rare for a longstanding American TV director to make the crossover successfully into cinematic fare. They pick up too many small screen habits (too much dialogue, not enough visual WOW factor).

Charlie & Gretchen “Cheers! Welcome to Japan”
Cast the English-speaking supporting cast with cinema actors (instead of theatre& TV actors). Watching the over-the-top performances of the English Toff (straight out a Merchant Ivory production

circa 1985) and the faux Southern Belle Hostess did not make me laugh. Rather it drudged up long repressed memories of creepy eikaiwa teachers hitting on their unsuspecting students. Shudder. Did producer / casting director Yōko Narahashi (Babel

)? Or was Welsh theatre actor and director Daniel Evans told to ham it up like Naoto Takenaka as Stresemann in Nodame Canabile? Which brings me to the most likely source of the comedy gone wrong: the direction. As it is doubtful that the direction was “lost in translation” between the English speaking director and his English speaking cast, we must thank whoever translated the direction to the Japanese cast for bringing a few moments of sunshine to an otherwise dull script.

Don't let Kimiko Yo languish in the background!!!
Give Kimiko Yo more screen time and dialogue. She’s amazing in every movie (Dear Doctor, Departures

If the film’s about Japanese food hire Nami Iijima as your food stylist. Her work on Naoko Ogigami’s films Megane (my review) and Kamome Shōkudo (my review) is beyond reproach. Ditto Chef of the South Pole (my review), which featured handmade ramen as a key plot point. I learned so much about the making of ramen while watching Makoto Sakai do it in Chef of the South Pole that I was shocked that The Ramen Girl seemed only to be about broth and toppings and not about the noodles themselves. If you want us to believe that your characters are having a Like Water For Chocolate

(Como agua para chocolate, Alfonso Arau, 1992) moment, the film must be a feast for the eyes as well:

Ramen done Nami Iijima style (Chef of the South Pole, 2009)
- compare the expression of delight on the actor's face:

To the suffering endured by the actors in The Ramen Girl:

Oh, the agony! If only the director were Alfonso Arau!

"I feel Brittany Murphy's sorrow at the direction this plot is taking!"
cries the lady with the pink scrunchie in her hair
Improve the on-screen rapport between the lead actress and her sensei. Toshiyuki Nishida (Sukiyaki Western Django

, The Uchoten Hotel) nailed his performance in this film, but there was clearly a lack of connection between him and Brittany Murphy. Not only did they never have a proper discussion in Japanese, which seemed very rude of “Abby”, but when Brittany Murphy's blank stares during scenes when they were supposed to be connecting emotionally where bordering on disturbing. It should have looked more like this behind the scenes photograph: 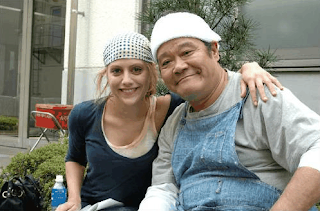 Why can't you whine in Japanese?
You've been working in my shop for a year now!

And finally: Tie the romantic plot line into the ramen plotline. The film would have been much more satisfying romantically speaking if she fell in love with the estranged son of the ramen shop couple instead of some random guy with no connection to ramen that she meets while out clubbing with her dodgy gaikokujin friends. No offense to Sohee Park (Tokyo!), the Zainichi actor who plays the love interest. He did an able job in English.

On a positive note, I can see the average Japanese audience reacting well to this movie - mainly because the Japanese acting is strong and the English acting may be lost in translation. Other good news:- the DVD is quite cheap in Japan: