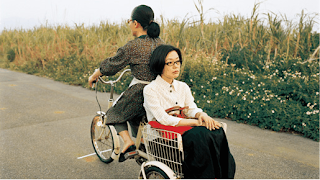 An island community like no other Taeko has ever experienced.
The Frühstücksfilm (Breakfast Film) is a popular annual event at Nippon Connection. The screening takes place on the final morning of the festival . In addition to the screening of a film sponsored by the Japan Foundation of Cologne (Japanischen Kulturinstitut Köln), guests are treated to an elegant buffet brunch. Past years have featured such popular films as Shinobu Yaguchi’s Swing Girls

(2002) in 2009.
This year’s film choice, Naoko Ogigami’s Megane (Glasses, 2007), was also very popular and the event sold out before the festival had even started on Wednesday the 14th. Guests began queuing at least a half hour before the film and I spoke to at least a dozen people who had loved Ogigami’s surprise hit Kamome shokudō (Seagull Diner, 2005) and wanted to see more of her work . Kamome shokudō, which I wrote about when it came out on DVD in Japan, was a word-of-mouth sensation. It had been recommended to me by the staff at the Moomin Bakery & Café in Korakuen – who clearly identified with the idea of Japanese women running a café in Finland. The Japanese women I met outside the Frühstücksfilm didn’t care about getting any breakfast, they just wanted to see Ogigami’s latest film.

The culinary skills of Nami Iijima.
I was lucky enough to be offered a bench seat out of the way of the paying customers, and the experience did not disappoint. I had been concerned that the sound of people eating might distract from my enjoyment of the film, as Ogigami’s films tend to keep dialogue at a minimum. Fortunately, the comforting sound of the 16mm projector, which was in the room with us, muffled the clinking sounds of cutlery and clatter of tea cups hitting their saucers. Many guests have been coming to this event for years, and most wait patiently for the brief intermission for the changing of the reels to help themselves to seconds at the buffet.
Megane tells the story of a career woman Taeko (Satomi Kobayashi) who has travelled to a remote island community to get away from the stresses of her life. It is a classic fish-out-of-water tale that contrasts the holiday expectations of someone used to an urban lifestyle with the slower paced lifestyle of people living on the island. Instead of finding peace and tranquility at the Hanada inn, Taeko is puzzled by their seemingly (in her eyes at any rate) eccentric lifestyle.

Taeko: "Could you advise me on the best places for sightseeing?"
Sakura & Yuji are puzzled by her request.
On her first morning at the inn, Taeko is awoken at the crack of dawn by Sakura-san (Masako Motai) kneeling next to her futon announcing Ohayo gozaimasu (Good morning) and inviting her to join their Merci taisō (thank you exercises) on the beach. Taeko declines, but every morning she is awoken by the piano music that accompany these beach excises which are like a cross between the popular NHK radio taisō and some of Sakura-san’s own special exercises designed to greet the morning “Dämmerung” (sunrise).

A touch of Ozu in the cinematography.

The German term “Dämmerung” (dawn/dusk) seems more fitting that the term “twilighting”, which from reading other reviews of this film seems to be the English version’s translation of the Japanese tasogare (黄昏). I have I think that the old Scottish word "gloaming" may be more adequate – though a bit archaic apart from in the campfire song: “Fire's burning, fire's burning, Draw nearer, draw nearer , In the gloaming, in the gloaming, Come sing and be merry.”
The reasons why Taeko has run away from her urban life to this anonymous island are deliberately kept unclear so that the spectator can imagine themselves in her shoes. It is the story of a woman’s journey to find inner peace. Taeko must learn to let go of the structures that have contained her life for so long and learn how to appreciate the simple pleasures in life: eating kakigōri (shaved ice flavoured with syrup) on the beach and greeting the dawn of the new day with open arms.

). Not to mention the lyrical score by Takahiro Kaneko. 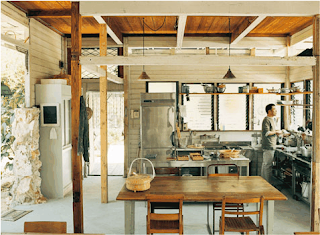 Interiors straight out of a catalogue.
Encapsulating the themes of the film is a German poem that Taeko’s student, Yomogi, who follows her to the island, recites at about three-quarters of the way into the film. Japanese reviews of the film seem to be as stumped as I am as to who the poet is. I have asked a number of well-read Germans who are also puzzled as to its origins (possibly Peter Härtling?). I transcribe the poem here in German as well as in English in the hopes that someone recognizes it and posts a comment:
Mir ist bewusst was Freiheit bedeutet
Folge dem Wege geradeaus,
meide die Tiefen des Meeres,
doch hab ich solch Wort hinter mir gelassen.
Der Mond scheinet auf jedem Wege,
wie die in der Dunkelheit wie Diamanten schwimmenden Fische;
heiß wie durch Zufall Mensch - und hier bin ich.
Was hatte ich zu befürchten,
mit was zu kämpfen,
bald ist es Zeit die Lasten zu legen.
Erteile mir noch mehr Kraft,
Kraft zur Liebe.
Mir ist bewusst was Freiheit bedeutet,
mir ist bewusst was Freiheit bedeutet.
I know what Freedom is.
Follow the path straight ahead.
Keep out of the ocean deeps
I have left such words behind me
The Moon shines upon all paths
like Fish who swim like Diamonds in the Dark
Called a human being by chance – so here I am
What did I have to fear?
Against what was I struggling?
It’s time for me to lay down my heavy load.
Give me even more strength,
Strength to love.
I know what Freedom is.
I know what Freedom is.
An aside:
In Mark Schilling’s review of Megane, he wondered if such places as Hamada’s beachside inn actually exist in Japan and suggested that the film was designed to appeal to the romantic imaginations of urban women. Having travelled extensively in Hokkaido, I can attest to the authenticity of the setting (though the film was shot on the opposite end of Japan on Yoron Island in Okinawa – which unlike in the movie does have fancy resort style hotels).

While watching Megane, I was reminded of the youth hostel on the remote northern island of Rishiri which wakes its guests with music at 7am and expects everyone to leave the premises immediately after breakfast. Taeko’s refusal to eat meals with the folks running the establishment would be seen as very rude. A Hokkaido minshuku/B&B/pension like Ashita no Jo (あしたの城 - famous for their gyunyu-nabe) in Sarobetsu or Moomin Mura (ムーミン村) in Hidaka is often like one is like staying as a guest with a family. One arrives before six in the evening and eats together with the hosts and other guests. Guests then get a chance to use the ofuro (お風呂 / Japanese style bath) in the order in which they came. One breakfasts early with the family and even if one is staying for several nights, the guest would be expected to make oneself scarce until evening. It is a great way to get to know people when travelling in rural parts of Japan, from adventurous cyclists to people making Buddhist pilgrimages. If one plans on going hiking in the morning, the hosts will usually make up some onigiri for guests to take with them for lunch.

Megane does a wonderful job of depicting a remote community peopled not only by locals but by refugees of urban society.  The contrast between what one imagines the countryside or seaside to be like, as opposed to what it actually is has become a theme of many films recently from Dear Doctor to One Million Yen Girl.   Filmmakers seem to be tapping into the growing slow life (スローライフ) movement in Japan: a desire to escape the pressures of city life for a slower pace.  For anyone in need of a visual change of pace, Megane is the perfect antidote to the trite 3D fare Hollywood's been throwing at us of late (see: Roger Ebert: Why I Hate 3D (and you should too)).
Director / Screenplay
Naoko Ogigami
Cinematographer
Minebobu Tani
Music
Takahiro Kaneko
Food Stylist
Nami Iijima
Cast
Taeko • Satomi Kobayashi
Haruna • Mikako Ichikawa
Yomogi • Ryo Kase
Yuji • Ken Mitsuishi
Taeko’s friend • Hiroko Yakushimaru
Koji (the dog) • Ken