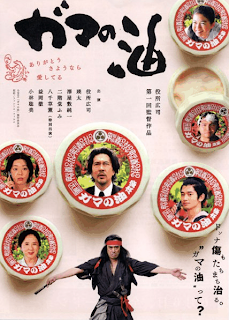 When visiting friends of ours in Hamanaka (Hokkaidō) many years ago, I was fascinated by obāchan’s morning and evening ritual of praying at the butsudan (仏壇) in the corner of the family’s Japanese style room. A butsudan is a Buddhist shrine found in both temples and homes and is used for praying to Buddha and to one’s deceased family members. The butsudan is often decorated with photographs of the deceased and their souls (tamashii) are belived to reside in the butsudan. Each morning obāchan would offer fresh water and rice to Buddha and the souls of the dead.
Renowned actor Kōji Yakusho (Shall We Dance

, Warm Water Under a Red Bridge

) also admits to a fascination with the butsudan, and thus chose it as a key metaphor in his directorial debut Toad’s Oil (Gama no abura, 2009). Yakusho himself plays the lead role of Takuro Yazawa, a wealthy middle-aged man who makes his money by high risk day trading. When his gambles bring him profit, Takuro celebrates in a juvenile way by shooting off pellet guns. His egocentric eccentricities are indulged by his wife Teruko (Satomi Kaboyashi of Kamome Shokudō and Megane) and his sweet-tempered son (Eita of Dear Doctor and Nodame Cantabile

).
The Yazawas live in an oversized house with clinically white interiors. The emptiness of the house stands as a metaphor for the shallowness of the family’s existence. Takuro communicates with the outside world through technology (computers, phones) and codes, such as the one he invents with his son’s girlfriend Hikari (Fumi Nikaidō in her feature film debut), and has little to no physical or spiritual contact with others. This all changes abruptly when tragedy strikes the family and Takuro heads off on a journey that will bring him back into touch with painful and nostalgic memories from his childhood while teaching him to face head on the grief and emotional challenges of the present.
The screenplay contains many touches added from Yakusho’s own personal experiences. For example, the flashback scene in which a young Takuro climbs up to the top of the butsudan to clean it on the advice of a travelling salesman, was inspired by a real incident in Yakusho’s life. Such travelling salespeople were commonplace in the Edo period selling folk medicine such as gama no abura (oil from the Japanese common toad) and a few continue working up until this day. The salesman and his wife act as a link between modern Japan and a past filled with tradition and legend. The salespeople are not just selling folk medicine but folk wisdom as well. The salesman reminds Takuro that people die twice: the first time is the physical death and the second one is the spiritual death when people stop remembering you.
At times I found Toad’s Oil a bit indulgent in terms of pacing – in my opinion, Soichi Ueno (Oh, My Buddha!, Dai Nihonjin, The Uchōten Hotel) should have convinced Yakusho to shave off some of the scenes to get the film under two hours in length – yet viewers should remain patient because the film does not give up all its secrets until the very end. Like the Oscar-winning film Departures

, Toad’s Oil, opens a fascinating window into the relationship that the Japanese have with death and dying. While the film is thematically and visually rooted in Japanese culture, it has a message that can be universally identified with: that the spirits of loved ones who have passed away will continue to exist as long as we remember and cherish them.