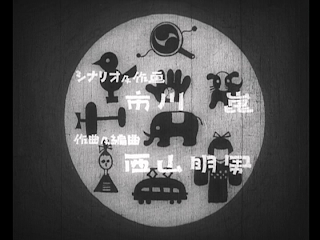 Kon Ichikawa (市川崑, 1915-2008) is most famous for his feature film output including such masterpieces as The Burmese Harp (ビルマの竪琴, 1956), Fires on the Plain (野火, 1959) Alone on the Pacific (太平洋ひとりぼっち, 1963), and the documentary Tokyo Olympiad (東京オリンピック, 1965).  In his youth, Ichikawa adored the animation of Walt Disney. The Silly Symphonies inspired him to join the talkie animation department at J.O. Studios in Kyoto in 1933. He began as an assistant animator and learned on the job how to write scenarios, colour cels, and edit films.  In1936 he wrote, directed, animated, and edited a “manga eiga”, as animation was known in those days, called Shinsetsu Kachi Kachi Yama (新説カチカチ山).

The film belongs to  the J.O. Studios series Hana yori Dangonosuke (花より団子の助). The main protagonist of this series, Dangonosuke, is a cross between the Japanese folk hero Momotaro and Mickey Mouse. Unlike today’s anime which starts with the animation and adds the soundtrack afterwards, J.O. Studios followed the American system of beginning with a scenario and recording the soundtrack before drawing the animation. In many ways, animation was an experimental process at the studio, with the animators studying American animation for inspiration. It was labour intensive work, with not as much financial reward as for feature films.  Ichikawa was actually forced to take over all aspects of the animation of Shinsetsu Kachi Kachi Yama himself when the studio started cutting back staff in order to concentrate their efforts on feature films.

The story could be considered a sequel to the traditional story Kachi Kachi Yama, one of the few Japanese tales in which a Tanuki (racoon-dog) is a bad character. The original story is a brutal tale about a Tanuki who commits terrible crimes.  A Hare witnesses these crimes and punishes the Tanuki for them.  In Ichikawa’s sequel, the Tanuki seeks revenge by kidnapping the Hare and Dangonosuke chases after them to rescue  him. The brutality (not unlike the brutality of the original Grimm fairy tales) of the traditional story is softened substantially, which suggests that children were the intended audience.

The animation has 3 planes: a background, middle ground, and foreground and is animated fairly simply. The character movement lacks the fluidity of the Disney animation that Ichikawa was trying to emulate. This was a year before the groundbreaking release of Snow White and the Seven Dwarfs and even the Silly Symphonies were already of a very high quality and in colour by the mid 1930s. Kenzo Masaoka’s 1935 talkie version of Chagama Ondo (茶釜音頭/A Dance Song with a Kettle) also has much smoother character movement and transitions than Shinsetsu Kachi Kachi Yama. However, taking into account that Ichikawa was a novice animator and he had to do most of the production himself (direction, animation, cinematography and editing), the film is not so bad. The film’s biggest flaw is the music, composed by Akio Nishiyama, which doesn’t match the instruments that are shown.

Historically the film is fascinating because of how closely Ichikawa emulates Disney’s character style. Most of the eyes are black and oval – quite unlike the wide-eyed Bambi eyes that are associated with anime characters today. Bambi came out in 1942, which would mean that Japanese animators like Osamu Tezkua would not have seen it until after the war.

While watching Shinsetsu Kachi Kachi Yama, I was reminded of Steamboat Willie (1928).... and not just because of the attempt at coordination of music and animation.  In the screencap of Steamboat Willie below, notice the body shape of the 'bad' character Captain Peg-Leg Pete: 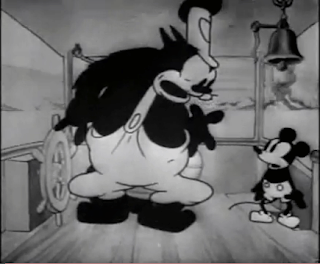 The 'bad' Tanuki in Kachi Kachi Yama has a similar size, body shape, features, and movement: 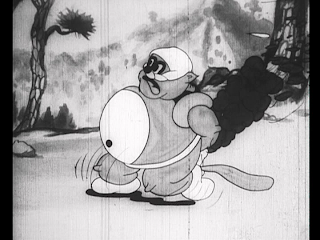 The animals in the orchestra. . . 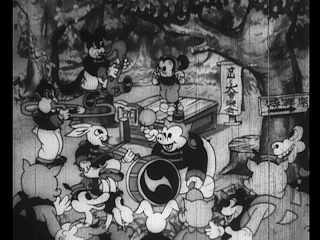 . . .  resemble in facial features, body shape, and character movement of the animals in early Disney shorts like this cow in Steamboat Willie:

Here is a screencap of the hero, Dangosuke, looking at a book of the original Kachi Kachi Yama story for inspiration on how to fight the Tanuki: 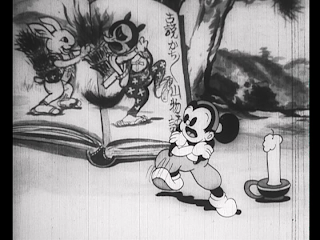 Dangosuke's eyes and face, hair, and even his shoes resemble that of Mickey Mouse, but compare him in this photo, where he had called some warrior friends to help: 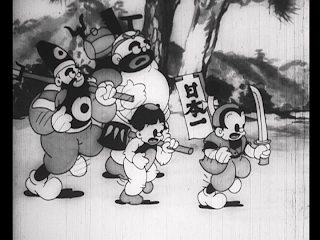 with the Momotaro from Mitsuyo Seo's 1945 war propaganda film Momotaro: Umi no Shimpei:

Or a more contemporary representation of Momotaro for the NHK:

Since its inception, American film has influenced Japanese cinema, from Akira Kurosawa's love of John Ford to Ozu's love of silent comedies. Shinsetsu Kachi Kachi Yama sheds new light for me on just how strongly Kon Ichikawa was influenced by American cinema in the early part of his career.  The influence of Chaplin was easier to spot in his more famous works, but I didn't understand the Disney connection until I saw this animation.  It's a fascinating mixture of Japanese folklore and American animation aesthetics.

This film, which has been preserved by the National Film Center in Tokyo, had limited availability until Kadogawa Entertainment released Style of Ichikawa Kon: Art + CM + Animation on DVD in 2008. This DVD features Ichikawa’s lyrical documentary about Kyoto, Shinsetsu Kachi Kachi Yama, his puppet film Musume Dojoji (1945), as well as over 30 years worth of commercials that Ichikawa directed for companies like Suntory Whiskey and White Lion Toothpaste.

While all the films featured on this DVD were considered rare before its release, Shinsetsu Kachi Kachi Yama and Musume Dojoji are of particular historical significance. Musume Dojoji is a pre-Mochinaga/Kawamoto/Okamoto example of a puppet film made in Japan and was considered lost for decades. Shinsetsu Kachi Kachi Yama is one of the few surviving examples of animation from J.O. Studios, not to mention the fact that it is central to understanding Kon Ichikawa’s early development as a filmmaking artist.