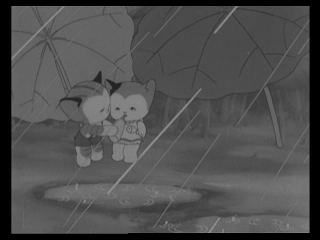 At the peak of his career, Kenzo Masaoka (政岡 憲三, 1898-1988) was sometimes referred to as the Japanese Disney because of the high quality of his work and their broad appeal to young audiences. Masaoka was unable to attain the international renown of Disney due to difficulties in securing funding for his work, wartime constraints (artistic, financial, and lack of access to film stock), and ultimately his early retirement due to problems with his eyesight.
Sute Neko Tora-chan (Tora-chan, The Abandoned Kitten, 1947) was Masaoka’s third to last film: the first in a series of three films featuring a little tabby cat in the lead role. ‘Tora’ is Japanese for tiger, and ‘chan’ is an affectionate diminutive. The film begins on a snowy Christmas day with a choir singing about the arrival of snow as a group of four kittens dance around a giant Christmas tree. As Tora-chan’s bell falls of his neck and a female calico kitten ties it back onto him, the story shifts into a flashback to tell the tale of when Tora-chan joined the family. 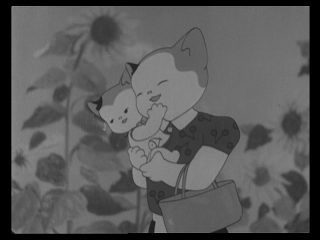 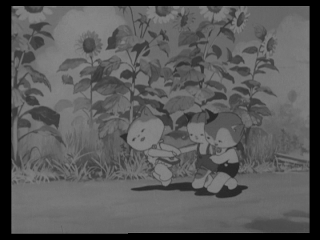 The season of the flashback is suggested as summer by the prominence of sunflowers in the mise-en-scene. A mother calico cat is out for a walk with her three very young kittens when they hear Tora-chan mewling. The mother cat distributes milk from a bottle amongst her own little ones then takes Tora-chan onto her lap and gives him some milk as well. She then decides to bring him home with them. Tora-chan tries to fit in with the family, but the older sister, Mika-chan, is jealous and does everything she can to spoil his fun. The mother cat moves to protect Tora-chan from her jealous fits and Mika-chan decides to run away.
The family frantically searches for Mika-chan around the house, but brave Tora-chan takes it upon himself to run after her with a bottle of milk in his hands. Along the way he and Mika-chan encounter many dangers and adventures, and she continues to be resistant to his attempts to bring her home again. After he saves her on more than one occasion, he finally convinces her to come home with him. He is also welcomed back into the family and the scene flashes forward again to the Christmas scene with Mika-chan and Tora-chan looking out the window together at the wintery scene from the warmth of the family home. 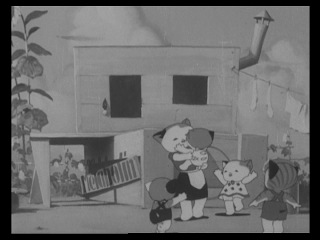 The cats' home is made out of old cartons,
which no doubt would have resonated with children of the
late 1940s who were often living in shanties due to the
destruction of Japanese cities during the war.
The animation is of a very high quality with great attention to detail, beautiful transitions between sequences, and a lovely soundtrack. The dialogue is almost entirely sung and has an operatic quality to it, similar to the Vera Lynn or Edith Piaf style of singing that was popular in Europe during the war. I would imagine that the theme of this film struck a chord with children in cinema audiences of the time, appealing as it does to the numerous children who had lost fathers or were orphaned during the war. Sute Neko Tora-chan promotes the idea that families should open their arms and welcome into their families children who have less fortunate circumstances than themselves. 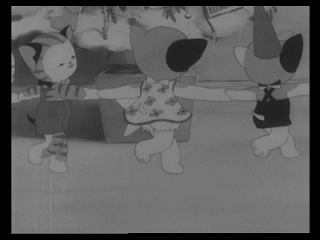 Tora-chan and the calico kittens dancing around
the Christmas tree in the opening sequence.
Apart from the Japanese lyrics, and the features of the characters’ faces that have much in common with Japanese illustration for children of the early part of the 20th century, the film actually looks very ‘Western.’ I suspect that the choice of Christmas, a popular American movie theme, was deliberate in order to avoid problems with the American Occupation censors. The Americans forbade the use of traditional Japanese folktales in animation at this time because of the way in which they had been manipulated for propaganda purposes during the war (esp. Momotaro).  Masaoka had run into troubles with censors during the war for Spider and Tulip because it did not address wartime concerns. It would have been unthinkable for him to use Christmas as a motif five years earlier because American customs were suppressed by the wartime regime. By choosing a Western theme, the film likely avoided trouble with the new breed of post-war censors entirely.
Not only had Christmas not yet become as popular a romantic motif as it is today in Japanese pop culture, but also the use of sunflowers to indicate summer during the flashback is highly unusual for a Japanese film. Sunflowers are native to Cental America, not Japan. As Masaoka studied traditional Japanese painting in Kyoto, in which seasonal imagery play a particularly important role, the choice of sunflowers also stands out as a Western touch. Masaoka was also educated in Western painting under the Paris-educated painter Seike Kuroda (黒田清輝, aka Kiyoteru Kuroda , 1866-1924) – where he likely would have studied artists like Vincent van Gogh. This suggests to me that Masaoka’s choices of Western visual imagery were very deliberate. In Japanese films, summer is usually indicated by the singing of cicadas. Flowers associated with summer in Japan would more likely be lotus flowers (hasu) or morning glories (asagao) - while they do fight off a chicken at one point with lotus leaves, the flowers are not prominent in the film. 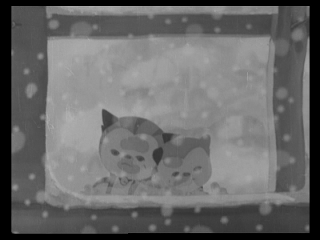 Kittens pressing their faces up to the window
to look at the snow in the final sequence.
Comparing Masaoka to Disney, I would say that his animation equals Disney’s in terms of level of visual sophistication. If Masaoka had had access to funding on the scale of Disney’s I have no doubt that he would have produced work equal to films like Snow White. The choice of kittens for the film may have been influenced by the 1935 Disney short Three Orphan Kittens (part of the Silly Symphonies), which I have heard was a favourite film of Masaoka’s contemporary Kon Ichikawa (市川 崑. 1915-2008).
It is also interesting to note that the film is shot in black and white, when Disney films had been in colour for over a decade by this time. Even after the war, film stock as scarce in Japan, and I am sure that colour stock would have been nearly impossible for filmmakers to get their hands on at this time. The first colour film (as in using colour stock – films were of course hand-tinted in the silent period) in Japan as Teinosuke Kinugasa’s Gate of Hell

in 1953. Not even Kurosawa made films in colour until 1970.
In conclusion, I would like to give a special mention to the composer of the musical score for Sute Neko Tora-chan - it is beautifully composed and performed.  The "yokatta ne" refrain at the end is particularly catchy and has stayed with me all week.  The composer, Tadashi Hattori (服部正, 1908-2008), was an accomplished composer who scored many films of the 1940s and 1950s as well as doing classical and operatic compositions.   He is perhaps most famous for his Akira Kurosawa scores such as The Men Who Tread on the Tiger's Tail

(1947).  He also composed scores for numerous other Toho Studios films by such directors as Mikio Naruse, Ishiro Honda, Tomu Unchida, Kon Ichikawa and Teinosuke Kinugasa.
This film is available on Anido’s DVD Kumo to Tulip: The Works of Kenzo Masaoka, which one can order through their webshop.