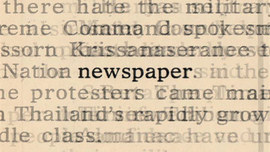 The artist Yoshinao Satoh (b. 1961), also known as Henkama 「へんかま」, is from the city of Shimada in Shizuoka Prefecture. He studied visual design and photography animation at the University of Tsukuba. He currently lives in Yokohama and works as a video game designer and as an artist. Satoh has been making experimental films since the early 1990s.


His earliest works were made on 8mm. His works show a particular fascination with media from newspapers and books to forms of digital media. Learn more about this artist on his official website.