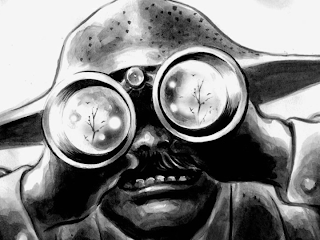 Man-Eater Mountain (Hitokui-Yama/人食山, 2009) is an experimental kamishibai film written, produced, and painted by Naoyuki Niiya (にいやなおゆき, b. 1963 in Okayama Prefecture). Niiya also does the benshi (narration) performance accompanied by Takeshi Tsunoda on shamisen, and with a guest singing and voice acting performance by experimental animator Tetsuji Kurashige (倉重哲二) of KTOONZ in the role of the girl Haruko. The sound editor was Takuro Kouichi.
The film advertises itself as a “kamishibai animation”, but even Niiya himself admits in the prologue that this is no animation in the truest sense of the word because there no illusion of movement is created by the images. Instead, the story is presented visually in a series of hand-painted images that have been edited on the computer where dissolves, pans, zooms, and so on were added for dramatic effect. 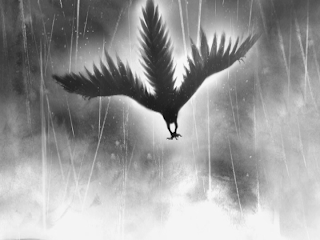 (紙芝居) is a traditional paper drama that can be traced back for centuries in Japanese cultural history. The tradition of kamishibai underwent a revival in the 1920s when gaito kamishibai (paper drama storytellers) would ride from village to village to entertain children. Traditional kamishibai stories consist of 12 to 16 sturdy cards with illustrations that face the audience and the text of the story on the back. They are quite a common way of storytelling in Japanese nursery schools and Kindergartens (read more about them here). 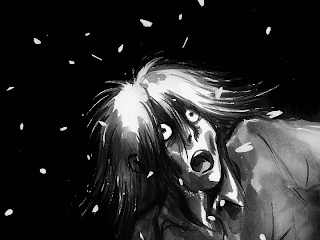 As the title suggests, Man-Eater Mountain is no children’s tale, but rather a gruesome tale which the prologue tells us is based on a folk legend about a police detective who is investigated a series of murders of women from a village at the foot of Hitokui-Yama (Man-Eater Mountain). Niiya’s adaptation of the tale embraces both traditional storytelling methods (the benshi-style narration, the style in which the story unfolds) with modern touches (the costumes of the main protagonists, the use of cellphones).
Artistically there is no denying Niiya’s skill as a painter. His ink brush paintings are beautifully rendered with meticulous attention to detail. The dreamscape mushrooms and the bird soaring through the sky were moments that really captured my imagination with their beauty. The story belongs to the tradition of ghost stories and horror stories in Japan that seem to be rooted in a fear of female sexuality. The graphic horror sequence of the second half of the film features grotesque phalluses and breasts, which one also finds in the art of many contemporary male artists such as Yōji Kuri, Keiichi Tanaami, and Takashi Murakami. 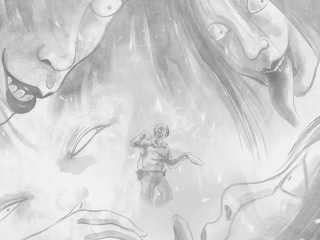 As a female spectator, I found the grotesque orgy of the second half of the film to be an excessive violation of the senses. The concept of female sacrifice to mountains, particularly volcanoes, has often been exploited in Hollywood films, but I had not seen it in a Japanese context before. In ancient Japan, there were tales of hitobashira (human pillars) in which women were buried alive at the base of a building site in order to safeguard the building in the future against enemy attacks or natural disasters, but as far as I’m aware there is no evidence for this happening in reality. Niiya’s film is rife with Freudian symbolism, and the film seems to be an expression of horror for horror’s sake.
Naoyuki Niiya creates his animated movies independently laboring over a period of several years for each film. He teaches at Musashino Art University and also works as a curator, promoter of live events, and a commentator.

Update: Making of clip can be seen here.
This film screened at Nippon Connection 2010 on a double-bill with films by Tokyo Zokei University students.