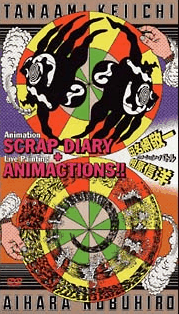 Although this fabulous box set only came out in 2004, it is already out of print and only available via second hand dealers. For just over a decade now the renowned psychedelic artist and experimental filmmaker Keiichi Tanaami

(田名網 敬一, b. 1936) and graphic designer and animator Nobuhiro Aihara (相原信洋, b. 1944) have been collaborating together on animation projects. They both teach at Kyoto University of Arts and Design (here's a photo of Aihara teaching a course last year), and have close ties with Image Forum in Tokyo.
Disc One: Animation Scrap Diary
This disc features Tanaami

and Aihara’s “animation battles”, which Benjamin Ettinger of Anipages describes as a “rather original shiritori-type collaborative process wherein each takes turns at the canvas, drawing over or erasing what the other has just drawn -- a tense artistic confrontation made possible by the trust they've built up over their long friendship.” Tanaami

and Aihara both make animation the old-fashioned way: hand-painting or sketching each individual frame and photographing them onto 16mm film. It is clear that Tanaami and Aihara share a passion for the surreal and the subversive, and they have bonded over their meticulous attention to the minute details of their craft. Each still frame of a Tanaami or Aihara film could easily hang on its own on the wall of a modern museum of art.
While Tanaami and Aihara have complementary styles, spectators familiar with their work will have no problems distinguishing who did which section of the films. The motifs of Tanaami’s paintings (goldfish, figures with enlarged heads,noses, ears, eyes, sexual organs, etc.) are also present in his animations. Aihara, who began in commercial animation, prefers intricate patterns of lines and shapes. The films feature original soundtracks by experimental composers.
Films featured include:
Scrap Diary (スラップ・ダイアリー, 2002) 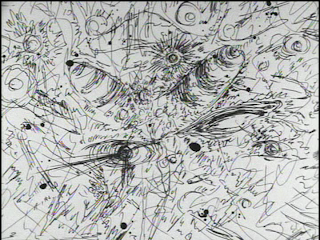 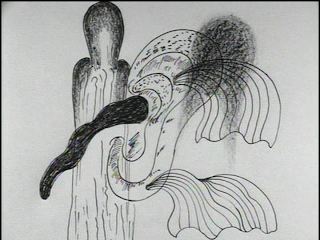 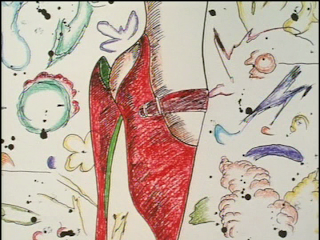 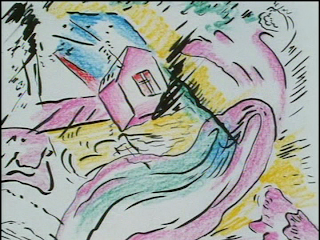 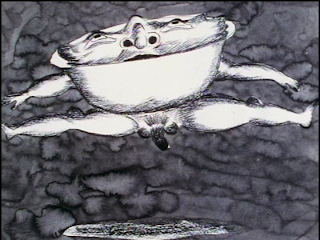 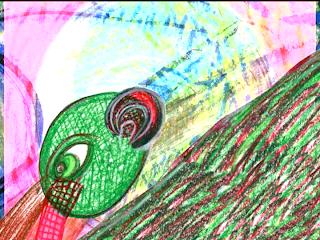 sound design: Kuknacke
The disc also features a solo work by Aihara, Memory of Red (2004), which has a dragonfly theme. The film stands out for its use of crayon/pastel  rubbing to add texture to the images. 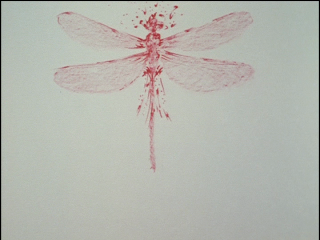 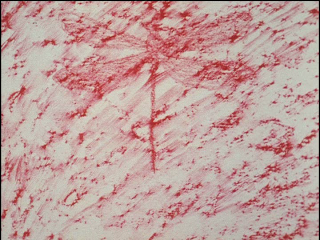 sound design: Aki Nagane
Disc Two: Live Painting Animations!!
This is a documentary of a live animation battle between Aihara and Tanaami that took place on the 10th of March 2004 at EX’REALM in Tokyo. The room is in darkness and each artist wears a white boiler suit and baseball cap and uses fluorescent paint on the black canvas. Shot from five different camera angles, and using dissolves and superimposition to speed up the passage of time, each of the five documentary clips lasts about half an hour. A fascinating glimpse into the artistic process of the artists. 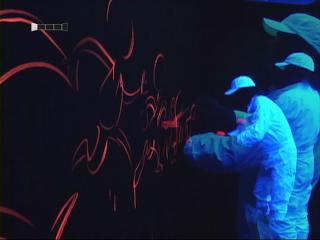 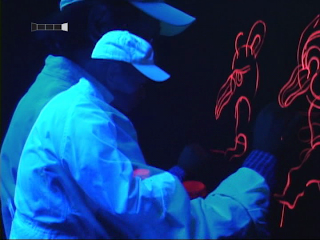 Music: Moodman
Director: Naohiro Ukawa (宇川直弘)
The boxset includes a booklet with biographical information and details about the inspiration and making of the films. Also included are a poster designed by Aihara and a poster designed by Tanaami.
Filmography of Tanaami/Aihara Collaborations
2000 Yami no Kokyū ・Yume no Inei
2001 Fū no Kokyū
2002 Scrap Diary
2002 Running Man
2003 Fetish Doll
2004 Landscape
2004 Yume 10-ya
2005 Trip
2005 Madonna no Yūwaku
2006 Noise
2007 Issun Bōshi (Inch-High Samurai)
2008 Chirico
2008 Paradise for Eye
Please support these artists by purchasing their work: