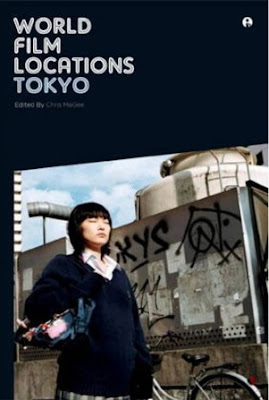 I heard from Chris MaGee of Toronto J-Film Pow-Wow that the book he edited, World Film Locations: Tokyo,

is now available for pre-ordering on Amazon.  It is part of a new Intellect Books series called World Film Locations which plans to examine cities from around the world as movie locations. The first wave of releases is set for late summer and in additon to Tokyo will also include Los Angeles

, and New York. Join the World Film Locations Facebook Page to keep up to date about these books' release dates and future installments in the series.

World Film Locations series will explore and reveal the relationship between the city and cinema by using a predominantly visual approach inspired by The Big Picture magazine’s ‘On Location’ feature.

Alongside short bite-sized texts about carefully chosen film scenes, each book will be illustrated throughout with evocative movie stills and be complimented by short but insightful essays about themes, ideas and key historical periods relating to each individual city.  (source)

Of the 50 film scenes examined in the Tokyo book, I choose the images and did the write ups for 5 films:

Kon Ichikawa's Tokyo Olympiad
(東京オリンピック, Japan, 1965)
Wim Wenders's Tokyo-Ga
(東京画, Germany, 1985)
Dorris Dörrie's Enlightenment Guaranteed
(Erleuchtung garantiert, Germany, 1999)
Kentaro Otani's Nana
( ナナ, Kentaro Otani, Japan, 2005)
Tomoyasu Murata's Nuance
(ニュアンス, Japan, 2006)
It was a lot of fun working on this book because I got to write about such a variety of film styles from documentary to popular feature films.  Locations covered include the Tama River, the Koshu Kaido, Shinjuku, Yanaka Cemetery, and Tokyo Tower.  There are 6 images above because I also tie-in the Nana manga and anime in my write up about Nana.  Most of the films in the book are well known feature films, so it was really great of Chris to let me do one indulgent write up of an alterntive animation piece - Tomoyasu Murata's Nuance.  This short was Murata's contribution to Image Forum's Tokyo Loop (2006).  The book promises to be a visual feast for the eyes.

gives readers a kaleidoscopic view of one of the world's most complex and exciting cities through the lens of world cinema. 50 scenes from classic and contemporary films explore how motion pictures have shaped the role of Tokyo in our collective consciousness, as well as how these cinematic moments reveal aspects of the life and culture of a city that are often hidden from view. Complimenting these scenes from such varied films as Tokyo Story

, You Only Live Twice

and Enter the Void

are six spotlight essays that take us from the wooden streets of pre-19th century Edo to the sprawling 'what-if' megalopolis of science fiction anime. Illustrated throughout with dynamic screen captures World Film Locations: Tokyo

is at once a guided tour of Japan's capital conducted by the likes of Akira Kurosawa, Samuel Fuller, Chris Marker and Sofia Coppola while also being an indispensible record of how Tokyo has fired both the imaginations of individuals working behind the camera and those of us sitting transfixed in movie theatres.

Posted by Cathy Munroe Hotes at 12:34 am