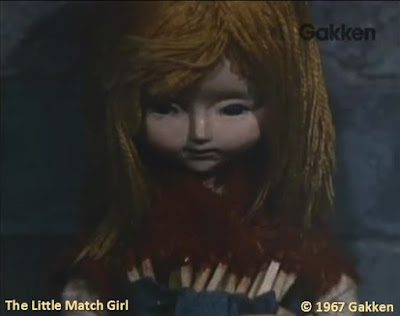 Since it was first published in 1845, Hans Christian Andersen’s tragic tale “The Little Match Girl” (Den Lille Pige med Svovlstikkerne) has been adapted into a wide variety of media from theatre to manga.  Director Kazuhiko Watanabe and screenwriter/producer Matsue Jinbo’s adaptation, The Little Match Girl (マッチ売りの少女 / Machi Uri no Shōjo, 1967), was Gakken Film Company’s latest in a series of puppet adaptations of international fairy tales.  Since 1958, they had already adapted many Japanese folk tales, as well as several by the Grimm brothers and Aesop.  In 1970, they would go on to adapt another popular Andersen tale “The Ugly Duckling” (Den grimme ælling) – The Ugly Duckling (みにくいあひるの子/ Minikui Ahiru no Ko).

The adaptation is quite faithful to the original story.  It begins with the little girl asleep in her bed in a cold room on New Year’s Eve, with the wind blustering in through a broken window.  She looks to a portrait of her late grandmother for comfort.  Her father, depicted only by his shoes and his stern voice, tells her to get up and get to work, warning that she should not come home if she hasn’t sold any matches.  The streets are busy with people shopping for Christmas.  One woman notices the girl and is about to buy matches, only to be distracted by a friend.  A kindly grandmother with her impatient grandson trigger the little girl to recall her own grandmother.

The tragedy of the little girl’s situation is emphasized by a scene contrasting her life with those of children playing in the snow.  The girl passes forlornly by the park as the children laugh and throw snowballs at each other.  The original author of this tale gets a nod in this scene as the park features a bust that looks very much like Hans Christian Andersen himself.  In a dramatic sequence the girl almost gets run over by a horse-drawn carriage, causing her to lose her shoes (a dog takes off with one of them) and scattering her matchsticks on the ground.

Night falls, and the girl’s luck does not improve.  She wanders the city streets a lonely figure peering in at the warm interiors as doors and curtains are closed in her face.   She shivers under a streetlight, recalling her father’s words telling her not to bother coming home empty handed.  She curls up shivering on a step and lights a match.  In the match’s light she sees a vision of a warm hearth.  The match blows out so she lights another and sees a vision of a Christmas feast.  A third match brings up a vision of a Christmas tree covered in candles.  The candles transform into stars and she sees a shooting star.  In a terrible premonition of the girl’s fate, she recalls that her grandmother used to say that a shooting star means that a soul is travelling to heaven.  The match girl lights her remaining matches in the desperate hope of seeing her grandmother again.  The sequence ends with the girl embracing her grandmother.

The next day, the townspeople wake to a lovely winter’s day, bright with sunshine.  The promise of the day is blighted by a gathering crowd around the girl’s body.  They react with shock and pity, and the film does not shy away (as many adaptations do) from showing the girl lying still on the ground.

The elaborate sets and costume design for this puppet animation are simply wonderful.  Great care has been taken to recreate a 19th century European city.  The attention to detail can be seen in particular in the scene when the girl walls through the city as night falls.  A whole city street was built including lit interiors with moving puppets in each of the windows or open doorways.  The camera moves through the city at ground level following the girl in a very complicated sequence. 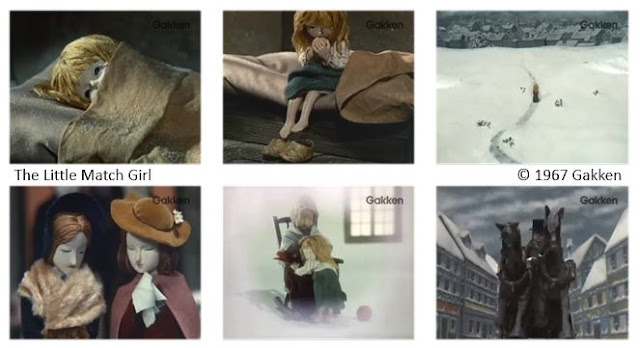 In fact, no expense seems to have been spared as each scene appears to use a new set.  The most brilliant sequence technically is the scene when the girl almost gets run over by a horse-drawn carriage.  This is shot from the perspective of the girl, with the horses running straight at the camera.  Compared to the earliest Gakken puppet animations, this sequence shows to what a high standard the level of puppet animation at Gakken had achieved by the late 1960s.  It conveys the heightened drama of the moment using the same camera shots as a classical Hollywood live action sequence.

The other marker for me of the level of sophistication of the cinematography is the way in which the night sequences are filmed.  In particular, the little match girl sitting under the streetlight in a spotlight that seems to emanate from the streetlight itself, followed by a very sophisticated shot of her top lit with snow gently falling.

The icing on the cake is the lyrical score by Hikaru Hayashi (林光, 1931-2012).  Hayashi scored over 100 films in his career, including over 30 collaborations with the renowned filmmaker Kaneto Shindō (新藤 兼人, 1912-2012).  In fact, before The Little Match Girl, Hayashi had already composed the brilliant soundtracks to Shindō’s The Naked Island (1960), Kuroneko (1961) and Onibaba (1964).  He had previously worked with Gakken for the puppet animations Poron Guitar (1959) and Taketori monogarai (1961).  For The Little Match Girl, Hayashi took a classical European approach, using strings and woodwind instruments to express the emotional context of the drama.

Gakken’s adaptation holds up extremely well in comparison with the three most well-known animated adaptations of the tale.  The character design is much better than that found in Charles Mintz’s 1937 animated short which was produced as part of Columbia Pictures’ Color Rhapsodies series – the studio’s attempt to emulate Disney’s Silly Symphonies.  It was made using a two-strip Technicolor process and puts the emphasis on an extended dream sequence that suggests the little girl is going to heaven.  The colours are kitschy and the little girl’s features are so exaggerated as to be distracting.  It was however nominated for an Oscar in 1937, but was no match for the Disney classic The Old Mill (Wilfred Jackson, 1937).

Tōei Dōga included the story in its 1968 anime The World of Hans Christian Andersen (アンデルセン物語 / Anderusen Monogatari) directed by Kimio Yabui.  It alters the story by adding more characters and presents a romanticized, melodramatic take on the story.  Although this is a very good, if schmaltzy, take on the story, I prefer the subtlety and nuance of Gakken’s version.

The Disney adaptation The Little Matchgirl (Roger Allers, 2006) – with “Matchgirl” written oddly as all one word – was originally intended to be included in the canceled project Fantasia 2006 (aka Fantasia III).   Although the music score is beautiful, the animation does not “dance” to the music as it did in the original Fantasia (1940).   It transfers the story from 19th century Denmark to 19th century Russia, doubtlessly because they chose to pair the story with the music of Alexander Borodin.   It paints a grey and bleak picture of the little match girl’s world.  Colour only seeps into the picture when the girl strikes the match and has visions of an idealized Christmas with her late grandmother.  Even more so than the Gakken adaptation, it allows the visuals to speak for themselves, but it does so in a way that assumes the audience has some knowledge of the story.  The girl’s death is depicted in such a way that the less keen observer might believe the girl is being rescued at the end.

The Little Match Girl was acknowledged with an award by the Ministry of Education in 1967 as well as an award at the 22nd Mainichi Film Awards.  It also screened at festivals in Europe winning the Golden Mermaid Award at a festival in Copenhagen in 1975 to celebrate the centenary of the passing of Hans Christian Andersen.  The film was dubbed in English and distributed to schools and libraries in the USA by Coronet Instructional Films in 1968.