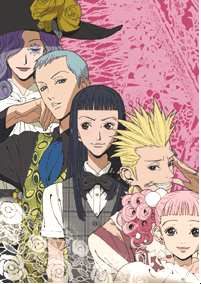 There has been much grumbling on blogs about the adaptation of Ai Yazawa’s Paradise Kiss manga into an anime. The main complaints have been about the unusual animation style, in contrast to other mainstream anime-series, and the excising of a great deal of the original manga storyline. I personally like that the animation staff took risks by experimenting with technique in this series. As to the latter complaint, I’m afraid that cuts are inevitable when adapting a work of art from book to the big screen. Unlike the adaptations of series like Masashi Kishimoto’s Naruto and Yazawa’s current hit Nana, Paradise Kiss was only funded for 12 episodes, meaning that the five-volume manga had to be stream-lined during the adaptation process.

Director Osamu Kobayashi (小林治) (along with the original manga itself) can largely be held responsible for the avant-garde look that Paradise Kiss has in contrast with other popular anime series. Kobayashi started out doing animated shorts and has made a number of music videos for Studio 4ºC. Some features of his style include irising, unusual camera angles, off-center framing, and a collage style that often features the mixing of monotone backgrounds and hyper-colourful moving figures.

The manga-ka Ai Yazawa (矢沢あい) is currently one of the top selling manga artists for young women in Japan with Nana (ナナ) spawning a hit live action movie as well as a TV anime series. Most of her manga incorporate themes of fashion and punk rock music. Yazawa began her career studying fashion design and the flamboyant style of Vivienne Westwood serves as a key influence in her work.

The central narrative of Paradise Kiss is a shōjo coming of age story. Yukari Hayasaka is in her final year at a private high school and is preparing for university exams. She nurses a secret crush on her classmate Hiroyuki Tokumori. In the first episode, Yukari is discovered on the streets of what looks like Omotesando by Arashi Nagase who along with Isabella (née Daisuke Yamamoto) a tall, blue-haired transvestite, whisk Yukari away to their fashion design studio Paradise Kiss. There she meets Arashi’s girlfriend, the pink-haired Miwako Sakurada, who welcomes Yukari as a friend by giving her the nickname Caroline.

The fashion students feel that Yukari, with her tall, slender form and long, straight black hair (a novelty in this world of fantastic hair colours) would be the perfect model for their final design project. Enter the blue-haired George Koizumi, chief designer of the group and new focus for Yukari’s unfocused teenage desires.

The series engages the audience with a clever mix of realism and fantasy. In terms of realism, Yukari’s ambivalence about whether to become a model or follow her mother’s wishes and attend university will strike a chord with young women of the same age. Yukari also struggles with her romantic feelings for George, difficulties communicating with her mother and a mostly absent father who works away from home.

At the same time, Paradise Kiss seduces with its glamorous depiction of the world of fashion and the sophisticated and exotic people who inhabit it. George fascinates Yukari with his suave good-looks and expensive lifestyle, which is given a dash of realism with his alcoholic mother and distant father. Sometimes the fantasy element of the tale strays away from credibility. For example, the idea that Isabella could live in such a castle and commute to Harajuku is highly unlikely and a bit over-the-top in my humble opinion.

The quirky, more avant-garde animation style of this anime makes it stand apart from other shoujo anime. The idea of mixing of monochrome images of real Tokyo cityscapes with bright colourfully rendered characters and clothes derives from Yazawa’s manga, but the animators have added unusual little creatures who wriggle through still images of locations. I also love the unusual wipes such as rolling flowers that transition between scenes.

The opening and closing sequences deserve special mention. The opening sequence features a montage of images from Tokyo’s fashion district along with motifs and characters from Paradise Kiss. The accompanying song is ‘Lonely in Gorgeous’ by Tomoko Kawase as her alter ego Tommy February6. The song’s theme and the persona of the singer fit well with the anime.

Experimental animation artist Hiroyuki Imaishi (今石浩之) created the closing animation. Chibi versions of the main protagonists dance to the song ‘Do You Want To’ by indie Scottish band Franz Ferdinand. The animation here is tongue-in-cheek and a lot of fun to watch. The use of chibi (rounded faces and bodies) fits well as they use chibi characters often in the series to show the internal emotions and reactions of the characters.

Paradise Kiss is a sequel to Gokinjo Monogatari (ご近所物語, Neighbourhood Story) which told the story of Miwako’s older sister Mikako Kouda, an aspiring fashion designer and her longtime friend and love interest Tsutomu Yamaguchi. Although it is not necessary to know Gokinjo Monogatari in order to enjoy Paradise Kiss, it does provide fans of the first series with a lot of inside jokes and references to spot. Not only do Mikako, now a successful fashion designer with her own label called Happy Berry, and Tsutomu makes cameo appearances, but so do other smaller characters or their offspring (Arashi and Hiroyuki).

My overall verdict on the adaptation is that it is quite a good one given the limitations the animators had to work with. I think the right choice was made in focusing mainly on the Yukari story arc. However, the sudden jump to Isabella’s story at the beginning of episode ten was awkwardly done. Every episode except for that one starts and ends with Yukari’s interior monologue. I suppose Kobayashi felt it needed to be added somewhere in order to explain the ending to those who did not read the manga, but it could have been handled more adeptly. The final episode also feels a bit rushed as they tried to put too much storyline into it at the last minute. So much so, that they had to scrap the Imaishi animation for more wrapping up of loose storylines.

For episode reviews and screencaps, check out these fantastic blogs: