Yuki Tanada’s film Ain’t No Tomorrows (Oretachi ni asu wa naissu, 2008), made a great impression on me at last year’s Nippon Connection (read review here), so my expectations were high for One Million Yen Girl (Hyakuman-en to Nigamushi Onna, 2008). I am delighted to report that Tanada did not disappoint.
Few young women could be as unlucky in life as poor Suzuko Satō (Yū Aoi of Honey and Clover

), the main protagonist of One Million Yen Girl

. In taking her first tentative steps of independence outside of her parents’ home, she finds herself swept up by forces that seem beyond her control. Suzuko’s inability to speak up for herself leads to her sharing an apartment with her friend’s dodgy boyfriend rather than the friend, but she does her best to put up with his strange behaviour. When he goes a step too far by destroying a stray kitten that she has rescued, Suzuko seeks revenge by throwing away all of his possessions.
This is only the beginning of Suzuko’s misfortunes, for her roommate claims that among his possessions was one million yen in cash, and Suzuko finds herself imprisoned for a short time for theft. When she returns to her parents’ home, Suzuko finds she cannot live with the neighbourhood gossiping about her, and fears particularly for the reputation of her beloved younger brother Takuya. Determined not to be a burden to her family, she sets out on a road trip of sorts across Japan.
Suzuko’s goal is to earn one million yen (approximately $10,000/€8,000) in each new destination and then move on. The figure one million yen not only matches the amount that she allegedly threw away, but it is also the practical amount that she needs to start up in a new location. Renting accommodation in Japan is a very pricey affair, with landlords demanding key money and other non-refundable fees, a deposit and sometimes several months rent in advance.
The road trip then unfolds as a kind of a journey of self-discovery for Suzuko. Her thoughts and impressions are shared with the audience through the device of voiceover narratives of the postcards she writes to her brother back home, who suffers at the hands of bullies and finds inspiration in his sister’s independent-mindedness. Suzuko first finds herself at the seaside where she discovers that she has a talent for making kaki-gōri (shaved ice flavoured with syrup). She seems to fit in well with the family who runs the beach hut where she works, but she arouses the interest of a young man at the beach who is attracted to her aloof manner. His persistent attempts to woo her coincide with her bank account reaching one million yen, and Suzuko packs her things and heads to the mountains.
In the mountains, she discovers a natural talent for peach-picking but inevitably finds that forces beyond her control are pulling her to play a certain role in the community. Once again, Suzuko’s inability to firmly speak up for herself leads to trouble and she leaves, a million yen richer,  to find work at an urban gardening center. Here she meets the handsome and charismatic Nakajima-san (played by Mirai Moriyama of Twentieth Century Boys

) and finds herself dallying a little longer than before. The plot then concerns itself with the question of whether or not falling in love will end her journey or if she will move on again once she reaches one million yen. 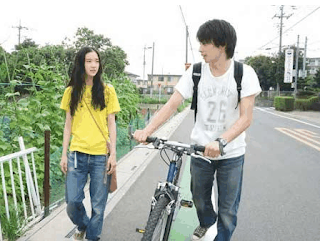 As in Ain’t No Tomorrows, Yuki Tanada demonstrates her skill in bringing out believable performances from her young cast. Yū Aoi, with her winsome face and teenager slouch, plays Suzuko with great warmth and compassion. Tanada and cinematographer Kei Yasuda (Moon and Cherry, Loved Gun) compose beautiful long shots to show how Suzuko awkwardly stands in relation to others. Most of the film is composed of still, long takes, which contrast with the few scenes in which Suzuko is emotionally excited. Then the cinematography switches to handheld cameras to exaggerate Suzuko’s inner turmoil.
Tanada does a wonderful job of balancing comedic moments and moments of reflection and personal sorrow and on the whole the pacing of the film is rather good. If I had been the editor, I might have suggested tightening up the last twenty minutes of the film a bit. The film does drag here, as though Tanada wasn’t certain as to how she wanted to end the film. There were at least two or three moments where the film could have ended but didn’t. Ultimately, while we all hope for a Hollywood ending for Suzuko, but the Japanese title suggests that the real question at the end of the film is whether or not her ‘nigamushi’ (sour-face) is replaced with a more cheerful expression.
Quibbles about the ending aside, One Million Yen Girl, is enjoyable viewing. I particularly like how the film explores issues about whether or not our lives are driven by our own desires or by forces beyond our control. The scenes at the seaside and in the mountains were particularly insightful into how an outsider becomes a part of a new community and the ensuing awkwardness of conflicting expectations of members of that community. I felt the film was well received by the Nippon Connection audience and I would recommend planning to go out for a coffee with friends after screening it so that you can debate your feelings about Suzuko’s decision-making (or lack of decision-making). It certainly made me feel a bit natsukashii (nostalgic) for that time in my own life.
Director & Screenwriter
Yuki TANADA
Cinematography
Kei YASUDA
Music
Eiko SUKURAI & Ko HIRANO
Cast
Suzuko Satō • Yū AOI
Ryōhei Nakajima • Mirai MORIYAMA
Haruo Fujii • Pierre TAKI
Yuuki • Terunosuke TAKEZAI
Takuya Satō • Ryūsei SAITŌ
Fujii Kuni • Sumie SASAKI
Films by Tanada available on DVD: