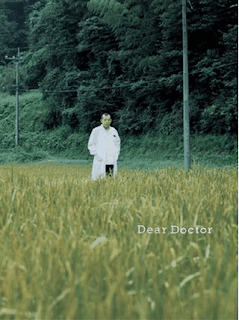 Miwa Nishikawa’s third feature film Dear Doctor (2009) takes on two challenging issues facing modern Japan: its rapidly aging population and the lack of young doctors taking up practice in the countryside. The rural community depicted in Dear Doctor has been fortunate enough to have Dr. Ino, a charismatic, well-loved doctor, for three years, but the film opens with his inexplicable disappearance. Has he been in an accident? Has he run away? Is he even a qualified doctor? A pair of city detectives arrive on the scene to unravel the mystery of Dr. Osamu Ino and discover that there are no simple answers to these questions.
Part-detective story, part-dramatic comedy, Miwa Nishikawa’s film is photographed beautifully by Katsumi Yanagijima (Zatoichi

). Yanagijima has captured the beauty of the Japanese countryside with its vibrant colour palette. The framing takes in the rolling hills of the countryside during outdoor scenes, and inside Yanagijima uses a lot of close ups to pick up the important visual clues which reveal important character information about Dr. Ino and how the other characters interact with him. The splendor of the cinematography and the unhurried tempo of the editing is complemented by the bluesy music of the band More Rhythm (モアリズムの).

Stellar cast: Kagawa, Yo, Yachigusa, Shōfukutei & Eita
Without a doubt the success of this film rests upon the stellar performances by the cast. Each character represents a well-known ‘type’ in small town Japan: the often drunk mayor with his delusions of grandeur, the young man from Tokyo (Eita of Nodame Cantabile and Toad's Oil fame) with an idealistic vision of what life in the countryside is like, the lonely elderly woman (Kaoru Yachigusa) who doesn’t want to become a burden to her children who have moved to the big city, and so on. While most of the attention focuses on what secrets the doctor may be hiding, in actuality all of the key characters has a facet of their character that they are trying to hide from others.
Tsurube Shōfukutei (Kabee: Our Mother), a noted rakugo performer and television personality, plays the conflicted lead role with great delicacy. Kimiko Yo (Departures

), who plays his nurse assistant Ohtake, acts as a perfect comic foil for the doctor. The exchange of glances during home visits and emergency procedures speak volumes more than any of the dialogue. Ino’s character is further revealed through his relationship with his new intern Dr. Soma (Eita), and his complicated relationship with his beautiful elderly patient Torikai-san (Yachigusa). Rounding off this seasoned cast is Yutaka Mastuhige as the detective (he was hilarious in Talk Talk Talk which played at last year’s Nippon Connection), and Teruyuki Kagawa (Tokyo Sonata

) as the pharmacist.
In a light-hearted way, the film takes on the difficult questions of what makes a good doctor: technical ability or actually caring about the lives of their patients? Furthermore, what will happen to Japan’s rural communities if all the young people continue to abandon them for the city? In many ways, the film can be seen as a lament for a time when doctors did not simply treat patients as statistics in hospital beds but real people to whom they visit in their homes. It becomes clear during the course of the film that the villagers value Dr. Ino’s personality more than his credentials – a point which Chris MaGee of Jfilmpow-wow had trouble swallowing.
MaGee did his best during his extended stay in Germany to convince me that Dear Doctor was a terrible film, but I’m afraid his efforts were unsuccessful. While it is certainly not a masterpiece, Nishikawa has put together a solid dramatic comedy with beautiful cinematography and topnotch performances by the cast. Having started last Saturday with Yongi Yang’s heartbreaking documentary Son – the Other Myself (Sona, mo hitori no watashi, 2009), it was great to end my day with a light, charming comedy. It was a real crowd-pleaser with the Nippon Connection audience, and it is definitely a film I would watch again.
Director & Screenwriter
Miwa Nishikawa