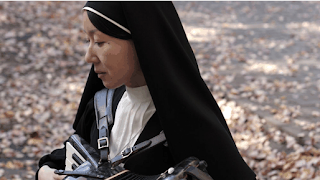 For her debut feature film, Autumn Adagio (Fuwaku no Adagio, 2009), Tsuki Inoue has taken on the normally taboo topic of menopause. The ‘autumn’ in the title is a poetic interpretation of the term ‘fuwaku’ (不惑) in the Japanese title, which means ‘past forty’. Interestingly, it also implies wisdom or ‘following the right course’ in one’s life. Thus Inoue’s film follows the personal journey of a religious sister or nun (the kind of vows she has taken are not made clear in the film) named Sister Maria (Rei Shibakusa) as she enters early menopause in her early forties.
Seasonal imagery is a crucial part of Japanese art and literature, so Inoue’s choice of an autumnal setting complements the theme of Sister Maria entering the autumn years of her life. Autumn Adagio is a carefully crafted film which uses colour, framing, music, and gesture to impart the emotional journey of its central protagonist. Inoue’s deliberate use of visual and aural clues to impart poetic and emotional truths is very reminiscent of the work of Krzystof Kieslowski – particularly in his Trois couleurs trilogy (1993-94).
Autumn Adagio is filled with moments of contemplation, with Sister Maria either in prayer, in her Japanese-style room, or in an autumnal square next to the church. The actress Rei Shikabusa does an outstanding job of conveying the complexity of the character of Sister Maria through the subtleties of her interactions with members of her congregation and in her daily activities. Unfortunately, the sister seems to have no one to confide in about the changes that her body is going through and instead relies upon information that she overhears women in her congregation discussing.
Sister Maria’s emotional journey through menopause is impacted by three very different encounters with men. The first is Takemoto, an obsessive man in the congregation who seems desperate for time alone with the attractive sister. The second is a ballet dancing instructor who encourages Sister Maria to engage in a more active way with the music that she plays. The third man, Muraoka, has been ignoring the attempts of the priest to communicate with him about his terminally ill mother. Sister Maria is charged with the task of hand-delivering a letter from the mother to the reclusive Muraoka. Each of these men represents a different type of challenge to the solitary life of religious dedication that Sister Maria has been living and the way in which she deals with each new masculine intrusion into her life forms the arch of her character development throughout the film.

My only criticism of Autumn Adagio would be in the credibility of the lifestyle of the nun. According to her interview with Midnight Eye, Tsuki Inoue is a not a Catholic, but a Buddhist and did a great number of interviews with Christians for the pre- production of this film. I was raised agnostic myself but was taught by nuns during my college years, have many friends in the Catholic church in Hokkaido, and even had long discussions with a friend who was seriously considering entering the sisterhood in England. I found the depiction of Sister Maria as the only nun or religious sister at her church unusual as normally sisters live together and support one another. While Sister Maria was wise to avoid too much contact with the creepy Tatemoto, her cold dismissive treatment of him was also very unusual. It is more likely that she would have voiced her concerns about the man to the priest as other sisters where strangely absent from the screen.
The most unsettling thing about Sister Maria was that her life seemed so boring. The nuns and sisters that I have come into contact with generally lead quite busy lives as their higher calling leads them to either devote themselves to prayer and contemplation or to work in education or service ministries. I have never met a nun or sister who wasn’t busy teaching, helping the poor, or doing something productive with their time. As there are a wide variety of approaches to religious orders within the Catholic church, this story could well be viable, but I was concerned that the film was at times betraying preconceptions that people outside of the faith have about the practice of being a woman dedicated to a life of religious devotion. It occurred to me while watching the film that I would love to see a filmmaker with the skills of Inoue tackle the issue of a woman going through menopause because of career or personal choices, rather than religious ones. I hope that Inoue’s film opens the door for more films on women at this stage in life in general, because it is a subject so rarely addressed by feature films.
These questions aside, I admire the film for its tight structure, visual beauty, and moving performances. For a young filmmaker, Inoue demonstrates a keen eye for framing and visual metaphor. Her matching use of music and rhythm in her film is also impeccable.  I liked that the film made sparing use of dialogue, but the pacing was never boring. Like the titular adagio, this film has a slow and gentle tempo, but without any moments of lethargy. Many of the more contemplative films at Nippon Connection this year were very long (usually 2 hours), but Inoue has already learned the lesson that less is sometimes more and kept the film at a satisfying 70 minutes. A visually stunning film with a poetic take on a woman’s journey into middle age.
Direction and Screenplay
Tsuki INOUE
Production
Dongyu Club
Cinematography
Yohei OMORI
Music
Rei SHIBAKUSA
Cast:
Rei SHIBAKUSA
Peyton CHIBA
Takuo SHIBUYA
Rumi TACHIBANA
Kazuhiro NISHIJIMA
Other great films by women: