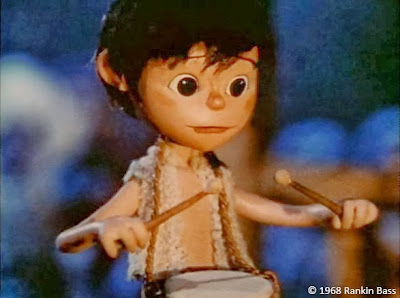 Rankin Bass’s 1968 Christmas Special, The Little Drummer Boy, was inspired by the popular mid-20th century Christmas carol “The Little Drummer Boy” by Katherine Kennicott Davis, Henry Onorati, and Harry Simeone.  Davis claimed to have based her 1941 song on a Czech carol.  It was initially recorded by the Trapp Family Singers under the title “Carol of the Drum”, and Harry Simeone’s 1958 arrangement of the song for The Harry Simeone Chorale album Sing We Now of Christmas became a big hit in the US.

So to honor Him, pa rum pum pum pum,
When we come.

Shall I play for you, pa rum pum pum pum,
On my drum?

Then He smiled at me, pa rum pum pum pum
Me and my drum.

The purported Czech origins of the song have never been verified, but the drummer boy story shares many similarities with Anatole France’s adaptation of the medieval legend “Le Jongleur de Notre-Dame” (1892), a religious miracle story of a juggler turned monk who has no gift to offer a statue of the Virgin Mary but his ability to juggle.  The other monks accuse him of blasphemy, but the statue comes to life and blesses the juggling monk. 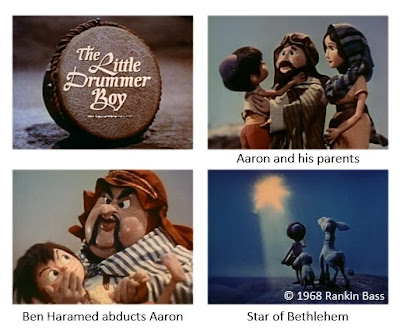 The perennial nature of the song has led many to believe that the story has its origins in the bible, but it is actually a fictional narrative that imagines what that first Christmas might actually have looked like through the eyes of a young boy.  It seems likely that the spirit of the story was inspired by the biblical story of “The Widow’s Offering” about a poor woman who gives all her meagre wealth in charity: 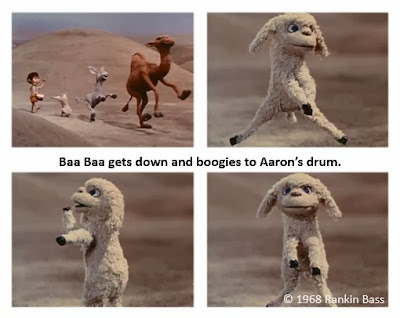 Romeo Earl Muller, Jr. – credited as Romeo Muller – adapted the song into the teleplay.  Muller had been with Arthur Rankin, Jr. and Jules Bass of Rankin Bass from the very beginning writing their first network specials Return to Oz (1964) and Rudolph the Red-Nosed Reindeer (1964).  Having started off his career writing material for Jack Benny, Muller was adept at injecting comedy into his scripts, and The Little Drummer Boy is no different – Ben Haramed (José Ferrer) and his motley gang of performers bring some screwball levity to an otherwise serious tale.

The little drummer boy is a misanthrope orphan called Aaron (Ted Eccles), who comes from a family of shepherds.  It seems quite remarkable that a boy so young could have developed such bitterness towards the human race, but he has been scarred by the slaughter of his family by thieves who burned down their home.  He now wanders the desert with his drum – a gift from his parents – with his animal friends Samson, a donkey, Baa Baa, a lamb, and Joshua, a camel.   The animals love Aaron’s playing and dance whenever he performs.

Ben Haramed and his accomplice Ali capture Aaron and force him to travel with them to Jerusalem to perform for the public with their ragtag troupe of acrobats.  Aaron’s act is the only one to please the crowds, but the cheers only enrage Aaron who is reminded of what people like them had done to his family and he shouts his hatred at them, calling them thieves and bandits.  The people chase them out of Jerusalem.

In the desert, they encounter the three “wise men from the east”, Melchior, Gaspar, and Balthazar, on their way to Bethlehem.   Although the narrator – the incomparable Oscar-winning screen legend Greer Garson (Mrs. Miniver, Pride and Prejudice) – tells us these three are from the “Orient”, they actually represent three very different racial types.  In Western church tradition, Melchior is depicted as a king of Persia, Gaspar as a king of India, and Balthazar as a king of Arabia.  In The Little Drummer Boy, Melchior looks like Henry the 8th, Gaspar is a tall slender African wearing a turban, and Balthazar looks like a Chinese stereotype.  Paul Frees – a regular Rankin/Bass collaborator – voices all three.  Gaspar does most of the talking and Frees gives him a deep, “Ol’ Man River” kind of voice.  At least he doesn’t go for an “Oriental” accent for Balthazar.  I found the depictions of the wise men odd (Africans and Europeans from the east?), but not offensive – it’s certainly mild compared to other ethnic stereotypes in animation of this era (Mr. Magoo’s houseboy Cholly springs to mind).  The most offensive stereotype in The Little Drummer Boy is the depiction of an Arab (Ben Haramed) as a crook – a stereotype still abundant in US pop culture – but at least he’s being voiced by the suave José Ferrer (Cyrano de Bergerac, Moulin Rouge) who makes Ben Haramed charming.

The magi need a new camel, and Ben Haramed sells Aaron’s camel friend, Joshua, to them.  Aaron refuses his “share” of the gold Ben Haramed gets in his deal and goes off in search of Joshua.  They follow the star to the town of Bethlehem and see the shepherds doing the same.  Aaron finds Joshua among the crowds gathered at the stable, but before he can rescue him Baa Baa, the lamb, gets run over by a speeding Roman chariot.  Distraught, Aaron approaches the stable and is filled with wonder at the sight at the manger.  After King Gaspar presents his gift to the baby Jesus, Aaron asks him to save Baa Baa, but Gaspar tells him he is a mere “mortal king” and suggests that the “king among kings” could help him.  Aaron does not understand how this is possible, and Gaspar explains that he does not need to understand he should only go to him.  “But I have no gift to bring,” explains Aaron, which of course cues the Vienna Boys Choir to begin singing “The Little Drummer Boy.”  Aaron plays his drum for the infant Jesus, and all around nod their heads in encouragement.  This heartfelt gift, “given out of the simple desperation of pure love” is rewarded with his lamb being healed.  The story ends with the voice of Greer Garson proclaiming, “Blessed are the pure in heart, for they shall see God”
The Little Drummer Boy

was restored in 2005 for DVD release, but they did not go overboard with digitally remastering it to look pristine.  The flecks and scratches of the film are still present, but the colours are good and the soundtrack is very clean.   While I do think that animation classics should be preserved and restored, I do not like it when they go too far so I was glad to see that the Rankin Bass films have kept their unique 1960s charm.  There is an odd little moment where Paul Frees reads one line of narration instead of Greer Garson – but only keen listeners would really notice this.  Perhaps she was unavailable to record additional dialogue?  There is no explanation for this in Rick Goldschmidt’s The Enchanted World of Rankin/Bass. 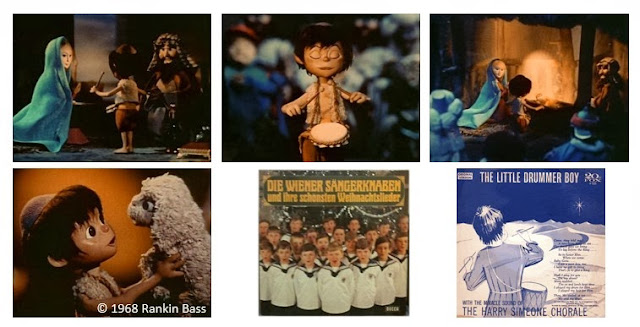 The Japanese staff do not receive any onscreen credit.  While the script and design were all done State-side, the task of making the puppets and doing the Animagic stop motion animation went to Tad Mochinaga’s MOM Productions in Tokyo.  Arthur Rankin normally supervised the Rankin Bass animation projects in Japan, but grunt animation work was done by Takeo Nakamura (中村武雄) and Hiroshi Tabata (田畑博司).  The sets are truly spectacular and the puppets have been beautifully crafted.  The stop motion has been expertly done, with a wide variety of camera distances and angles.  There are nice little touches such as the credits superimposed over the drum and the use of light to denote holiness.  My favourite moment is Baa Baa dancing to Aaron’s drum.  Although I prefer “The Insane Paganism of Rankin and Bass”, the final manger sequence of Aaron playing his drum to the sound of the Vienna Boys Choir is undeniably lovely.