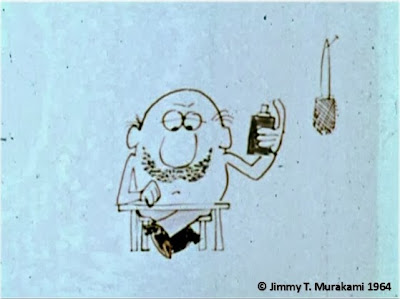 Jimmy T. Murakami, whom Giannalberto Bendazzi has called one of the “Globe Trotters of Animation”, began The Insects (aka Insects / 虫, 1964) while living in London, England in 1961.  By this point in his career, Murakami had already worked for Stephen Bosustow at UPA, Ernest Pintoff in New York, and even Toei Dōga, before heading to the UK to work for George Dunning (initially for UPA’s London Office, but then for Dunning’s newly formed company TVC London).

TVC specialized in commercial animation, but The Insects was a pet project that Murakami did independently.  As he explained in a 2001 interview with Andrew Osmond: “I made Insects at home, writing, animating, tracing, painting, I did the whole thing. I made it with a lamp under the table as a bottom-light. I couldn't afford to shoot it, so I went to Dunning and told him about this film, all painted and ready, and asked him if he could shoot it for a co-producer credit. He said yeah, he loved the story. So the film went through TVC and they added a great soundtrack, and it ended up winning the British Academy Award.” (Source: AWN) 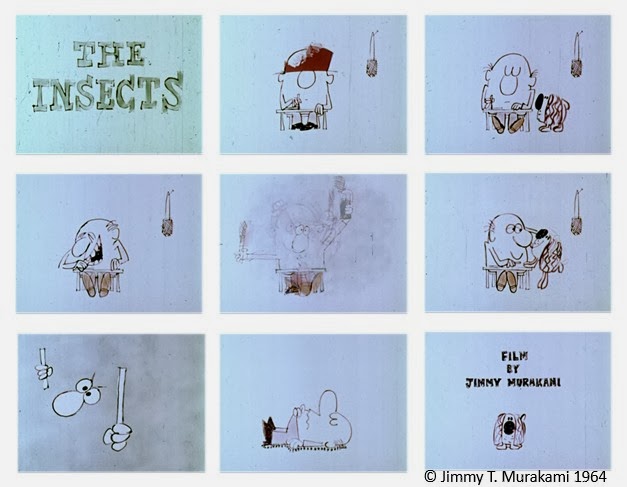 First we hear the sound of a pen furiously writing on paper, and section by section a writer in a tall red hat appears.  The writer is sitting at a desk, working away, in a space bare except for a fly swatter hanging on the wall beside him.  He stops to briefly stretch and check over his work, and is so wrapped up in his writing that he does not notice a moth land on his hat.  The moth devours his hat, revealing the writer’s bald head, and the moth flutters away laughing hysterically at his deed.  The writer appears unmoved, but he is actually waiting for his chance at revenge and as the moth flutters close to his foot, the writer boots him off-screen and gets back to work.

Unfortunately for the writer, this is only the first onslaught.   He gets attacked by a series of insects, with each episode more hilarious than the last.  He slaps himself in a fury to get rid of a fly.  Another fly drives him crazy by keeping just out of reach, going in his ear and just being generally annoying until he gets sprayed.  His dog vies for his attention and leaves him covered in itchy fleas.  His frustration impairs his writing and he balls up a page and throws it on the floor, only to have a group of ants pick up the ball of paper and play with it in front of his face.  He pounds the table to get rid of the ants and they land on his head – forming first a wig, then a funny moustache, then other amusing shapes as he tries in vain to spray them dead.  He fights them is a cloud of dust until he keels over and they carry him off.  The film ends with him calling meekly for help – his dog bounds into frame but seems more interested in his fleas.

I found myself doubled over with laughter while watching this film and wondered if it was inspired by Murakami's move to the UK.  My first encounter with insects indoors also occurred in the UK - in North America and Japan there are screens to keep insects out of homes/businesses so I was shocked to discover that windows in the UK had no screens.  Ditto the rest of Europe.  Here in Germany, the fight against insects indoors gets comically extreme in the late summer.  I am always bemused by the strange anti-insect machines the local bakery purchases to fight wasps on their desserts instead of just installing screens. . . especially as there is a small local business just down the street who advertises screens as part of their window business.  Murakami certainly captures the aggravation caused by insects perfectly. 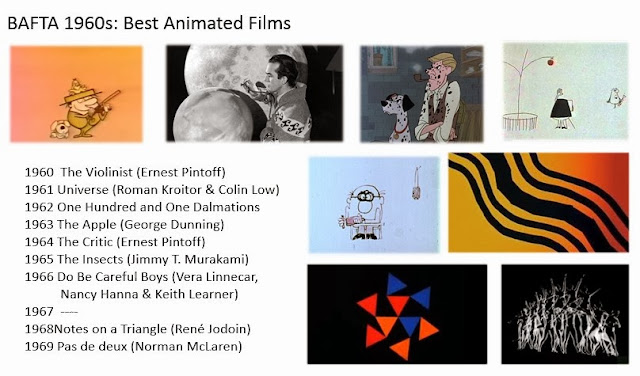 The Insects won the BAFTA for animation in 1965.  In recent years, big studio animated features have been winning the BAFTA for best animation.  In the 1960s, the awards were much more focused on innovation in animation.  Mel Brooks’ The Critic, directed by Murakami’s former boss Pintoff had won the previous year, and in 1963 George Dunning had won with The Apple.  Like The Apple, The Insects uses a simple line-drawing style and a clever concept to generate big laughs.  A classic of 1960s animated shorts.

The Insects can be found on the DVD Reflections of Jimmy T. Murakami.  Please support this independent artist by buying the DVD via his official website.