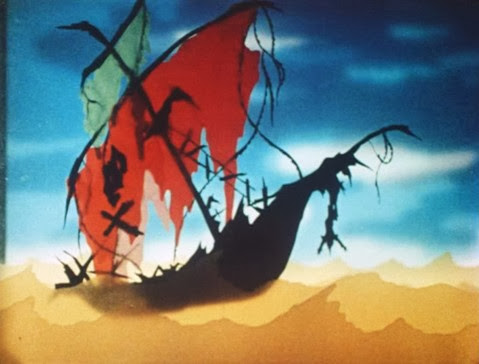 In September, the Tokyo International Film Festival unveiled digitally restored versions of 3 masterpieces by early anime pioneers Kenzō Masaoka and Noburō Ōfuji:  The Spider and the Tulip (1943), Whale (1952), and The Phantom Ship (幽霊船 / Yuureisen, 1956).  They also screened a newly discovered animated short by Ōfuji: Noroma na jiji (のろまな爺, 1924) – there is not an official English title yet, but I would suggest Foolish Old Man based upon plot descriptions I have read – and a test version of his incomplete final film Princess Kayuga (竹取物語/Taketori Monogatari, 1961).  In 1924 Ōfuji (大藤 信郎, 1900–1961)  had joined Sumikazu Film Studios (スミカズ映画創作社) where he was being mentored by Kōuchi Junichi (幸内純一, 1886-1970).   Noroma na jiji was Ōfuji’s first attempt at animation at Sumikazu.  The film was restored by IMAGICA West who transferred the film to black and white film stock in order to do the restoration, then tinted the film to match the original film (Source:  Kobe-eiga).  The films were introduced by Kōji Yamamura, who discussed the restoration process at the event.

I am looking forward to seeing these restored and rediscovered classics – particularly Whale and The Phantom Ship.  I have both of these film on the terrific DVD Animation Pioneers: Noburō Ōfuji Lofty Genius (アニメーションの先駆者 大藤信郎 孤高の天才, 2010). Although the transfer from film to DVD is well done, the film image had darkened with age and both films have the usual scratches and flecks that 35mm develop over time.  The films are silhouette animations which use coloured cellophane to add layers and visual interest.  With digital restoration, I imagine that the improved clarity of the coloured cellophane would look stunning.  Lotte Reiniger’s The Adventures of Prince Achmed (Die Abenteuer des Prinzen Achmed, 1926), which was a huge influence on Ōfuji, was digitally restored and released on Blu-ray/ DVD in the UK this past August.  Although this film is tinted rather than using coloured cellophane, the colours and detail in the digital restoration are simply spectacular. 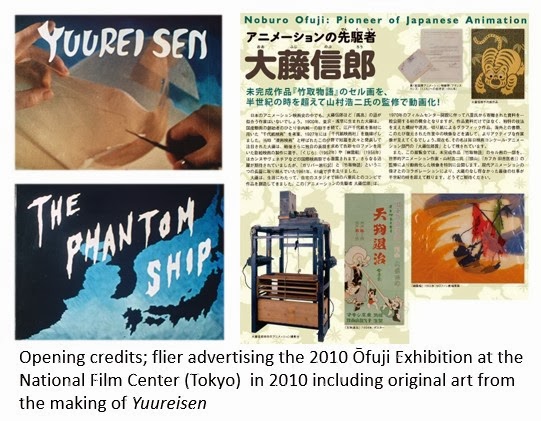 The Phantom Ship (幽霊船 / Yuureisen, 1956), a film both directed and written by Ōfuji, opens with tantalising glimpse at the master at work: Ōfuji’s hands cutting waves out of coloured cellophane.  The opening title sequence is written in English, which suggests that he made the film with his international audience in mind.  His films Taeisei Shakuson (大聖釈尊, 1948) and Whale screened at Cannes in 1952 and 1953 respectively in the official selection for short films.  Ōfuji’s name is Romanised as “Ohfuji” in the opening credits.  The renowned composer and professor of music Kōzaburō Hirai (平井康三郎, 1910-2002) composed the soundtrack.  There is no dialogue or narration in The Phantom Ship; instead, the story is told purely through visuals and music (choir, strings instruments, percussion).

During the opening credits, the camera rotates over a map of East Asia coming to stop over the Yellow Sea – the northern part of the East China Sea which lies between mainland China and the Korean Peninsula.  After a closer shot of the Yellow Sea, suggesting that this is where the story takes place, the opening sequence fades to black and opens with the parting of two wavelike silhouettes.   We see a rugged seascape which, combined with the low vocalising of the choir creates a feeling of unease.  Then, the shadow of a phantom ship appears.  The ship is a ruin, with its brightly coloured sails in tatters.  It is a ghastly scene.  One crew member hangs from his feet from the ship’s bow.  Another man stands impaled to the mast by a sword.  A pirate symbol seems to have been scrawled upon one of the tattered sails.  After a montage of the corpses, the camera returns to the pirate symbol.  The wordless chorus increases in volume and pitch as the boat magically comes back to life. The sails mend themselves and the crew of noblemen, armed with swords, also magically return to their formal selves.  They thrash their swords and look ready for a fight.

The scene shifts to a more peaceful ship filled with elegant figures.  Women dance around a smiling figure of a Buddha. Some of the dancing scenes are set against a kaleidoscope of whirling colours.  A sentry walks the deck alert to any trouble.  Just as a pair of lovers look as though they are about to embrace, the phantom ship appears and interrupts their peace. The trouble begins with the shot of a cannon and soon the phantom pirates are invading the peaceful ship attacking both men and women indiscriminately.  Although the peaceful ship seems overwhelmed, they put up a valiant fight, with even the elegantly dressed ladies picking up swords and duelling with the invaders.  The pirates toss people overboard and set the ship alight.  The phantom pirate ship then quietly sails away. 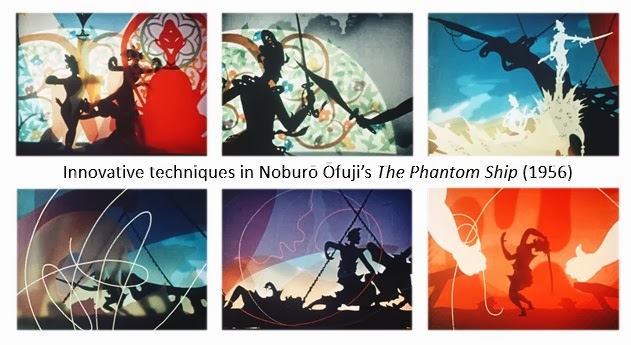 In the next scene snow is falling, then a short montage suggests a shift in time from winter into the spring.  A white phantom ship approaches the pirate phantom ship.  The pirates shoot at it in vain, then shake with fear as the white phantom sailor approaches, his rapier brandished high.  Behind him sits a white lady.  It is the ghosts of the pirates’ noble victims.  The white phantoms now seek their revenge, in a marvelous sequence that uses an experimental technique of overlaying animated swirling lines and other shapes.  There are also overlaid images of white feet stomping on the pirates and hand prints slapping at them.  It is a nightmare sequence complete with images resembling dripping blood.  Even the waves seem determined to grab the pirates and dash them into the sea.  The white phantoms do not rest until the magic is undone and the pirates return to their original state as corpses on a ruin of a pirate ship.

It is truly a spectacular film, and one of the top animated shorts of 1957.  At the time, there were no established international film festivals for animation – the oldest such festival, Annecy, would get off the ground in 1960.  The Oscars at this time were giving awards to “cartoons” – i.e. it was mainly a competition between Disney, Warner Bros., MGM, and UPA – Norman McLaren famously won an Oscar for Neighbours (1952) in 1953, but it was for Best Documentary Short because pixilation/stop motion techniques did not qualify as “cartoon” (i.e. drawn) animation.  Thus other animation techniques at international festivals like Berlin and Cannes were lumped into vague categories such as “Culture Films and Documentary”.

Many books and articles claim that The Phantom Ship won the “Grand Prix” at the 17th Venice Film Festival in 1956 which I have always found suspicious because of its wording.  To begin with, the Venice Film Festival’s grand prix is not called “Grand Prix”, but the Golden Lion. Secondly, no Golden Lion was awarded in 1956. Jury members were divided in opinion between Kon Ichikawa’s Harp of Burma and Juan Antonio Bardem’s Calle Mayor and so in the end did not give the award to anyone. The jury president that year was John Grierson (UK) with jury members including André Bazin (France), G.B. Cavallaro (Italy), Friedrich Ermler (USSR), James Quinn (UK), Kiyohiko Ushihara (Japan), and Luchino Visconti (Italy).  This was reported in English by Fred Roos in his article “Venice Film Festival, 1956.” [The Quarterly of Film Radio and Television, 11.3 (Spring 1957)]  The Special Jury Prize and Silver Lion were also not awarded in 1956.  But then, these aforementioned  prizes are also intended for feature films.  In the 1950s, short films received less press than they do today for the prizes that they receive so it is difficult to dig up spectator's impressions of the films.  Even in the QFRV, Roos only mentions that 14 prizes were awarded to documentary and children films, but he does not give their titles.  He praises the Chinese and the Czechs as being “particularly outstanding in their use of puppets and animation” (253), but he does not mention Noburō Ōfuji at all.  Digging through French film journals in the library of the Deutsches Filminstitut in Frankfurt, I have also been unable to find information about reaction to The Phantom Ship at Venice in 1956. 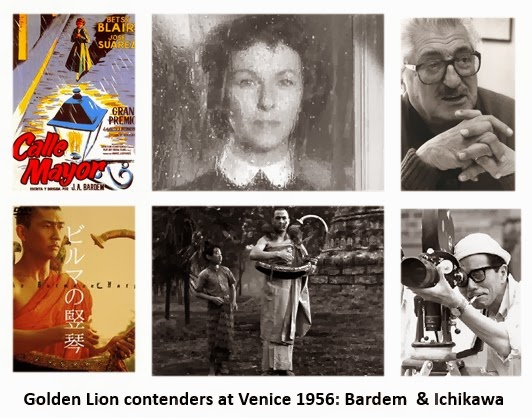 So I dug deeper and found that according to the Venice Film Festival’s digital archives, The Phantom Ship was awarded an Honorable Mention for Experimental Film (Menzione per i film sperimentali).  This is not the grand prix, but a runner-up to Peter Foldes’s animated short film, A Short Vision, which won the award for Best Experimental Film (Premio per il miglior film sperimentale).  Foldes’s anti-Atom bomb film, which the BFI calls “one of the most influential British animated films ever made, had caused a huge sensation when it screened on May 27, 1956 on the popular variety show The Ed Sullivan Show in the US. 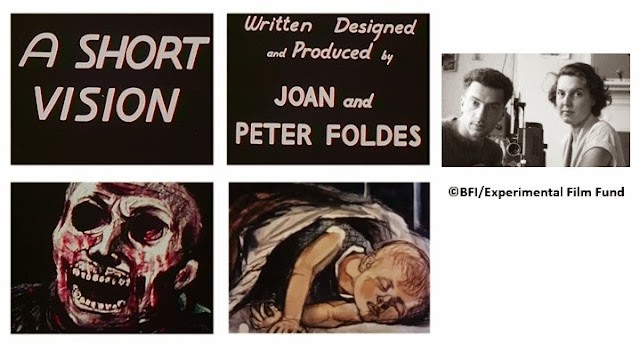 I think that the mistaken attribution of a grand prix at Venice to Ōfuji likely came from an error of translation somewhere along the line, and the difficulty of checking the name of the award without access to physical archives.  The Biennale’s online digital archive only became available in recent years and is currently only available in Italian, so it was difficult to check without going to an archive.  Also, the multiple spellings of Ōfuji’s name in the Latin alphabet (Ofuji, Ohfuji, Oofuji, etc.) make searches of online databases challenging.  In the trailer released by the NFC in September for the screening event at TIFF (Tokyo), the award Ōfuji received as Tokubetsushō (特別賞) – lit. special award – which matches the Italian well.

The Phantom Ship is indisputably a special film – one of the best animated shorts to come out of Japan in the 1950s, and when one takes into account Ōfuji’s other silhouette animations, he ranks as one of the top silhouette animators of all time alongside Lotte Reiniger, Bruno J. Böttge, and Michel Ocelot.  While pouring through old journals in the library, I discovered a forgotten nugget of information: The Phantom Ship was screened in the UK in 1957.  According to Bernard Orna, writing in the now defunct journal Films and Filming, The Phantom Ship was one of the films that at the First International Animated Film Festival, nicknamed the “Festival of Cartoons”, at the National Film Theatre (now BFI Southbank) in London.  He describes Ōfuji’s “open[ing] the door on an exciting variant of a kind of film known to us otherwise through the work of Lotte Reiniger.” (3.7 April 1957, p.33).  The door has indeed been opened, and I do hope that more young animators – like Aki Kono in her film Promises – choose to follow Ōfuji’s lead and experiment with the medium of silhouette animation.