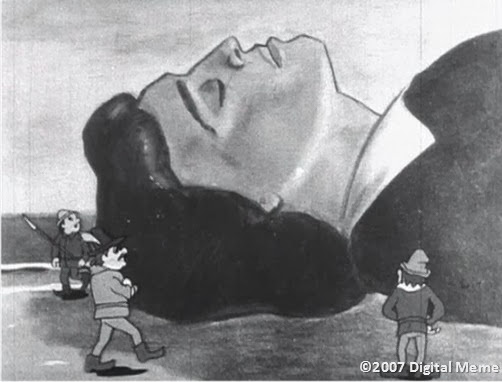 The Fleischer Brothers’ Gulliver’s Travels (ガリバー旅行記), the second feature-length cel animation ever made, was a big success when it premiered just before Christmas in 1939.  Because of the war, it did not reach Japan until 1948 where it is believed to have been the inspiration behind Kindai Eiga-sha’s unusual 1950 animated short Gulliver’s Great Activities (ガリヴァー奮闘記/Gulliver Funtōki, 1950).

Japanese companies had long before the war already cottoned on to the fact that animation was a great way to promote products.  There were the record talkies which used animation to promote popular music in the 1920s and early 1930s.  One record talkie that I know of, Chameko’s Day (1931), even additionally features Lion Toothpaste product placement. 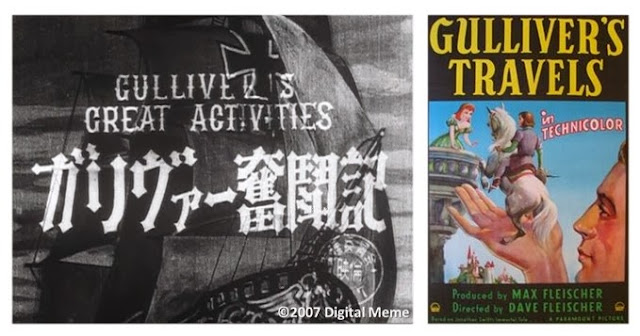 Gulliver’s Great Activities was funded by the Japan’s National Tax Agency (国税庁) with the aim of promoting the payment of taxes by the general public.  I do not know how widely the film was distributed, nor how successful it was in motivating people to pay their taxes.  From an early 21st century perspective, the efforts seem pretty ham-fisted and they amuse me greatly. 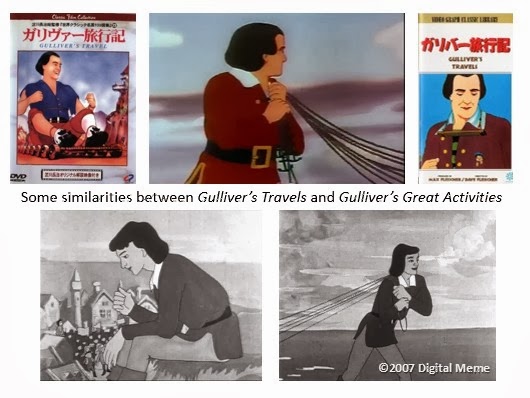 With the landscape, town, and character designs, the filmmakers have done a reasonable job of creating an 18th century European environment.  Almost all adaptations of Gulliver’s Travels play fast and loose with the original plot and settings – the Fleischer Brothers’ film was only very tenuously based on the opening chapter (A Voyage to Lilliput) of the original novel, and Gulliver’s Great Activities seems loosely based on the 1939 animation – an adaptation of an adaptation of sorts.  While Fleischers’ film was definitely marked with their in-house “cartoon”- style, the Kindai Eiga-sha film seems more based on European illustrations and paintings. 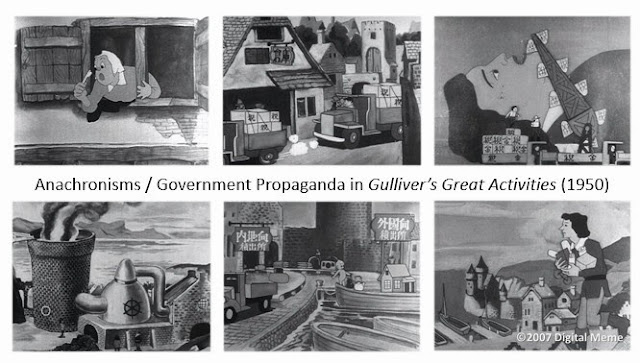 That being said, the anachronisms are startling. The first appears in the opening credits. The ship that presumably Gulliver is travelling on when he gets shipwrecked has a prominent iron cross on its sail.  This is indeed surprising because the iron cross has for centuries been the symbol of the German military and its antecedents.  In the original novel, Gulliver sets sail from Bristol with a Captain William Prichard, so it would be much more likely that she ship's sails bore the cross of St. George, if it had a symbol on it at all.

The next anachronism that I spotted occurs when the townsfolk have been informed that a giant has landed on the beach.  One woman comes to her window brushing her teeth with a toothbrush. Now, Jonathan Swift was indeed obsessed with hygiene and the theme of cleanliness comes up often in Gulliver’s Travels, but not toothbrushing.  The toothbrush, which has been around in various forms since ancient times, did not really take off in England until William Addis invented the modern toothbrush in 1780.

From here on in, the anachronisms demonstrate that there was no concern for historical accuracy – the anachronism are there in aid of the government propaganda.  Gulliver, it seems, is a metaphor for the ways in which the government -using funds raised by taxes - can aid the community.  After initially tying Gulliver up, a huge storm brings flooding and the Lilliputians decide that this giant could be useful in repairing and preventing flood damage.  They send motorized trucks with goods from the government stores to feed and revive Gulliver.  After building dykes, he then aids big industry (a smelter), followed by trade and commerce.

In his final act of heroism, Gulliver aids in putting out a fire that threatens to burn down the town.  This sequence is particularly amusing because despite all of the anachronistic imagery of modern technology, the town has only a manually operated water pump.  This is just one of several moments in the film designed to provoke laughs from the intended audience – in this case, one of the men gets hosed in the face.  I was laughing for an entirely different reason.

Directors Tokio Kuroda (黒田外喜男) and Shigeyuki Ogawa (小沢重行) have used a mix of cutouts and cel animation, which causes some continuity problems between cuts.  The film looks amateurish compared to the Fleischer Brothers’ Gulliver’s Travels, but then they only have a minuscule staff and much less experience when compared to the more technologically advanced Fleischer Studios.  It is by no means a classic, but I certainly enjoyed watching it.  This film appears on Disc 4 of Digital Meme’s Japanese Anime Classic Collection.