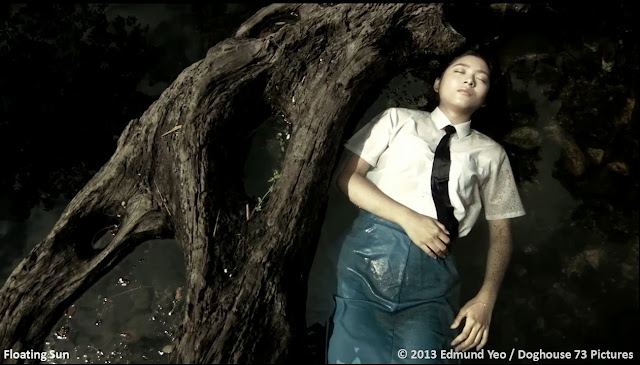 Floating Sun (幻日, 2013) is a bit of a departure for Tokyo-based Malaysian director Edmund Yeo into the horror genre.  This short film is his contribution to Hungry Ghost Festival: 3 Doors of Horrors (鬼節:三重門, 2013), a 45-minute horror omnibus film produced by prolific Malaysian filmmaker James Lee for his indie production company Doghouse 73 Pictures.  The film premiered on Youtube on the 17th of August.  The omnibus, which was designed to showcase young Malaysian directors, also includes Leroy Low’s I Miss You Two and Ng Ken Kin’s Horror Mission.  This review is of the 20 minute director’s cut of Floating Sun considered independently of the omnibus as a standalone short film. 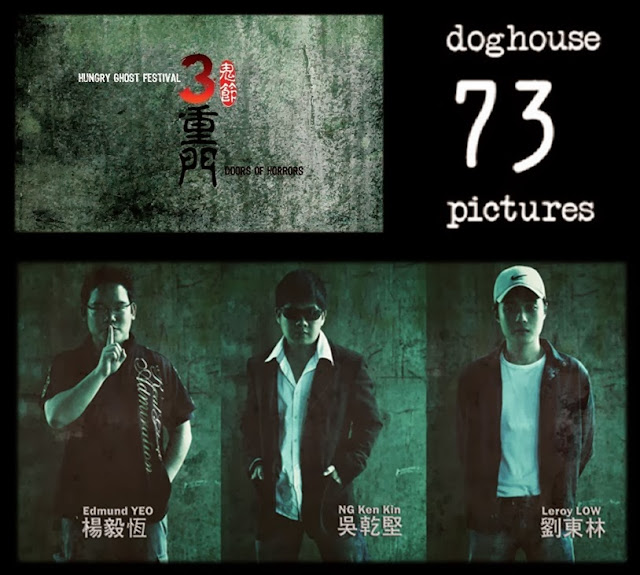 The plot of Floating Sun comes from a short story by author and poet Kanai Mieko (金井美恵子, b. 1947).  According to Yeo’s blog Swifty, Writing, he happened upon Mieko’s collection of short stories The Word Book at the Aoyama Book Center in Roppongi.  Her story “The Moon” was the inspiration behind his beautiful short Last Fragments of Winter (2011), while Floating Sun is based on the story “The Boundary Line”, about the corpse of a woman who drowned.

As with many Edmund Yeo films, Floating Sun blurs the lines between past and present, real and imagined.  A young novelist, Fiona Yang (Emily Lim), is writing a story based upon the unusual circumstances surrounding the death of her teenaged classmate Chen Xiao Hui (Candy Lee) many years ago. Chen Xiao Hui was found floating on her back in the river by a security officer (Azman Hassan), and the events continue to affect all those involved.  Since beginning to write the story, Fiona has been haunted by images of Chen Xiao Hui’s corpse floating in the river.  A series of strange events also begin to disturb her and her young daughter Teng (Regina Wong) in the apartment that they share.  The disquieting events seem to be connected not only to the haunting presence of the spirit of Chen Xiao Hui but also to possible guilt surrounding Fiona’s affair with married man Wai Loon (Steve Yap) – but this interpretation is my own as the circumstances are deliberately left vague. 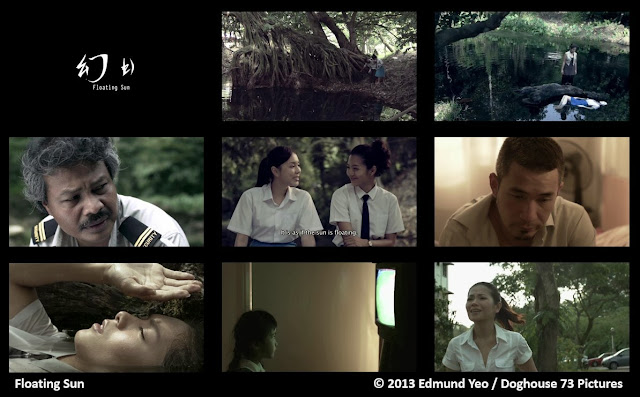 It turns out that Fiona was the last person to see Chen Xiao Hui alive, a fact that she downplays as being unimportant because they were merely classmates not close friends.  A flashback reveals that Fiona recalls sitting with Chen Xiao Hui at the river and saying: “Do you know, if you look at the sun from underneath the water, it is as if the sun is floating.  It’s a lovely sight, but sad at the same time.”  These comments suggest that Chen Xiao Hui’s death may have been an accident.

The location for the river scenes really makes the film.  Chen Xiao Hui lies in the water as if being embraced by the root of a giant tree.  This tree was truly a great find for the film for its numerous roots are not only poetically beautiful, but add symbolic weight to the film: the roots behind the events in this vignette are many, but Edmund Yeo leaves us only a few tantalizing clues and leaves it to our imaginations to fill in the blanks.   It’s an atmospheric and suspenseful tale that leaves us wanting to know more about these characters.

You can watch Floating Sun as part of the Hungry Ghost Festival: 3 Doors of Horrors (鬼節:三重門, 2013) on Youtube.