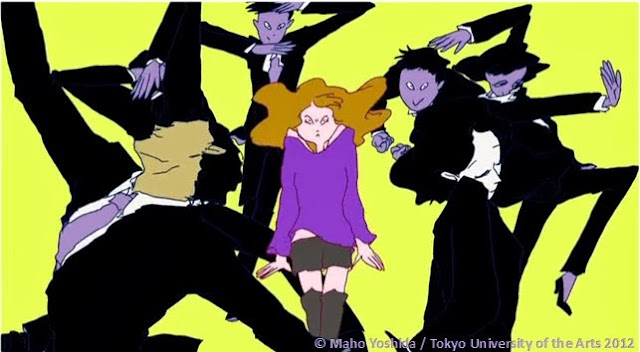 The final year of university in Japan is quite fraught because of a tradition known as Shūkatsu Kyōsōkyoku: an intense recruiting process by corporations keen to scoop up the top graduates.  The pressure to find a job upon graduation is much greater in Japan than anywhere else I have lived because there is a general consensus that if you don’t get hired straight out of college, you will have spoiled your chances for climbing the corporate ladder and may find yourself becoming a freeter (underemployed/freelancer).

Another major difference that I noticed between Canada and Japan in particular was that whereas Canadian companies highly value creativity, individuality, and a “go-getter” attitude in new recruits, in Japan the emphasis is much more on academic performance and the recruit’s ability to fit in with the corporate identity.  It’s more than just the “team player” mentality promoted by many Canadian corporations because you are having to demonstrate that you are prepared to obsequiously toe the line of corporate hierarchy.  Up-and-coming young animator Maho Yoshida (吉田まほ, b.1986) depicts this recruitment process beautifully in her graduate film for Tokyo University of the Arts (Geidai)’s animation programme: Recruit Rhapsody (就活狂想曲/Shūkatsu Kyōsōkyoku, 2012). 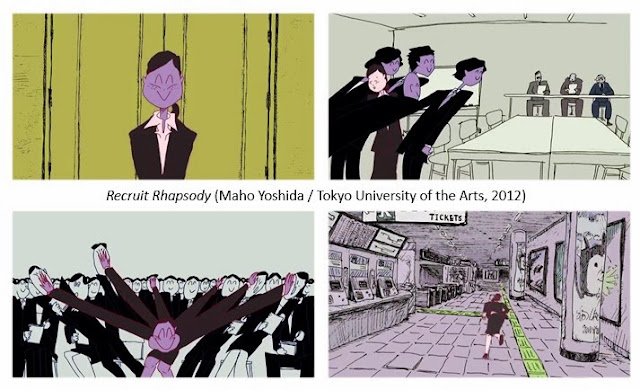 A young modern woman – who we find out in the end credits is the animator herself – is fiddling on her smartphone during a lecture.  She is so preoccupied with her smartphone that she doesn’t notice her friends checking their watches.  As they leave the building together, her friends check their watches again and turn their backs on the bubbly young woman.  Before her incredulous eyes, the woman’s friends transform from unique individuals into wannabe office workers in suits.  There is a wonderful moment in which they strike poses against a yellow background as if they are about to break into a dance number from West Side Story.

The young woman reluctantly sheds her long blonde hair, make-up, and colourful clothes for a dowdy corporate look and rushes off to join the crowds of recruits trying to get onto the corporate ladder.  They slither into a job fair like a festival dragon and applaud the corporate recruiters and bow their heads in a manner reminiscent of a totalitarian regime cowing the masses.  It is a terrific animated short, which any job hunter can identify with: from the companies overselling their images to the phoneys vying for the same job as you to the interminably long hours waiting by your smartphone for that job offer that never comes.  We all recognize that feeling of selling your soul to the devil just to get your foot in the door. 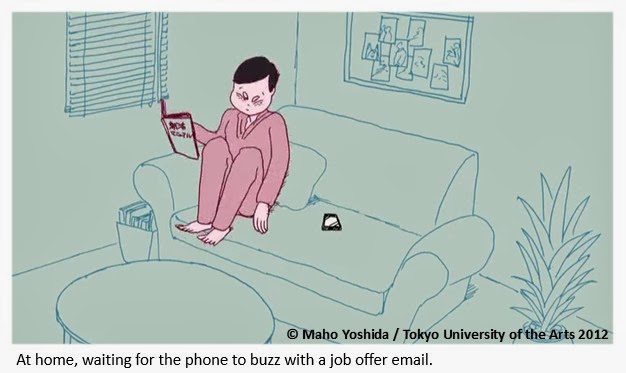 What transforms this film from great to pure genius is the use of music.  Composed by Yukiko Yoden from Geidai’s music programme, the music is reminded me of George Geshwin’s Rhapsody in Blue (1924) in its spirit and liveliness.  .   .  and of course, in its use of piano with an ensemble.  Kudos to Shizuka Shimoyama on piano, Makiko Umchara on violin and Saeko Tominaga on violoncello for their engaging performances. Maho Yoshida has clearly composed her images with the intended music in mind for the movement and music work very much in harmony with each other.  It never ceases to amaze me how the graduates of the Geidai programme have attained such a high level of skill at such a young age:  Yoshida’s scene transitions and changes in perspective are innovative and beautifully done. 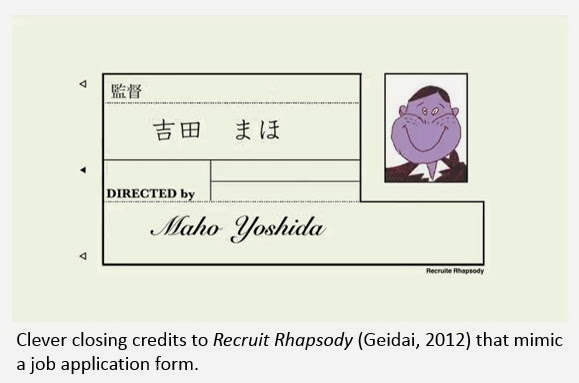 The film was produced by Kōji Yamamura and it made the Jury Selection in the Animation Division of the 2012 Japan Media Arts Festival and has appeared at other festivals.  I saw the film as part of the Geidai screening at Nippon Connection 2013. You can see a lower resolution release of the film (no subs - but they are not really needed) on Youtube --- be sure to wait until after the end credits to catch the true end of the film.  It became a viral hit when it came online and I suspect that every spring when the recruitment season heats up loads of young recruits will be sharing this video again.

Posted by Cathy Munroe Hotes at 7:56 am