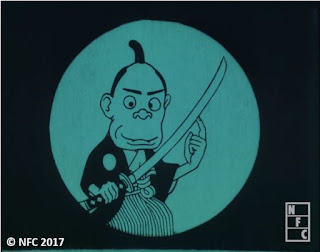 Japan is celebrating the centenary of anime this year. Due to the paucity of early cinema records in Japan there is much debate as to when exactly animation was first publicly screened in the country. However, we do know that the 1910s saw screenings of foreign works by Émile Cohl, James Stuart Blackton, James Randolph Bray, and Raoul Barré. There is also evidence that many people were experimenting with the animation medium before 1917, but it was the year that the first studio was organised to make animation for public screenings.

The cartoonists Ōten Shimokawa (下川凹天, 1892-1973), Seitarō Kitayama (北山清太郎, 1888-1945), and Jun’ichi Kōuchi (幸内純一, 1886-1970) produced at least 20 short animated films in 1917. The earliest of these is generally thought to have been Shimokawa’s The Story of the Concierge Mukuzo Imokawa (芋川椋三玄関番之巻, 1917), but there is evidence that there may have been an earlier work. You can read “Some remarks on the first Japanese animation films in 1917” by Frederick S. Litten to learn what is known about this time period.

What is clear; however, is that almost all the Japanese animation films from the 1910s have been lost. Jun’ichi Kōuchi’s The Dull Sword (なまくら刀 / Namakura Gatana, 1917), also known as The Sword of Hanawa Hekonai (塙凹内名刀之巻 / Hanawa Hekonai meitō no maki), is the earliest known extant work. The Dull Sword and Kitayama’s Urashima Taro (1918) were miraculously discovered in an Osaka antique shop in 2008 (source). The film originally debuted on 30th of June 1917.

Watch a news item on the discovery:

A one-reel silent film, The Dull Sword was digitally restored and can be screened on the National Film Centre’s film archive website with subtitles by Dean Shimauchi.

The film has a couple of title cards, but much of the apparent dialogue is un-titled. It is likely that these segments of dialogue were filled in by a benshi, or film narrator, as was standard practice in Japanese silent cinema. Watching the film completely silent on the NFC archive website, without the comic interpretation of a benshi, means that the full comic impact of the film is greatly reduced. One of the title cards is actually on its side (90° clockwise). The film was found with this splicing error and left as it was found by the restoration team.

The Dull Sword is a slapstick comedy, which was a popular genre of the silent period. It is likely Kōuchi and his early animation peers would have been familiar with imported comedies of the day such as the films of “the first international movie star” Max Linder of France, and American slapsticks such as those of Fatty Arbuckle, The Keystone Cops (1912-1917), and Charlie Chaplin. There are also elements of slapstick in many Japanese theatrical traditions such as manzai (漫才) and kyōgen (狂言). Add to the mix that Kōuchi was already an established mangaka and caricaturist when he made The Dull Sword, comedy would have come naturally to him.

The opening title card, tinted yellow, immediately sets the scene as a jidaigeki with the profile of a samurai and a bent sword. The first section of the film is tinted a dark cyan. A samurai appears in an iris shot examining his sword and testing it for sharpness. His eyes roll comically and his sword overlaps the iris matte in a cinematic visual gag. He cuts his finger on the sword then takes it to the swordsmith “Dull Smith”. The dialogue between the swordsmith and the samurai does not have title cards, but it is clearly humorous in nature with much eye-rolling from both men. There is a slapstick routine of the samurai trying and failing to sheath his sword. Once the sword is finally sheathed, the samurai pays the swordsmith and leaves.

In the next scene, the samurai is walking along the riverbank across from a large town. He gets out his sword and examines it. A title card reveals his desire to try out the sword. The film cuts to a bald, blind man with a cane playing a flute next to a tree. The samurai approaches him from behind. A yellow-tinted title card reveals that the samurai sees the blind man as a possible person to test his sword out on. He says something (presumably threatening judging from his facial expression) to the blind man. The blind man surprises the samurai by jumping up and kicking him in the face with his geta-clad feet.

The remainder of the film is tinted yellow. The style is also different with silhouette figures instead of detailed caricatures. A traveller with his luggage on a stick carried over his shoulder is running through the forest and encounters the samurai. The samurai tries to attack him, but the traveller outwits him, hitting him on the head with his stick. The traveller runs away as the samurai struggles to raise his head. Via a speech bubble, the samurai accuses the traveller of being a murderer. The samurai tries to stagger off using his sword as a cane, but it breaks and he falls on his face. He throws the useless sword away. He exits frame left and the film concludes with a company logo reading Y.N. & Co. I am not sure what the Y.N. stands for as Kōuchi made the film for the short-lived company Kobayashi Shōkai (小林商会, 1914-17) run by Kisaburō Kobayashi (小林 喜三郎, 1880-1961)

The film was transferred to digital format at 16 fps. There were many frames missing from the two film fragments (the cyan-tinted fragment and the yellow-tinted fragment) that had to be compensated for during the film restoration. The final restoration consists of a total of 3,180 frames. For such an early work, the animation is done quite well. Much of the cyan fragment has been hand drawn with cutouts used to save money and celluloid. I am not sure why the film switches to silhouette for the second half. The reason may be budgetary rather than stylistic. My own personal view is that such a short film would have been stronger if it had stuck to one style throughout.

The most interesting thing about The Dull Sword is its use of a Japanese setting and subject matter. According to Jonathan Clements, the film received praise at the time for doing so (Anime: A History, p. 29). Before the discovery of these earliest works, we only had examples of anime from the 1920s-1940s which demonstrated the influence of popular American character design like Mickey Mouse, Popeye, Betty Boop, and Felix the Cat. This earliest extant anime has been drawn in a caricature style typical of the 1910s and the character design is such a contrast with today’s manga and anime styles. It is a wonderful glimpse into a film culture that we know so little about, due to the destruction wreaked by the Great Kantō earthquake if 1923, the firebombing of Tokyo, the flammability of early film stock, and the general neglect of early films after their initial screening runs. I hope one day to see this film interpreted by a benshi performance in order to get the complete cinematic experience.
Cathy Munroe Hotes 2017
Posted by Tanuki Press at 7:17 pm