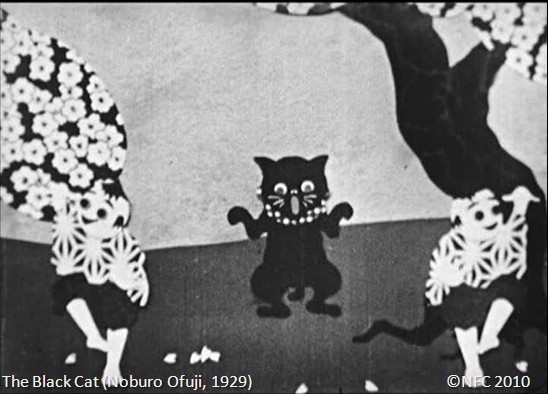 The children’s song The Black Cat was written by Kōka Sassa (佐々紅華, 1886-1961), husband of the popular Asakusa Opera singer Ruby Takai (高井 ルビー, 1904-unknown), with lyrics by Otowa Shigure (時雨 音羽, 1899-1980).  It was released by Victor Records and features the vocal talent of child star Hideko Hirai (平井 英子, b. 1918).  Hideko Hirai also features with Ruby Takai in the Kōka Sassa hit Chameko’s Day, which was made into an animation directed by Kiyoshi Nishikura (see review) in 1931. 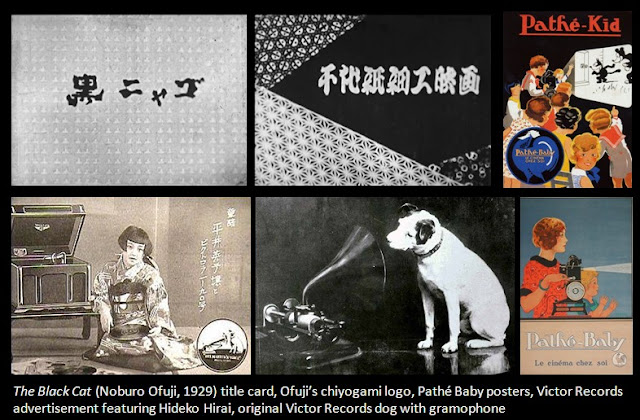 On the other side of the Pacific, Walt Disney had made splash a year earlier with the release of Steamboat Willie (1928) which he co-directed with Ub Iwerks.  While not the first animated film to have a synchronous soundtrack, Steamboat Willie was certainly the most successful and marked the debut of the iconic Mickey Mouse.  Sound on film technology was much slower to come to Japan – not only because of a lack of technology but because of the tenacity of the benshi tradition.  The first animated film with a synchronous soundtrack would not be made in Japan until 1933: Kenzō Masaoka’s lost film The World of Power and Women (Chikara to Onna no Yo no Naka).  The first step towards sound films in Japan were the record talkies, and The Black Cat is believed to be the first of its kind.

The film is directed and animated by the legendary Noburo Ōfuji (大藤 信郎, 1900-61) in his signature chiyogami cutout animation style (cutouts using traditional Japanese paper).  Due to the expense and relative scarcity of celluloid in Japan in this period, cutouts were a common method for making animated films.  It was shot on 9.5mm film on a Pathé Baby.   I watched the film on the Kinokuniya DVD Ōfuji Noburō: Kūkō no Tensai (2010). The film was digitized by the National Film Center and synchronized with the original Victor record.  Both the soundtrack and the film show their age with much popping and scratching, but as so many films from this era have been lost we are lucky that the film survives in a relatively complete condition. 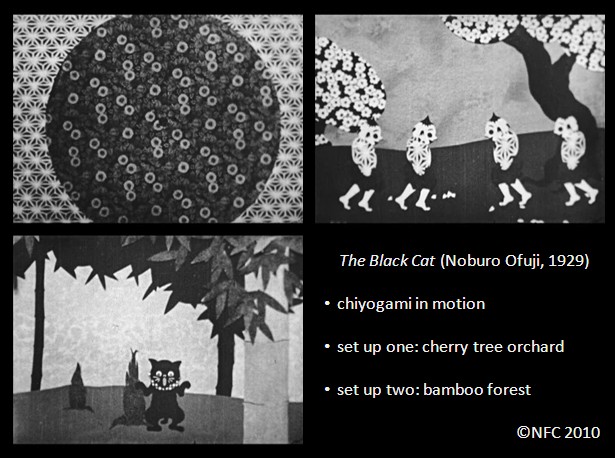 The opening shot is of chiyogami cherry blossom trees shedding a few petals.  Some boys walk along and sing of their desire to have a black cat with a red collar who dances.  A black cat appears and sings and dances for them.  The cat then introduces her brother, a tabby cat, who also sings and dances for them.  The boys also join in with the dancing and singing.  As with any successful children’s song, The Black Cat has a catchy tune and is repetitive.  It alternates between song and dialogue.  One can imagine children of the era mimicking the cat’s dance, not to mention the cry of the cat as she sings.  The bouncy rhythm of the song would also encourage clapping.  The second refrain might have inspired the children to leap like the cat’s tiger ancestors, while the third refrain might have gotten a bit wild with children pretending to throw a mouse just like the cat.

The character movement is less complex than later Ōfuji films, but it is still very charming.  Ōfuji uses two main set-ups for the piece: a cherry tree orchard and a bamboo forest.  Some of the more complicated sequences involve spinning chiyogami paper and the “tracking” shots of characters walking.  I put “tracking” in brackets because it is not actually the camera that is moving, but the paper under the camera between shots – but this animation technique creates the illusion that the camera is moving over the scene.  As is typical for films of this era, mattes are used in lieu of close-ups.  There was no such thing as a zoom lens in the 1920s and it would have been more cost effective / time efficient to matte the image than to change the camera set-up for a close-up. All in all, it is a delightful piece of early animation history.

In addition to the DVD Ōfuji Noburō: Kūkō no Tensai, The Black Cat appears on the Digital Meme Box Set Japanese Anime Classic Collection.  A sample of the film with English subs can be screened on Crunchyroll.