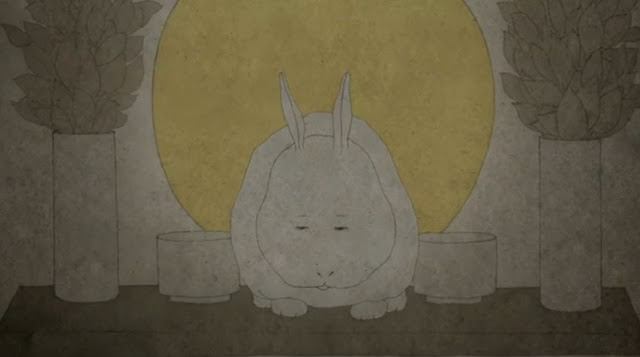 It was been a great week for Japanese independent animation with Atsushi Wada picking up the Silver Bear at the Berlinale for Best Short Film for his latest work The Great Rabbit (グレットラビット, 2012) which was produced by the French company Sacrebleu Productions.  The Jury commented:

This dreamlike film uses a unique, surreal language to tickle our unconscious while showing us the confusion of the modern world in animated form. Using a delicate hand drawn style, Atsushi Wada decodes reality with absurd sequences of characters caught in time. (source)

The Japan Times, who have a wonderful photograph of a smiling Wada accepting the award, quoted Wada as saying “I am proud to win this award. I feel relieved because I used to think my works were rather hard to understand.”

The film has been hand drawn frame-by-frame on paper in Wada’s signature style, which you can learn more about in my November 2010 interview with him or in my review of his CALF DVD Atsushi Wada Works 2002-2010.

Many top animators have won the Silver Bear in the past including Norman McLaren and Evelyn Lambart in 1956 for Rhythmetic, Paul Driessen in 1981 for On Land, at Sea and in the Air, and Ishu Patel in 1985 for Paradise.

Here is the official trailer for The Great Rabbit:

Isamu Hirabayashi’s beautiful animated short 663114 (2011) also received a nod at the Berlinale in the Generation Section in which the jury is made up of eleven children and seven teenagers.  They said of 663114:

Visuals and sound melded together flawlessly to create a philosophical and layered masterpiece. The director conveys his message, beyond all conventions. Through a simple metaphor he portrays the survival of a culture, even in the face of catastrophe. (source)

Hirabayashi used the platform to remind people around the world of the seriousness of the crisis in Fukushima: "Children are being exposed to dangerous radioactivity a year after the earthquake. It is our responsibility as Japanese adults to protect the children."

I am proud to announce that I am curating the animation selection for Nippon Connection this year.  Atsushi Wada will be our special guest and we will have the honour of screening Hirabayashi’s 663114.