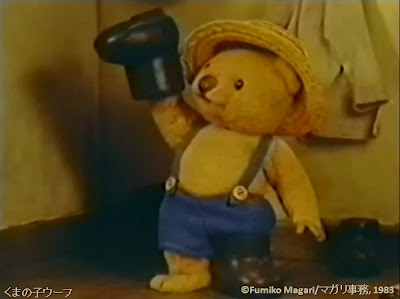 The Little Bear Oof (くまの子ウーフ/Kuma no ko Ūfu, 1983) is a stop motion short animation directed and animated by Fumiko Magari (真賀里文子).  Magari got her start in stop motion working under the animation pioneer Tadahito Mochinaga at MOM Productions on the Rankin/Bass series and specials.  She also worked on a number of notable projects for Tadanari Okamoto including A Wonderful Medicine (1965), Welcome, Alien (1966), The Flower and the Mole (1970), Chikotan (1971), and The Monkey and the Crab (1972).  In addition to her work for animated films, Magari has made animation for television, and according to her official profile, has made over a thousand commercials (and counting!).  She has her own animation studio Magari Jimusho (Magari Office) and teaches at the Laputa Art Animation School.  Be sure to check out an insightful interview with this pioneer of Japanese stop motion animation in the Februrary 2011 issue of Stop Motion Magazine.

The Little Bear Oof is based on the children’s storybook by celebrated author Toshiko Kanzawa (神沢利子, b. 1924) and was made available on Youtube by Magari Jimusho last spring.  It is the tale of an imaginative young bear who takes pleasure, as children do, in the wonders of nature (admiring large trees, chasing honey bees) and the simple pleasure of life (honey on toast, picking flowers with his rabbit friend Mimi-chan).  He is concerned about the welfare of others – in an amusing sequence one would never see in an American animation, he spontaneously relieves himself and then apologizes when he realizes he is peeing on ants.

The story is episodic, following a typical day in the life of a child living in the countryside.  Little lessons are imparted along the way – like washing one’s hands before eating – but on the whole the film is just a slice of life tale of an idyllic childhood.  The settings are quaint – woodcut furniture and a wood-burning fire – all very reminiscent of the world of Beatrix Potter.  During the course of the film, Oof (Ūfu) learns from a chicken where eggs come from.  The only conflict in the film comes in the form of a mischievous fox who distracts Oof by telling him that he is made of pee (complete with an flashback to Oof peeing on the ants) and steals Oof’s egg.  Oof chases after him, but fails to get the egg back and cuts his foot on something sharp.  He sits down to cry, but soon recovers from this incident and there is a wonderful sequence of him rolling down the hill and giggling all the while.  The film ends with Oof’s father coming home and Oof telling him that he’s realized that he’s not made of pee, but made of himself.

It is a sweet tale that will captivate preschoolers as it is written using the logic of children in this age group: a time when the world around us is a mystery waiting to be discovered and understood.  The puppets are lovely and resemble children’s toys.  They were lovingly handcrafted by Sumiko Hosada (保坂純子, b. 1930), who also worked with Magari at MOM Pro and Okamoto’s studio Echo Pro.  Hosada also teaches puppet design at Laputa.  The art director Hiromi Wakasa (若佐ひろみ) is famous for her work on many Okamoto and Kihachirō Kawamoto productions.  The icing on the cake are the children’s songs written and performed by Tomoya Takaishi (高石ともや) and his folk band The Natarsha Seven (ザ・ナターシャー・セブン).


Catherine Munroe Hotes 2012
Watch for yourself (in 2 parts):