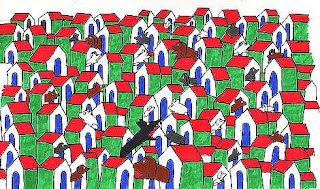 Animator and artist Yoji Kuri (久里洋二, b. 1928) is one of the founding fathers of Japan’s art animation scene. Along with graphic designer and ad-man Ryohei Yanagihara (柳原良平, b. 1931) and renowned book cover designer Hiroshi Manabe (真鍋博, 1932-2000) Kuri formed the Animation Sannin no Kai (Animation Group of Three) in 1960. In doing so, the three animators were following in the footsteps of the Sannin no Kai composers of the 1950s (Yasushi Akutagawa, Ikuma Dan & Toshiro Mayuzumi), who had banded together in order to stage performances of their avant-garde style of music together. The Animation Sannin no Kai put on three events in which they showcased their work in November 1960, December 1962, and April 1963. From 1964 this event was expanded into a wider Animation Festival, which during its annual run until 1971 showcased the experimental fare of such artists as Taku Furukawa, Sadao Tsukioka, Goro Sugimoto, Keiichi Tanaami, and even Osamu Tezuka. (for more on these events see anipages)
Of the original Animation Sannin no Kai, Kuri was the only artist to make a career out of animation. Throughout the 1960s, his films appeared at international festivals throughout Europe and North America. His 1962 film Clap Vocalism (Ningen Doubutsuen, 3’), with a score by Toru Takemitsu (famed for his work on Akira Kurosawa’s films), won the Special Jury Prize at Annecy and the bronze medal at Venice. Over the years he has been celebrated around the world both as an animator and as an artist, having dabbled in a wide range of arts including sculpture, painting, illustration, and flip books.
Even now in his 80s, he is still very active as an artist and contributed a humourous short film Funkorogashi to Image Forum’s omnibus collection Tokyo Loop in 2006. Funkorogashi (see image at top of page), which poked fun at dog owners who resemble their pooches and allow the dogs to poop all over town, was in Kuri’s signature style: minimalistic line drawing animation (black on a white background) with some sections coloured in with bold reds, greens, yellows, and blues. It also demonstrated that he has retained his school boy humour after all these years.

It has taken me some time to warm up to Kuri’s work as an experimental animator. Normally, I am rather fond of black humour (Chaplin’s Monsieur Verdoux and Ealing Studios’ Kind Hearts and Coronets rate as 2 of my favourite comedies of all time) and, as a big fan of Buster Keaton, I do appreciate a good visual gag. But, the often sexist representation of women in Kuri’s films more often than not leaves me feeling cold.

On a purely aesthetic level, I appreciate the truly innovative use of the soundtrack in Kuri’s films. In an interview on his Takun Films DVD (sold by Anido), Taku Furukawa (古川タク) says that he and Kuri often did all the voices themselves. . . even the female ones such as the male and female Olympic athletes comically chanting “Chu Chu Chu Chu” in Au Fou! (Satsujin Kyōjidai, 1965, 13’). He also used the skills of cutting edge avant-garde composers of the day including not only Toru Takemitsu but also Akiyama Kunihara (1929-1996), Hayashi Hikaru (b.1933), Yoko Ono (b. 1933, yes, John Lennon’s wife), and also Ono’s first husband, the brilliant composer Toshi Ichiyanagi (b. 1933). The soundtracks interact in fascinating and unexpected ways with the animation.

Kuri makes a cameo appearance in 'Chair'
The film that brought me to a greater appreciation of Yoji Kuri as an experimental animator was Chair (Isu/ 椅子, 1964). My first thought upon seeing this film was that it must have been at least in part inspired by Norman McLaren and Claude Jutra’s stop motion film A Chairy Tale (1957). McLaren’s films were brought to Japan in the late 1950s and as Kuri had been attending international festivals throughout the early 1960s, I would be surprised if he had not seen the film.

The premise of Chair is this: Kuri asked a number of people from a wide variety of walks of life to sit on a chair for 15 minutes in front of his single camera set-up. In the opening title card he asks the spectator to imagine what they would do with the time and says that the film is about the unease that modern people feel when they don’t have anything to do. The regular people (a school teacher, a young girl, a university student, a salaryman, a Buddhist priest, a cop, among many others) were paid a fee for their time, while the celebrity figures such as artist Taro Okamoto (岡本太郎), singer George Ai (アイ・ジョジ), the poet Shuntaro Tanikawa (谷川俊太郎), and the aforementioned composer Ishiyangi (一柳慧) did not receive any payment for their services.

I don’t know if Kuri actually edited out frames of the film by hand or if he used a time-lapse camera technique of shooting a frame every so many seconds (This is the most likely case: time-lapse as a technique does date back to the silent films of Georges Méliès and Arnold Fanck ), but the end result is that the 15 minutes are reduced to a matter of seconds. The result is mesmerising. The most impatient people are made comical by the jerky movements that result from the time-lapse effect.

I wondered when watching if all the participants were aware of the camera, because most seemed to pay it no heed at all. Some, like Kuri himself (see screencaps above) who is the last subject before the camera, clearly did know and probably plan what he would do. Many of the subjects are very patient at waiting (surprisingly one young child does the best job of doing absolutely nothing) while others fidget and move about. Some seem to have come prepared with things to occupy themselves with, while others only have the chair to interact with. The junior high school teacher inexplicably takes off his clothes down almost to his skivvies then gets dressed again.

This kind of film is, in my opinion, experimental film at its best: when an everyday situation is turned made extraordinary and the spectator has to re-evaluate something that they take for granted. Although the film is over 40 years old now, it still seems very contemporary. Some would say that people find waiting even more difficult now than at any time before because the young generation with their keitais (mobile phones) and iphones don’t know how to ‘do nothing’. It would be interesting to do this same experiment with today’s generation. Would all the subjects just text message their time away? To answer the question in the title card “What would you do?” I just thought about what I do in waiting rooms or on trains: I always have a book with me so I would be reading and crossing and re-crossing my legs.

What would YOU do with your 15 minutes?