Noriaki Tsuchimoto: The Life of a Documentary Filmmaker 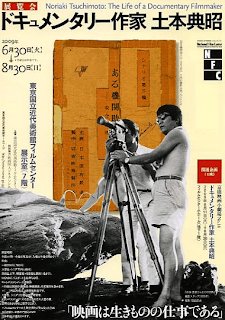 June 24th of this year marked the first anniversary of the death of leading documentary filmmaker Noriaki Tsuchimoto (土本典昭, 1928-2008) . Tsuchimoto’s career was marked by a willingness to take risks with politically sensitive causes. He was best known for his series of films examining the impact of Minamata disease: the notorious mercury poisoning scandal that rocked post-war Japan.
Born in Gifu prefecture in 1928 but raised in Tokyo, Tsuchimoto joined the Japanese Communist Party while studying at Waseda University in 1946. He began working at Iwanami Film Studios in 1956 where he learnt filmmaking and got to know other documentary filmmakers such as Kazuo Kuroki and Shinsuke Ogawa. His career was shaped in part by the cinematographer Seiji Yoshino who served on the board at Iwanami. Initially, Tsuchimoto worked on promotional films, but then made his first foray as a director with his film Aru Kikanjoshi (An Engineer’s Assistant, 1963). Important works in his career included Chua Swee-Lin (Exchange Student, 1965) about the prejudice felt by a Malaysian-Chinese student at a Japanese university, Paruchizan Zenshi (Prehistory of the Partisans, 1969) about student extremists, Minamata: Kanja-san to sono sekai (Minamata: The Victims and Their World, 1972), and Umi-tori shimokita hanto hamasekine (Stolen Sea: Shimokita Peninsula, 1984) about a traditional community threatened by commercial interests.

In 1989, Tsuchimoto went outside of Japan to make the film Afghan Spring (1989) in collaboration with Hiroko Kumagai and the Afghan filmmaker Abdul Latif. This film looked at society and politics in Afghanistan as the Soviets were withdrawing from the region. The film has become an invaluable artifact of a culture and community later destroyed by the Taliban.
In his later years, Tsuchimoto devoted much of his time to writing and political activism. He continued to bring awareness to the victims of Minamata with a 1996 exhibition called Minamata-Tokyo which gathered over a thousand photographed of the suffering victims of this dreadful disease. Tsuchimoto’s works shocked audiences with their subject matter and his compassion for the people he profiled was self-evident.

A documentary about his career entitled Cinema is About Documenting Lives (映画は生きものの記録である 土本典昭の仕事) was produced by Toshi Fujiwara in 2007. Here is the trailer:


The National Film Center’s exhibition includes photographs and mementos owned by his family, friends, and peers. A documentary on his life will be screened in the small auditorium. Throughout the summer Tsuchimoto’s films will be screened at NFC, and there will also be three events with guest speakers discussing his life and career. The exhibition opened on June 30th and will run until the 30th of August. For more information, visit the NFC's website. 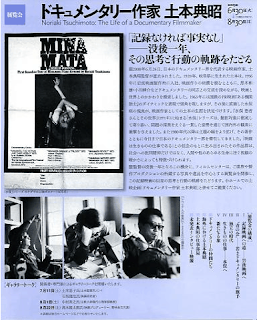