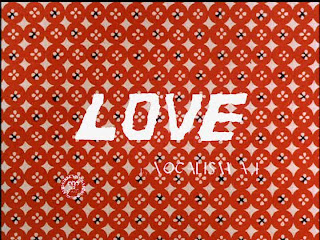 I think that it is safe to say that Freud would have had a field day with the animated shorts of the grandfather / bad boy of Japanese alternative animation Yōji Kuri (久里洋二, b. 1928). His black, and often bawdy, sense of humour pervades the mood of most of his films.  In his 1963 film Love (愛, 1963), a big woman with prominent breasts breathily gasps the word “Ai” (Love) repeatedly as she chases a man who is much smaller than her. The woman is depicted as being so desperate for love that she even embraces trees in frustration. In contrast, the man seems repulsed by her attention and races to keep himself out of her clutches.
In one moment, the woman clutches the man as if he were an infant or a ragdoll and he transforms into a giant drop of water in order to slip from her grasp and escape. The man also chants the word “Ai” but in a less passionate, more matter-of-fact manner. The couple play a kind of hide-and-go-seek amongst a row of trees. The woman chases the man with a net as if he were a butterfly. Once captured, she consumes him whole, only to have him come out the other end and escape again.
She chases him through a gallery lined with portraits of the man and through an empty café with identical tables. Their chants of “Ai” are sometimes whispered, sometimes shouted at top volume, increasing in tempo and desperation. The woman’s arms stretch out to an impossible length in order to grab the man again. In another scene, he stands on all fours like a doll on a leash and eats his food on the floor.

Order the Collected Works of Yoji Kuri
The chase grows increasingly desperate with the woman beating the man into submission with a baseball bat, reducing him to a stuttering idiot in their shared bed, and putting a leash on him and taking him on a walk. The ends with the soundtrack fading out as the man leads the woman into the horizon like a dog on a leash.
This animated short is based on a poem by Shuntarō Tanikawa (谷川 俊太郎, b. 1931) with music composed by Tōru Takemitsu (武満 徹, 1930-96). Takemitsu is perhaps best remembered today for his composition of soundtracks for the films of great directors like Akira Kurosawa (Ran

, Woman in the Dunes

) and for his significant contributions to aesthetics and music theory. I am a fan of Takemitsu’s early experimental period, and his anti-academic Jikken Kōbō (experimental workshop) had a profound impact on the animator Yōji Kuri, who has used experimental composers like Takemitsu extensively in his films.
The soundtrack of Love does not fall into the category of “music” in the classical sense, but in the postmodern sense of creating music using unconventional techniques and instruments. The recorded voices (H. Mizushima and Kyōko Kishida) have been distorted using a synthesizer. Sometimes the voices draw out, like a record playing at the wrong speed, or at other times they playback at pitches impossible for the human voice to attain. The tempo and volume is varied in order to create tension.
Love demonstrates the misogyny that is a prevalent theme in Kuri’s work. He frequently depicts women as either obese or having exaggerated or grotesque features. The portrayal of a large woman dominating a small, seemingly helpless man is a common motif in his work. The film unambiguously suggests a fear of female sexuality and a man’s fear of being controlled or dominated by a female partner.  Kuri emphasizes the feeling of entrapment through his use of perspective with the long labyrinthine art gallery, row of trees, and long arcade.  Kuri's depiction of "love" is claustrophobic and abusive.
Love is a fine example of Kuri’s characteristic minimalistic animation and illustration style. The characters are drawn in a clean, minimalistic style reminiscent of the work of New Yorker illustrator Saul Steinberg. Kuri’s illustration style is antithetical to the popular manga and anime styles of the day. The film is, however, given a Japanese aesthetic through Kuri’s choices of cloth and paper cut-outs: the pattern behind the title card and the pattern used on the tables in the café and on rooftops are all very typical of traditional Japanese paper and cloth patterns.
Kuri’s films Love, Clap Vocalism, The Chair, and AOS were joint winners of the Noburō Ōfuji Award in 1965 along with Tadanari Okamoto’s film A Wonderful Medicine. In fact, this review is part of Nishikata Film Review’s  2011 Noburo Ofuji Award Challenge.