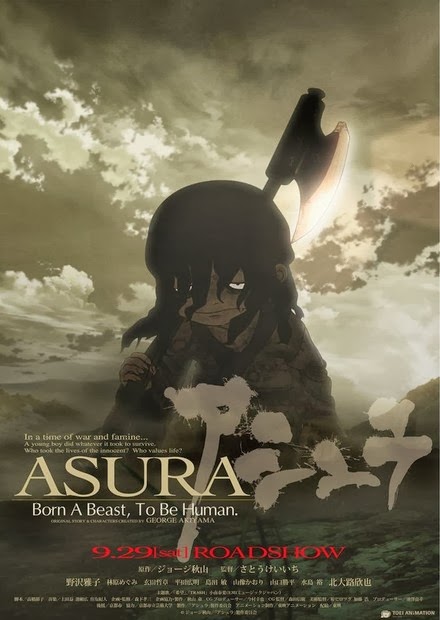 From the Roman legend of Romulus and Remus to Rudyard Kipling’s Mowgli, tales of feral children – or what the Japanese call yaseiji (野生児) – have long captured the imagination of storytellers.  These folktales, legends, and myths fascinate because they deal with the age-old question of what distinguishes human beings from other animals.  Can an abandoned child who has had to survive on its own in the wild learn human traits such as empathy, social skills, language, and most importantly, love?

Of all the tales of feral children that I have read or seen on film, Keiichi Sato’s animated feature Asura (アシュラ/Ashura, 2012) is undoubtedly the most brutal.  It is adapted from George Akiyama’s infamous manga of the same name, which was banned in many parts of Japan when it was first published in the Weekly Shōnen Magazine (1970-1) for its depiction of grotesque acts of human violence including cannibalism.  However, Akiyama’s tale is no more depraved than the ancient Buddhist tales that inspired him.  According to legend, the Asuras were lower gods who were unduly influenced by human passions such as wrath, pride, envy, falseness, boasting, and bellicosity (a predisposition to violence).   The Asura represent the human soul at its most depraved and egotistical, overwhelmed by an urge to fight and argue with others. 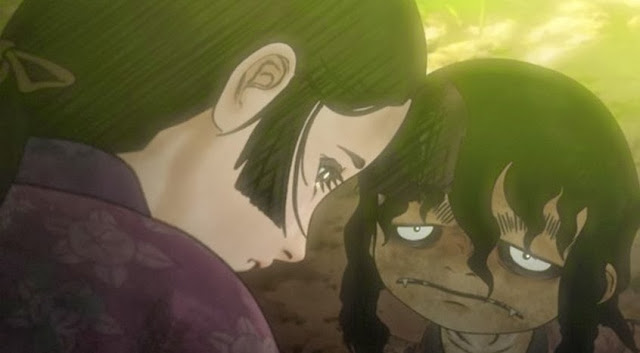 The feral child in Asura acquires his name from a Buddhist monk (Kinya Kitaoji), who recognizes his similarity to the legendary Asuras.  The child Asura (Masako Nozawa) is born to a desperate world of drought and famine.  Set in 15th century Kyoto at a time when the country is on the verge of a bloody civil war, Asura is abandoned by his mother and learns to survive in a dog-like manner.  He knows only suffering and uses violence as his only means of survival.

Most of the people that Asura encounters treat him with fear, disgust, or loathing but two kindly people try to help him and save him from his destructive tendencies.  The first is the Buddhist monk who teaches him how to speak a few words and tries to appeal to his humanity through Buddhist thought.  The second is a young woman called Wakasa (Megumi Hayashibara), who takes pity on Asura and secretly looks after him and makes a concerted effort to tame him. 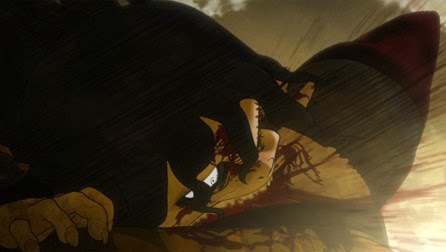 This is not an animation for the faint-hearted.  The violence is graphic and shocking.  Asura’s path to taming the beast within himself is filled with obstacles that he may not be able to overcome.  Although I am not usually a fan of films that depict extreme violence, it was impossible not to be impressed with the visual design of Asura.  A fascinating mixture of hand-drawn and CGI animation, the adaptation remains true to the spirit of the original manga while at the same time transporting us into the world of Asura in an emotional way that only animation can achieve.

Asura tied for the Audience Award for Best Animated Feature at the 16th Fantasia International Film Festival in Montreal.  I saw the film at Nippon Connection 2013.

The film is available on DVD and Bluray in Japan (JP only). The soundtrack is also available for order.