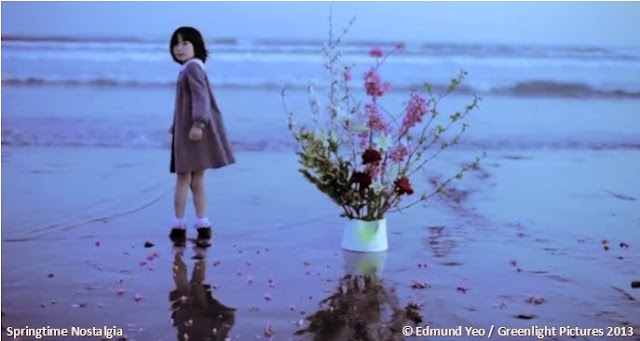 Ikebana is seldom used as a motif in movies.  Watching Edmund Yeo’s latest short film Springtime Nostalgia (残香/Zankō, 2013), it occurred to me that the art of filmmaking and the art of ikebana actually have many things in common.  Both capture the ephemerality of the natural world in a structured way and invite us to observe and reflect upon these aspects of the world that we live in.

Edmund Yeo’s short films give the impression that the filmmaker judiciously plans each frame and edit of his films just as carefully as the ikebana artist selects flowers and branches and meticulously trims and arranges them.  Just as ikebana shuns the ribbons and bows of European floral design, there are no unnecessary adornments in Springtime Nostalgia.  The emphasis is on the actors and the settings. The lack of music focusses our attention on the subtlety of the soundtrack with natural sounds such as the sound of the sea and local birds adding nuance to the poetic visuals.  My birder husband remarked upon the sound of the Japanese bush warbler whose “hō-hoke-kyo” call is one of the iconic sounds of spring. The central narrative concerns a woman (Kiki Sugino) who loses her sense of smell after her lover (Akira Orihara) disappears.  The man had loved ikebana and as part of her search for him she joins an ikebana class.  Here the woman’s story crosses paths with the lives of an elegant ikebana teacher (Quoko Kudo) and her daughter (Eriko Ono) who may have a connection with the missing man.

Words are inadequate to describe Springtime Nostalgia because so much of the story concerns ideas and feelings evoked by the visual metaphors of the film:  the flower arrangements placed in scenes, the petals on the ground, actress and producer Kiki Sugino’s expressive face as she contemplates the flowers that she cannot smell, and so on.  Past and present overlap one another in this mysterious tale of love and loss, time and memory.  Even the central protagonist herself is uncertain which parts of her story are real and which are a dream, like a “lovely, lingering scent” (the zankō of the official Japanese title) stirring distant memories from the recesses of one’s mind. 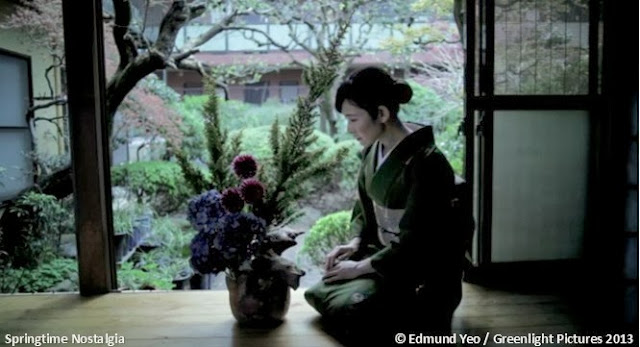 The most famous connection between ikebana and film can be found in the films of Hiroshi Teshigahara, whose father Sōfū Teshigahara established the famous Sōgetsu School of Ikebana whose daughter Akane Teshigahara heads the school today.   Teshigahara profiled his father and the Sōgetsu School in his 1956 documentary Ikebana (蒼風とオブジェ いけばな / Sōfū to Objet Ikebana).  Edmund Yeo talks about his rediscovery of the films of Teshigahara during the making of Springtime Nostalgia  on his website.  Would love to hear from readers about other films that feature ikebana.  Let me know in the comments.