This low-budget, subtly evoked independent film was the sleeper success story of 2006 in Japan. Mainly through word-of-mouth and other grassroots advertising (I heard about it via a flyer I found at Moomin Café & Bakery in Korakuen) this film enjoyed a quite sizable audience during its limited run in theatres.

) made its appearance in Japanese rental shops. As the DVD has English subtitles for both the Japanese and Finnish dialogue, I could no longer resist the allure of the quirky image of three pleasant-looking, smartly dressed, middle-aged ladies making onigiri (rice balls) in a sleek modern kitchen that looks straight out of a Muji catalogue.

We are first introduced to Sachie (Satomi Kobayashi/小林聡美), an independent-minded single woman on the young side of that murky category known as middle-aged. She has chosen to open a diner specializing in Japanese “soul food” in Helsinki. The centerpiece of her menu is onigiri (rice balls), which I personally consider to be more the Japanese equivalent of a sandwich rather than “soul food” (I would put my Japanese soul food vote with nabemono), but it works well in the film.

Unfortunately, the Finns do not seem to be of an adventurous nature when it comes to trying out new things, and for the first month Sachie and her spotless diner wait in vain for customers to enter the premises. Three elderly ladies come by every day to peek in the window, but scurry away as soon as Sachie spots them and tries to offer them a welcoming smile.

Finally, her first customer, Tommi (Jarkko Niemi) enters and orders a coffee. Tommi is a fledgling student of Japanese, which he tentatively tries out on Sachie. As he warms up to her, he asks her if she knows the words to the Gatchaman song – the theme tune from a popular 1970s anime Science Ninja Team Gatchaman (科学忍者隊ガッチャマン).

Sachie recalls the tune but not the lyrics and they continue to haunt her after their meeting. Fortunately, she spots fellow ex-pat Midori (Hairi Katagiri/ 片桐はいり) sitting alone in the café of a bookstore.

Midori has only just recently arrived in Finland on a whim (the old close your eyes and point at the map trick), and fortuitously knows the Gatchaman song by heart. In gratitude for her help with the lyrics, Sachie invites Midori to stay with her for the duration of her time in Finland. In return, Midori offers to lend a hand in the café and soon realizes that Sachie has only one customer, Tommi, who actually causes her to lose money as she insists on giving him coffee for free indefinitely in honour of his being her first customer.

Midori wants to help Sachie make the Ruokala Lokki (Kamome Shokudo in Finnish) café into a success, so she suggests that they try to use Finnish ingredients in the onigiri. Amusingly, in the film the Finns treat the onigiri with suspicion, as though it might be fugu sashimi (raw poisonous blowfish). Sachie is willing to give in a try and the two ladies sit down with Tommi to test out Midori’s theory.

The trio are not convinced by their results and are disheartened. Then one morning, Sachie decides to bake fresh cinnamon rolls. This bolt from the blue, combined with a mysterious visit from a man who teaches her a spell for making coffee delicious (pushing ones finger gently into the centre of the coffee grains and saying “Kopi Luak” before pouring the water), convinces the three Finnish ladies to finally overcome their shyness and enter the café.

Gradually other customers follow, including Masako (Masako Motai/ もたいまさこ), a woman who has spent her life caring for her elderly parents and now has the freedom to travel. She, like Sachie and Midori, has been lured to Finland by the impression that the country is restful and the people easy-going. Unfortunately, her luggage is missing and she comes to the café to seek advice from her compatriots about what she should do with herself. Thus our trio of Japanese ladies on very personal journeys in Finland is complete and we follow the women as they learn more about each other and the community about them.

The film was shot in an actual café called Kahvila Suomi (Café Finland) – which explains why the colour scheme in the café is based on the colours of the Finnish flag – on location in Helsinki, as pictured on this Japanese blog: Dalahast and cinematography is beautiful in its simplicity. Tuomo Virtanen, a cinematographer with a wide range of experience in directing everything from commercials to documentaries, employs mainly still framing throughout the film and fills each scene with a lot of light (quite apt for a Finnish summer). The light is essential to keep the film from slipping towards a more melancholic mood.

Women play a vital role both on- and off-screen in this Japan-Finland co-production. Director Naoko Ogigami (荻上直子) adapted a story by popular novelist Yoko Mure (群ようこ). Yet, although Japanese women are at the heart of this film, the charm of the film stems from the rapport between Finnish and Japanese elements. Great character actors like Tarja Markus, who plays “the angry woman” Liisa turns out to be a force that brings the Japanese women closer to each other and also makes them a part of the community. Markku Peltola, who has starred in four of Aki Kaurismäki’s films, also has a memorable cameo as the broken man who used to run the café.

The popularity of the film most likely lies in its subtle humour and its appeal to women of a certain age in Japan, who find themselves in a similar situation to these ladies: unmarried career women or, as in the case of Masako, women who have stayed single in order to care for their elderly parents, who find themselves at a crossroads in their lives. Seeking answers about what to do with their future, they look outside Japan and follow childhood dreams to see places they read about or watched on TV.

In the case of Finland, the country is best known for Tove Janssen’s endearing little trolls the Moomins shot to fame in the 1970s when the books were animated. The real peak came in the 1990s when a Finnish-Japanese co-production made a new series. Not only do Moomins fall into the “kawaii” (cute) category in Japan, but their quirky, thoughtful ways and their closeness to nature make them very appealing characters. The idealized world of the Moomins can be felt in the scene when Masako goes off in search of forests.

I reveled in the quirkiness of the characters and dialogue in this film and in the delightful portrayal of independent women. The films greatest strength is in evoking what it is like to be an outsider in a community and the gradual way, through patience and small daily efforts, a person can become a part of their new environment. The film may frustrate people who are used simplistic Hollywood plots because the film does not give up its secrets easily.

The film has a sparing editing style and there is little or no mood music throughout much of the film. It will appeal to people who enjoy films like Le Fabuleux destin d’Amélie Poulain

. Ogigami doesn’t give us all the background information about the characters that we may desire, but she allows us to fill those gaps with our own imaginations. I identified very strongly with these women searching for something in life that is very hard to define, but in the end may just be a feeling of contentment with oneself combined with a sense of belonging to a community.

[for an interesting paper by a Finn living in Japan on the film, check out the words of Juha Niemi.] 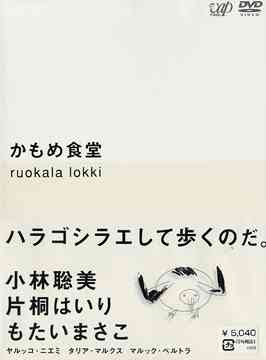