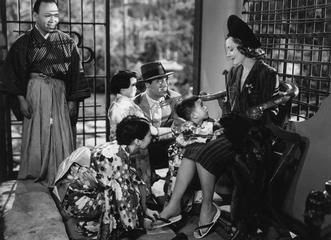 Penny Serenade (George Stevens, 1941) is a classic example of a weepie: a drama, usually romantic in nature, designed to make its audience weep buckets by the time it’s through. Favourites of mine in the genre are the Bette Davis vehicles Dark Victory (Edmund Goulding, 1939) and All This, and Heaven Too (Anatole Litvak, 1940). Although the term ‘weepies’ isn’t used as much these days, they are still being made. A very good recent example is The Notebook: Nick Cassavetes’s sleeper hit of 2004 starring Rachel McAdams and Ryan Gosling.
Penny Serenade is also an example of a film that is hard to talk about without giving away plot points designed to take you by surprise and pull at your heartstrings. So if you plan on seeing this film and want the full shock value of all the obstacles thrown Irene Dunne and Cary Grant’s way, don’t read past this paragraph but skip to the final paragraph for my recommendation. Although I plan to tread judiciously in order to avoid too many spoilers, I wouldn’t be able to write about the film at all without mentioning a couple key plot points that were quite a shock to me right at the beginning.


The film opens in a melancholy mood with Julie (Irene Dunne) and Roger (Cary Grant) on the verge of divorce because, as Julie sadly tells their devastated friend Applejack (Edgar Buchanan), they just don’t seem to need each other anymore. Applejack tries to convince Julie otherwise and leaves her alone with a scrapbook of records and other mementos the couple has collected over the years. Julie then begins playing the records one-by-one and relives the memories of her relationship with Roger.

The transitions to the flashbacks are done in a very clever way. Instead of the usual dissolve to the past, they have gone for an iris in and out over an image of the record of the tune that evokes each memory. The tagline for the film is “Remember the tune they were singing. . . the night we fell in love?” For Julie and Roger that song was Freed & Brown’s “You Were Meant for Me”, a song from the late 1920s that would no doubt evoke nostalgia on the part of the original 1941 audience watching the film. As would the collection of other nostalgic songs of the 20s and 30s referenced during the course of the film: “Just a Memory”, “The Waltz”, “I’m Tickled Pink with a Blue-Eyed Baby”, and “The Moon was Yellow.”


The couple meet when Roger spots Julie working in a record shop and after a whirlwind romance, they marry hastily on New Year’s Eve just hours before Roger ships off to on assignment for the newspaper that he works for as a journalist. They have a romantic tryst on the train (shot in a very titillating way for 1941!) which results in Julie being pregnant when she joins him in three months later. 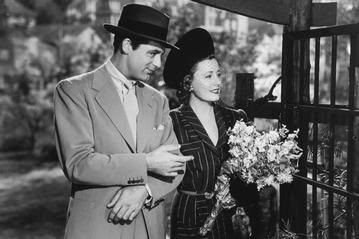 The segment of the film set in really took me by surprise for two reasons: there was no suggestion of it on the DVD cover and it was a remarkably positive portrayal of given that the precarious international situation at the time. Penny Serenade was released in April 1941, just 9 months before the attack on , and it portrays as a quaint, exotic local with cute children, lovely clothes, fancy gardens, and elegant homes. Par for the course for this time period everything has clearly been shot in a studio. Also, all the “Japanese” look and sound like the actors may be of Chinese or other Asian backgrounds, and great liberties have been taken with the costume and set design, but I would imagine the audience would leave with a very positive impression of as a travel destination.
Until of course, the earthquake hits and begins a series of tragedies for the young couple. Julie loses their baby when the house collapses on her and is rushed to for treatment. There the couple discover that Julie’s injuries mean that she will not be able to have children and Julie is devastated. Roger is more difficult to read than Julie (during the first half of the film he often puts on a false front designed to show Julie what she wants to see), but we later learn that he too loves children.
They move to the countryside, where Roger has begun his own small newspaper and they decide, with prodding from Applejack, to adopt a child. Little Trina brings a lot of love and magic into Julie and Roger’s lives, but I’m afraid that there are many more tears in store before this movie draws to its conclusion, but I will allow you to discover how this movie turns out for yourself. 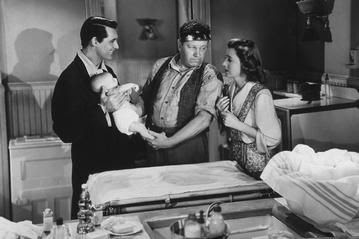 Cary Grant was nominated for an Oscar for playing Roger, but lost out to Donald Crisp in Ford’s How Green Was My Valley (the biggest film at the Oscars in 1942). Grant’s nomination was no doubt due to the memorable scene in which he heart-rendingly begs the judge not to take Trina away from them just because they are having financial difficulties. Up until that moment, his character had been more of a charmer than a man with hidden depths.
Irene Dunne looks as stunningly beautiful as ever and plays Julie with a great deal of delicacy. Rather then turn on the waterworks all the time, which would have grown dull rather fast, Dunne has mastered the art of looking like she could cry at any given moment but that she’s holding them in with her pride. My strongest memory of this film is of her sorrowful, doe-like eyes welled up with tears.


The cast is rounded off by two of the greatest character actors of all time: Beulah Bondi (best known for playing George’s mother in It’s a Wonderful Life) and Edgar Buchanan (from the 60s TV comedy series Petticoat Junction). Bondi plays Miss Oliver, the adoption agency representative who puts on a professional front but is really a soft-hearted soul underneath. Buchanan keeps the film light with his comedic turn as Applejack Carney, a friend to both Julie and Roger, who keeps them both in check and gives them each a little nudge in the right direction whenever it’s needed.


This is not a first date movie, so watch it with someone you’re in a committed relationship with or with a girlfriend. It would make uneasy viewing for someone with cold feet about committing to a long-term relationship because of all the difficult issues it raises. I highly recommend this film for a girls’ night in. It’s not an easy film to watch alone, so curl up on the sofa with a friend and a hot toddy and weep away together.