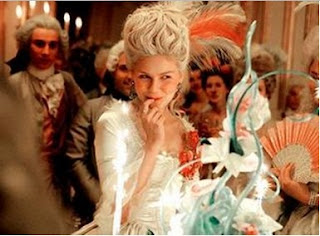 Sofia Coppola’s vacuous film Marie Antoinette (2006) is as decadent as the aristocratic world it portrays.The ingredients of this confectionery of a film include a high volume pop soundtrack, sumptuous costumes, Manolo Blahnik shoes, elaborately arranged dinners and desserts, and of course, the most luxurious set imaginable: Versailles.

It is a shame that all this elegance and attention to visual detail was not also applied to the script. I must admit that I really, really want to like Sofia Coppola’s films, but she grates my feminist soul the wrong way.Off the top of my head, I can count but a handful of interesting women directors in Hollywood since the heyday of Dorothy Arzner and I am yearning for a woman with a unique style who is willing to take artistic risks but still make an enjoyable movie to burst onto the scene (Zoe Cassavetes has good lineage, but the response to the debut of her new film Broken English at Sundance has been disappointingly muted).

In Sofia Coppola’s case, it is hard to get enthusiastic about a woman director whose camera does not provide us a with new perspective on the lives of women. This is Coppola’s third film about troubled young women and rather than show us the world from the female protagonist’s point of view, we are invited to look voyeuristically upon these women as objects of male desire.

The Virgin Suicides (1999) offered up the world of the  sisters from the perspective of the adolescent boys who lusted after them, complete with a male narrator. In Lost in Translation (2003) Scarlett Johansson spends half the film traipsing about her upscale  hotel in her underpants. Marie Antoinette continues in the same vein, inviting us to admire Marie Antoinette, played coquettishly by Kirsten Dunst, in her various stages of dress and undress.

Coppola rarely offers us access to the inner workings of Marie Antoinette’s mind. Most of the information about her comes in the form of salacious court gossip or in grand intonations of her mother, the great Maria Theresa of Austria (played ably by Marianne Faithfull), who writes her condescending letters imploring her to act in a more politically astute fashion that will benefit her family and her country of birth.

While in many ways this reflects much of the argument of Antonia Fraser’s biography of Marie Antoinette (the inspiration for Coppola’s film) which argues that the Dauphine was a political pawn, it does not do justice to the fact that Marie Antoinette was a witty, intelligent, and articulate woman in her own right who also wrote as well as received an epic correspondence. Where are her responses to her mother’s letters in this film? Indeed, where is her voice and personality at all?

Marie Antoinette’s only “character development” seems to be a random affair with the Swedish officer, Count Ferson (played by newcomer Jamie Dornan) – which appears to have been thrown in merely in order to get a great poster shot of Kirsten Dunst in a seductive pose wearing lingerie – her mother’s death, and the death of her second son – which is only depicted cryptically through the changing of portraits on the wall.How are we expected to swallow her sudden transformation from freewheeling party girl to serious, supportive wife at the end of the film with these hastily mentioned plot points?

In the end, I found the film an expensive-looking advertisement for the soundtrack (which tries to be avant-garde but actually comes off as rather cliché), accessory tie-ins, and the French tourist industry. Someone should really sit Sofia Coppola down and have her watch Patricia Rozema’s Mansfield Park (1999), Jane Campion’s An Angel at My Table (1990), Claire Denis’s Chocolat (1988), or Dorothy Arzner’s Christopher Strong (1933) so she can see what interesting films can be made when a woman is in the director’s seat and actively challenges the status quo a bit.