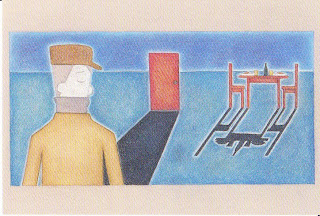 Acclaimed animator and artist, Tomoyasu Murata (村田朋泰), has opened a new exhibit at Gallery Momo in Roppongi called “Black Room & White Room.” Murata’s work embodies a wide variety of styles and techniques. If someone new to his work watched his film Sakadachi-kun (Handstand Boy) Intently Running (さかだちくんひたすら走る!, 2005) back-to-back with White Road (白の路, 2003) one would be surprised to discover that the artist is the same man.

Murata’s stop motion puppet work, as featured in the My Road Series and in his award-winning Nostalgia (睡蓮の人, 2000) is an example of pure cinema. There is no dialogue and meaning is created through metaphor, music, and character expression. Like reading a poem, these short films can only be fully understood through repeated viewing.

Murata’s hand-drawn and computer animated shorts, such as the Sakadachi-kun (Handstand Boy) series, while still open to interesting interpretation, represent the flip side of the Road Series. It is a less cerebral, more tongue-in-cheek kind of animation style. Thus the black and white rooms of the Gallery Momo exhibition seem to represent the dual nature of Murata’s artistic identity.

On one wall of the white room hang ten pastels inspired by themes and images from Murata’s most recent installment of his Road Series: Indigo Road (藍の路, 2006). The images are not reproductions of stills from the animation, rather they are creative interpretations of Indigo Road’s themes and motifs. In the picture at the top of this blog entry, for instance, the themes and motifs referenced include the melancholy of the main protagonist, the table set for two, the door to the apartment, and the predominance of shades of blue. See my review of the film for a still from the film.

The opposite wall of the white room features manga-style paintings of little Sakadachi-kun. I say “manga-style” because of the thick black outline of the figures. The Sakadachi-kun paintings have a seventies-retro air about them. Much of Murata’s manga-style / retro work reminds me of Andy Warhol.

The white room also contains a three-dimensional piece of art. On one side it appears to be an exterior apartment set in the style of the My Road Series, but the other side has miniature television sets playing various images. These portable televisions are a theme in Murata’s installation work and also appeared in his exhibition at H6 gallery on Hongo-dori last autumn. In that exhibition the TVs were incorporated among books on a large bookshelf.

The black room contains more surreal, colourful works, some of which feature little Sakadachi-kun. The example below, taken from the gallery’s website, appears to be an underwater scene featuring a figure in a scuba suit looking at brightly coloured coral or seaweed
.

In other paintings, although he looks exactly the same, the context leads me to read the suit and helmet as that of an astronaut. These images feature surreal landcapes, but with the star-like diamonds and planets shining on the landscape itself rather than in the sky. For an example, check out the artwork on Murata's homepage. Here is a screenshot: 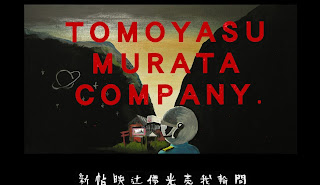 The black room also had two boxes, the size of small televisions that one could look down into. They resembled sets for a stop motion animation, but I did not recognize the scenes from any of the films of Murata’s that I have seen so far. Above these two boxes, hung a flatscreen on which one could view a selection of Murata’s short films.

The exhibition is a great introduction to the work of Tomoyasu Murata. Gallery Momo is small but welcoming. My friend and I were offered fresh coffee while we viewed the selection of animation. The artwork, DVDs, and other Murata souvenirs are available for purchase. One can also order them from tomoyasu.net.

This exhibition runs until March 2nd.