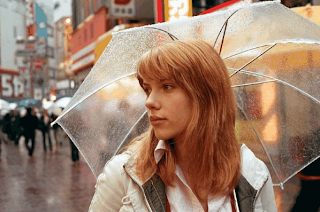 , has been quietly simmering away in the back of my mind for the past three years.

My husband and I went to see it on our first date since the birth of our son at the wonderful repertory cinema, the Exeter Picturehouse in Devon, England. My husband had just accepted a job at Tokyo University and we were heady with excitement at the prospect of moving to Tokyo. We met each other in Japan in 2001 and my husband, who speaks Japanese fluently, has fond memories of Tokyo dating back to his first stay there when he was just sixteen.

We entered the elegant cinema expecting to delight in details of recognition of things that we know and love about Japan. Instead we experienced one of the most uncomfortable viewing experiences I had ever had (not quite as bad as watching Makavejav’s sexually disturbing Montenegro

in university, but I was pretty fidgety). We found that while the British audience laughed at the puerile visual gags like Bill Murray towering above the Japanese occupants of an elevator or his sarcastic quips in response to a Suntory whiskey commercial director who refuses to engage with him in English, we just sat in silence. I could feel my husband growing more and more agitated throughout the film.

As we walked home along the Exe River my normally easy-going husband exploded with anger at what he termed the “stupidity” of the film. In particular, he found the rude language (toned down by the interpreter) of the commercial director extremely unlikely and over-the-top. We couldn’t quite figure out exactly why we hadn’t liked the film as a whole and speculated that perhaps it was because Japan isn’t so “lost in translation” to us. We just hadn’t been in on the joke. I wasn’t quite as annoyed as my husband at the representation of the Japanese in the film, but something had disturbed me about the film and I couldn’t yet place my finger on it.

The shakuhachi player Kiku Day, wrote a piece called “Totally lost in translation” for the Guardian accusing the film of racism, an accusation that was echoed on many blogs. I’m not so sure that I would use such a strong word as ‘racism’, but I do feel that the film goes for easy gags based on stereotypes about Japanese people and their culture. The film’s story doesn’t really engage on any meaningful level with its setting. For a while I speculated that the film could have been shot anywhere ‘non-Western’, but recently I am not so sure. Japan, with its veneer of “Americanisation” mixed with the exoticness of its unique Asian culture make it a particularly easy target for stereotype and misrepresentatation.

In January, I had my Japanese graduate students watch the film and read Kiku Day’s article. I was surprised to find that none of my students had seen the film and most had not even heard of it even though it is widely available in rental shops here. As we screened the film in class, the students did laugh at some of the jokes – in particular, the really quite funny scene in which a photographer asks Bill Murray’s character to invoke a feeling of Roger Moore (not Sean Connery!!) as James Bond.

In discussion afterward, my students told me that they felt it didn’t really show a very accurate image of contemporary Japan. Yes, Matthew Minami is a real TV presenter and people do enjoy pachinko and karaoke in Japan, but the middle-aged call girl and the extremely rude Suntory film director seemed unlikely. On the whole they had enjoyed the film, but felt that the Japanese characters were all one-dimensional.

Through re-screening the film in preparation for the class I finally realized why the film had made me feel uncomfortable the first time around: its sexist portrayal of women. It’s quite remarkable to me that a woman director could make a film that treats women so blatantly as objects, but she does. The film invites us to look at women as objects straight from the opening: an extended shot of Scarlett Johansson’s backside in see-through underpants. This portrayal of women as sexual objects is only magnified by the middle-aged call girl, who the script sets up as an object of ridicule and the random scene where Charlotte and Bob arrange to meet some of Charlotte’s friends in a bar that turns out to be an exotic strip club. Were these girls met to represent the “exoticness” of the locale? Was this scene even necessary?

As a female spectator, I can identify with Charlotte’s dilemma in the film: she has finished her education, gotten married, and has reached a crossroads where she isn’t sure what she wants to do next with her life. What I cannot relate to is her depiction as a “poor little rich girl.” She follows her husband to Tokyo on his business trip as a professional photographer then whines that he’s working all the time and isn’t making any time for her.

Despite the fact that she claims to Bob that she and her husband have friends in Tokyo, she seems to have nothing to do during the day. Her ‘friends’ only turn up when she wants to go out at night. There are so many wonderful restaurants and coffee shops to hang out in this town, I find it hard this hard to believe.

With her friends unavailable to distract her, she prances about her expensive hotel in her underpants listening to self-help audiotapes. She seems unable to find anything more exciting to do with herself in Tokyo apart from wander aimlessly about Shibuya and Roppongi acting generally bored with everything. I was relieved when she finally boarded the shinkansen and went to Kyoto to take in a bit of ‘culture’.

On one hand the film mocks educated women, while with a backhand it mocks uneducated women. For example, her husband makes comments that imply that Charlotte’s philosophy degree from Yale has made her snobby, and Charlotte herself is almost apologetic about telling people she studied philosophy. She then sneers at the Cameron Diaz-esque character Kelly (played by Anna Faris) for being stupid. Do we really need another film with a dippy blonde in it? ***Sigh***

The saving grace of this film for me is the irrepressible Bill Murray, whom I have loved since his SNL days. His wry, laid-back wit combined with his sheer bravery in allowing Sofia Coppola’s camera to linger over every pock-mark of his aging face resulted in some very fine comic scenes. Not wanting to slight Johansson as an actress, I must add that she did a commendable job in her role, I only wish that Coppola had given her better dialogue and filmed her in a more progressive manner. 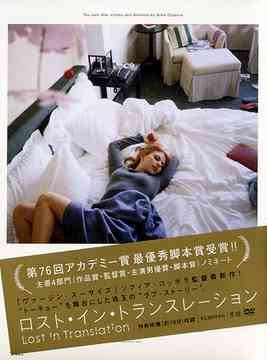