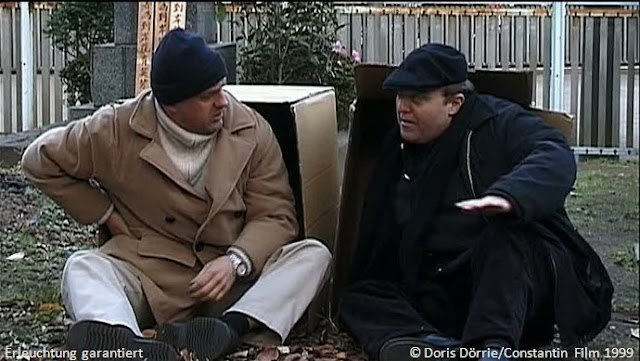 Brothers Uwe (Uwe Ochsenknecht) and Gustav (Gustav-Peter Wöhler) have very little in common with each other apart from their bad marriages.  Uwe is a self-absorbed kitchen salesman with four children whose wife Petra (Petra Zieser) gets fed up with him and walks out on their marriage.  Meanwhile, Gustav is in a sterile, childless relationship with his wife Ulrike (Ulrike Kriener).   Unlike chaotic Uwe, Gustav makes a concerted effort to find inner peace in his life, working as a Feng Shui expert, raking his miniature Zen Garden, memorizing Asian proverbs, and practicing meditation.

Consumed by grief over his failing marriage, Uwe crashes Gustav’s planned Zen Buddhist retreat to the Monzen monastery on the Noto Peninsula.  When the brothers arrive in Tokyo, Gustav’s façade of inner peace is torn away as both men find themselves overwhelmed by their new environment.  After a night on the town, the men are unable to find their hotel again and have run out of cash because they spent it all on booze.  Their inability to communicate with a taxi driver lands them in an unfamiliar neighbourhood,  and they wander aimlessly through the darkened city streets.  They eventually end up in the Taito ward where they follow the example of the homeless people there by spending the night sleeping in cardboard boxes.

The next morning, their situation does not improve and they manage to lose each other while crossing Shibuya’s famous scramble crossing in the middle of the day.  With Uwe armed only with his video camera, which he uses to record a video diary of his journey, and Gustav armed only with a book of Zen sayings, the two men must take on this next phase of their journey alone.  Eventually the brothers find each other again and make their way through a series of misadventures to the Monzen monastery where they are given the opportunity to see their lives from a new perspective through a regime of hard work and meditation.

Erleuchtung garantiert (Enlightenment Guaranteed/もんぜん, 1999) was shot entirely on digital video and has an intimate feel to it.  I enjoyed this film more than Doris Dörrie’s other Japan-themed feature Kirschblüten– Hanami (Cherry Blossoms, 2008) which was much hyped in the German media the year after I moved here from Tokyo.  The journey of self discovery in Cherry Blossoms seemed forced, whereas the story of Uwe and Gustav seems so effortless.  There is a realness and a spontaneity to the characters which reminded me of the works of Mike Leigh.  Above all, the humour that Uwe Ochsenknecht and Gustav-Peter Wöhler bring to their roles keeps the film from taking itself too seriously.  It's a great film for people reevaluating their own lives and in need of a good laugh at the inanities of human nature.


Enlightenment Guaranteed is one of five films that I wrote about for World Film Locations: Tokyo (ed. Chris MaGee, 2011).  I chose the Yanaka Cemetary as the location to focus on.  Support independent film critics by ordering the book today:

The film is available on DVD in the States: