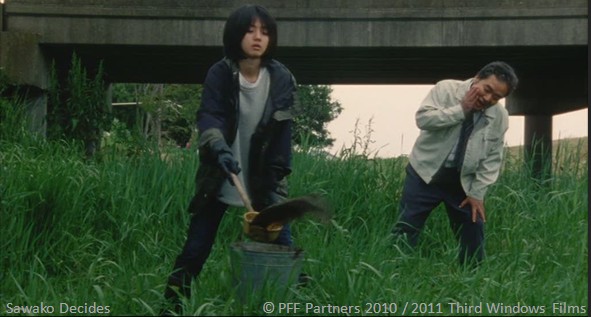 Hollywood has lost the plot when it comes to romantic comedies. Back in the genre’s golden years, actresses with solid acting chops and modest looks (Rosalind Russell, Katharine Hepburn) won over audiences by playing terrific characters that female audiences could identify with.  These days, female leads in romantic comedies tend to be cookie-cutter beautiful with shallow, egocentric issues that have little to do with the day-to-day concerns of real women.

This is not the case in Sawako Decides (川の底からこんにちは / Kawa no soko kara konnichi wa, 2010), where the main leading lady ranks herself as “lower middle” in the spectrum of women.  Sawako has average looks, meagre self esteem, and is lacking in professional ambition.  In the five years since she left her home town for Tokyo after a falling out with her widowed father, she has suffered through five dissatisfying jobs and is in her fifth disappointing relationship after being dumped by her previous four boyfriends.  She seems to be stuck in a cyclical rut when she gets word that her father is terminally ill with cirrhosis brought on by heavy drinking.

Sawako resists moving back to her home town to support her dying father and his wayward brother because it means having to face up to unresolved problems from her past, but her recently divorced boyfriend Kenichi coerces her into going.  Kenichi is looking for a fresh start for his life with his young daughter and sees potential in Sawako’s family business of packing freshwater crabs.  His daughter Kayoko, with her big mournful eyes, is more cautious than her father, but ultimately will be the first person to really connect with Sawako.

The choices that Sawako faces in this film are difficult and her decisions are not predictable, which only serves to make her character all the more human and likable.  Hikari Mitsushima (Love Exposure, Kakera) brings her trademark shy charm to the role and contrasts well with the more brash female characters such as her old childhood friend with a grudge and the gaggle of crab-packing women who are determined to make Sawako suffer a bit for her past sins before welcoming her back into the fold.  The wacky, screwball aspects of Yūya Ishii’s film keep it from wallowing too long in self-doubt and misery – though the unlikely subplot of a random Tokyo graduate student seducing a married fisherman should have been left on the cutting room floor.

All in all it is an enjoyable film that reminds us that no matter how average a person is, they need only work hard and look out for others in their community to enjoy a successful life.  As Sawako's family vegetable patch demonstrates, sometimes the most beautiful flowers can grow in the biggest dung heap.

Sawako Decides recently came out on DVD in the UK.  The distributor Third Window Films has been struggling to get back on top since they lost their stock in the Sony warehousefire during the London riots this summer.  Please support them by ordering their films on DVD or, if you like in the UK, watching them on MUBI.  The DVD includes an interview with the director as an extra.